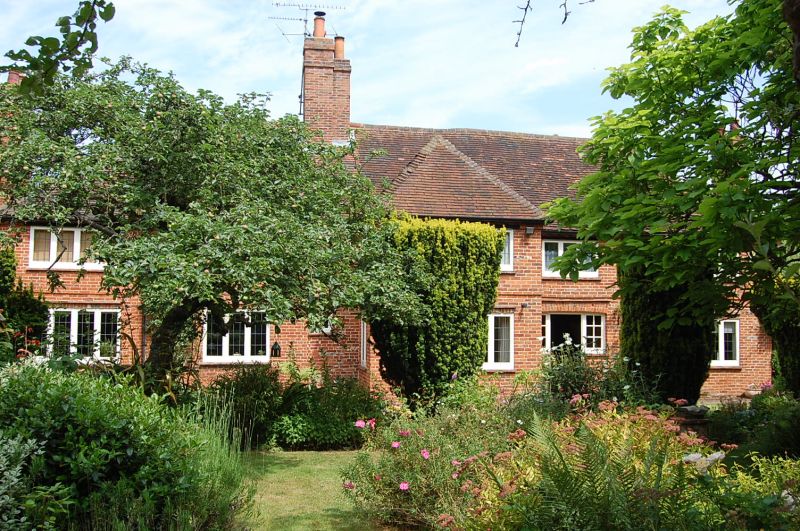 II
Goose Green Cottage, late-C16 with later modifications the main phases of which include the encasement of the frame in brick in 1713, a 1930s remodelling and late C20 and early C21 additions.

Off-centre entrance hall to the east; west-east corridor with central timber-framed partition wall providing access to the lounge, dining room and study in the south of the house with the service areas - the kitchen and utility - to the north-west and a playroom to the north-east. First floor west-east corridor along the northern side of the house providing access to four bedrooms and a bathroom arranged to its south.
EXTERIOR: Entrance elevation to the south of five-and-a-half bays, the half-bay housing the original chimney stack. Westernmost bay a post-1713 addition attested by a straight joint in the exterior brickwork. Central two-storey extension of 1930s date with hipped roof echoing the main house in fabric, form and detailing. Windows are largely C20 timber mullions with leaded lights. Tile detailing to the window hoods; also tile cills. Main entrance to the east of the 1930s extension and has a C20 plank door with flanking casements all under a shallow segmental arch. Brick string course separating the ground and first floor. Elevation decorated with vitrified blue brickwork at first floor level giving the date of the brick refronting as 1713. An off-centre clustered chimney stack; also end stacks to the west and east.

North garden front also in brick dominated by a cat-slide tile roof with two tile-hung gabled roof dormers to first floor. Late-C20 conservatory to west (which is not of special interest) and gabled three-storey cross-wing to east; the gable of which has modern brickwork indicating repair or remodelling. Windows are timber mullions with leaded lights as before. Brickwork to this elevation is much patched showing evidence of numerous interventions and repairs.

INTERIOR: Timber box-framing is exposed throughout mainly in large to medium sized pegged panels using substantial timbers. Carpenters' marks; also some diagonal bracing to the frame of the first floor corridor. Most panels have plastered infill but brick noggin also used i.e. the kitchen south wall. Substantial chamfered beams to lounge, dining room and study. Lounge and dining room divided by large original chimney stack. Both fireplaces are built with narrow bricks and are substantial: that to the lounge has a replaced bressumer and the dining-room fireplace has a brick basket arch. Evidence of previous modifications including former external doors (now blocked) to: lounge west wall; south of the chimney stack; former north external wall (now the north wall of the entrance hall); east end wall. Although the study and second bedroom both have a timber-framed west wall and the south wall of the playroom is also timber-framed, there is no frame visible further east which suggests that the eastern bay of the house is an addition. However, there is a chamfered cross beam to the study. Main staircase rises from the entrance hall, in oak, Art Deco in style. Secondary modern staircase to the play room.

Bedrooms 1 and 4 share the same original chimney stack with a large fireplace to bedroom 1 built in narrow bricks but with the original large opening reduced in size and a small 1930s brick fireplace inserted. Further small brick 1930s fireplaces can be found in bedrooms 2 and 3 and in the study.

Roof space only partially inspected but the eastern end has less substantial timbers than the remainder of the house, suggesting an addition of C18 or early- C19 date. C20 replacement of some rafters and repairs evident.

HISTORY: Although there are no records of its construction, Goose Green Cottage can be dated to the second half of the C16 on architectural grounds: large timber frame panels of this type are not generally found after the very early C17 but the central stack is a feature most commonly found post c1550. The house does not appear to be mentioned in a 1567 document known as The Crondall Customary which lists the one hundred or so dwellings in Yateley Tithing at that time.

In the early-C18 the house was refronted in brick the date of which - 1713 - is picked out in vitrified blue brick on the principal south elevation.

Architectural evidence suggests that both the western and eastern bays are additions. The western bay was built after the 1713 refronting, possibly associated with the Dingle family who bought the house in 1753. The date of the eastern bay is more difficult as there is no indication of a break in the brickwork of the south elevation (although it has clearly been re-worked at some time.) Possibly therefore the eastern bay is of pre-1713 date, although the roof appears to be later: perhaps a C18 or early-C19 remodelling of an earlier C17 bay. The historic plan was a three-and-a-half bay, lobby-entry house. The three historic bays are now in use as the easternmost half of the lounge, the northern part of the dining room and the entrance hall with the rear wall demarked by the current corridor partition wall. The main entrance would historically have opened against the chimney stack which forms the half-bay. Thus bedrooms 1 and 4 are within the original envelope but bedrooms 2 and 3 are within later extensions. The northern accommodation has clearly been modified and added to not least with the addition of a cross-wing to the north-east. The higher status end of the late- C16 house, the hall, was to the west and the 'low' end was to the east as can be demonstrated by comparing the quality of the chamfered beam to the lounge with the simpler example to the dining room to its east.

Occupants of the cottage are recorded in the Crondall Court Books of Admissions and Surrenders between 1752 and 1878. Also licensing records from the 1790s suggest that it was then a public house. The house is shown on the tithe map of 1844 as a single dwelling but by the time of the first edition Ordnance Survey map of 1871 it is divided into four. Whether this represents four individual cottages or a pair of cottages with attached outhouses to the west and east cannot be determined. Subsequent OS maps of 1896 and 1911 show the building divided into two L-shaped cottages. In the early C20 the house was, in part, a bakery. The easternmost half is shown with a projecting shopfront and 'Hovis' sign on the roof in a photograph of c1910, and the Land Tax Assessment of 1910 describes a timber and iron shopfront. One W B Tice ran the shop and held the lease between 1899 and 1925. By the 1930s it was again a single dwelling and is shown as such on the 1932 OS map. To this date can be attributed the central southern dining room extension, the small brick fireplaces and the Art Deco main staircase. The house was owned by the Chenevix-Trench family between 1930 and 1933 who may well have been responsible for this remodelling.

In the late-C20 and early-C21 further modifications have included: the replacement of the battens and felt to the roof and its re-tiling (re-using the historic tiles); modifications to the utility area (centre rear, of 2002) and the erection of a conservatory to the west in 2006 (also not of special interest).

REASON FOR DESIGNATION:
Goose Green Cottage, Yateley, a C16 timber-framed house with early-C18 and later modifications, is listed at Grade II for the following principal reasons:
* Architectural interest: a late-C16 lobby-entry plan cottage and thus a rare survival nationally, with later modifications of special architectural interest such as the early-C18 gentrification and refronting in brick.
* Intactness: a remarkably intact, substantial and solid oak box-frame with good detailing including peg joints, carpenters' marks and diagonal bracing; also a surviving monumental C16 chimney stack and fireplaces, albeit with some modifications.

Goose Green Cottage, Yateley, a C16 timber-framed house with early -C18 and later modifications, is listed at Grade II for the following principal reasons:
* Architectural interest: a late C16 lobby-entry plan cottage and thus a rare survival nationally, with later modifications of special architectural interest such as the early C18 gentrification and refronting in brick.
* Intactness: a remarkably intact, substantial and solid oak box-frame with good detailing including peg joints, carpenters' marks and diagonal bracing; also a surviving monumental C16 chimney stack and fireplaces, albeit with some modifications.