War Memorials to World War I and World War II, and Surrounding Walls, Paving and Approach 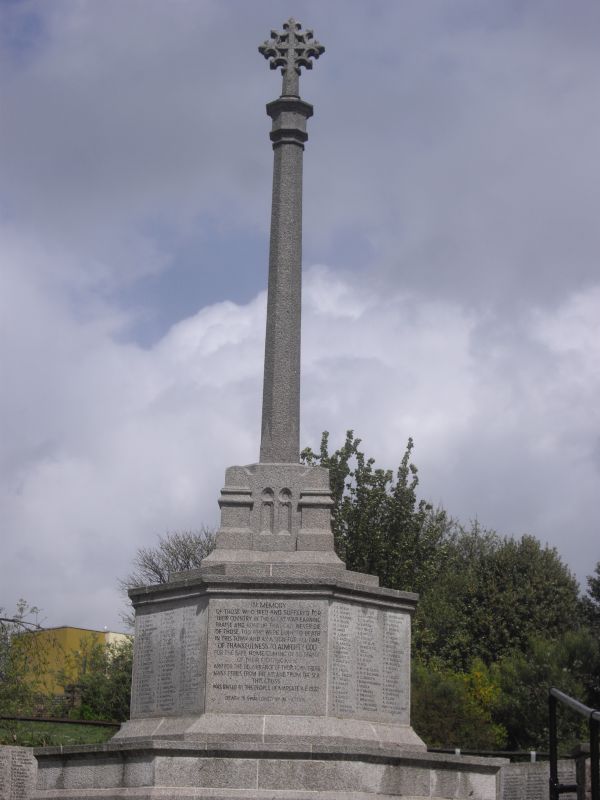 DESCRIPTION:
The World War I memorial is situated on rising ground in Trinity Square, originally in front of Holy Trinity Church (the church was demolished after World War II bomb damage). The memorial is in the form of a plain market cross in Cornish granite. The floriated Latin cross has a tall tapering octagonal shaft which rises from a square base with a lancet decoration between corner buttresses. This sits atop an octagonal plinth with the dedication on the south-west face and the names of the 444 fallen on the other faces. The monument sits on a two-tier octagonal base. The cross is enclosed by a later low stone rubble wall with stone coping probably erected in 1951. The stone paving on which the memorial stands and stone paved approach with two flights of steps to the south-west dates, however, from the memorials inception.

The dedication reads: IN MEMORY/ OF THOSE WHO DIED AND SUFFERED FOR/ THEIR COUNTRY IN THE GREAT WAR EARNING/ PRAISE AND HONOUR THAT CAN NEVER DIE/ OF THOSE, TOO, WHO WERE DONE TO DEATH/ IN THIS TOWN AND A SIGN FOR ALL TIME/ OF THANKFULNESS TO ALMIGHTY GOD/ FOR THE SAFE HOMECOMING OF SO MANY/ OF THEIR FIGHTING MEN/ AND FOR THE DELIVERANCE OF THEIR TOWN FROM/ MANY PERILS FROM THE AIR AND FROM THE SEA/ THIS CROSS/ WAS RAISED BY THE PEOPLE OF MARGATE AD 1922/ DEATH IS SWALLOWED UP IN VICTORY. The names of the fallen are given with initials and surname. On the north-east face are two distinct lists; for ten of those killed in the explosion on 2 April 1916 at the Explosives Loading Company factory at Uplees, near Faversham, the worst disaster ever to occur in the history of the UK explosives killing 109 workers; and 18 killed in enemy air raids on Margate (of whom 13 were local residents, and five servicemen who died whilst staying in the town)

The World War II memorial wall behind the cross consists of four Portland stone panels with the names of the 236 fallen atop the surrounding rubble stone wall. The panels are supported by square posts and flank a higher central tablet with the dedication reading: IN MEMORY/ OF THOSE OF THIS TOWN WHO LOST/ THEIR LIVES DURING THE 1939-1945 WAR/ AND AS AN EXPRESSION OF GRATITUDE FOR/ DELIVERANCE FROM MANY DANGERS FROM THE/ LAND, SEA AND AIR, ALSO TO COMMEMORATE/ THE SAFE LANDING AT MARGATE OF OVER 46,000/ MEMBERS OF THE ARMED FORCES FROM/ DUNKIRK IN 1940 THESE TABLETS WERE/ ERECTED BY THE MAYOR, ALDERMEN AND/ BURGESSES OF THE BOROUGH OF MARGATE/ A.D. 1951. One casualty from the Falklands War, and a soldier who died in Northern Ireland, are also commemorated.

HISTORY:
The original design for the memorial, displayed at Margate Pavilion in March 1920, was for a metal sculpture of a Private soldier by Frederick T Callcott. Callcott in the manner of his Surf Boat memorial on Marine Terrace (Grade II). In the event this design proved too costly. The next design was an elaborate Gothic Eleanor cross, by Robert Dalby Reeve, a local architect, and estimated at £3,500. This design can be seen in a postcard of the time. However, by December 1921 only £1,372 had been raised by public subscription and the design was again modified by Reeve, to the existing market cross, at a reduced cost of £1,730 with the land, just to the south of Holy Trinity church, donated by a local landowner, Cecil Cobb. The memorial, executed by Herbert Read of Exeter, was dedicated on 5 November 1922 by the Bishop of Rochester and unveiled by Lord Harris (1851-1932), head of the Kent war memorial committee. The memorial wall commemorating the fallen of that Second World War was added to the north-east of the World War I cross in 1951.

REASONS FOR DESIGNATION: The World War I and World War II war memorials and surrounding walls, paving and approach, Trinity Square, Margate are designated at Grade II for the following principal reasons:
* Architectural interest: the World War I memorial is a simple, but elegant, example of the oft-used market cross style of memorial;
* Historic interest: as poignant reminders of the tragic impact of world events on this community. The World War I cross has the added interest for the inclusion amongst those commemorated of some of the victims of the 1916 Faversham explosives disaster and civilian casualties of air raids.