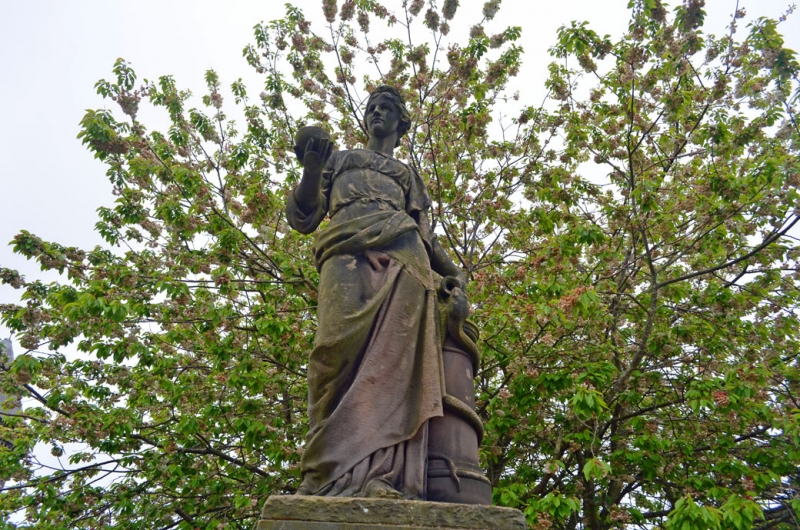 DESCRIPTION: this memorial is set within a paved area on the outer edge of Berwick's Elizabethan ramparts. It is constructed of sandstone (the plinth of Doddington stone) and comprises a graduated stepped base supporting a square plinth upon which stands a 2.5m high statue of the Greek goddess of health, Hygieia, characteristically holding a saucer in her right hand with water for a serpent, which is wound around a column at her side. On the right side at the base is the signature D.W.S. STEVENSON RSA/Sc. The square plinth bears a bronze tablet with a relief portrait of Maclagan in profile facing right; below this is the inscription: PHILIP WHITESIDE MACLAGAN/M.D./BORN 9TH OCTOBER 1818/DIED 25TH MAY 1892/IN AFFECTIONATE & GRATEFUL REMEMBRANCE/OF A NOBLE LIFE SPENT UNGRUDGINGLY/IN PROMOTING THE HIGHEST INTERESTS/OF HUMANITY/"THE BELOVED PHYSICIAN"

HISTORY: Dr Phillip Whiteside Maclagan (1818-1892), was born and educated in Edinburgh, after which he became an army surgeon with the Royal Canadian Regiment. He married the daughter of Dr George Johnson of Berwick in 1847 and joined Johnson's practice in 1853, which he inherited on Johnson's death. In August 1892, three months after his death, it was decided to erect a memorial, funded by public subscription, to the memory of the respected local physician. It was originally intended to erect a simple and modest memorial but £758 was raised and instead the Edinburgh sculptor D. W Stevenson was commissioned and it was agreed that he should incorporate into his design a statue of Hygieia, the Greek goddess of good health. The memorial was erected at Marygate where it stood, until to ease traffic congestion, it was moved to a site outside the infirmary in 1922. It was moved by a few metres in 1993, again to ease traffic congestion.

The sculptor D. W Stevenson (1842-1904) was born near Edinburgh and trained in the city under William Brodie. The winner of a number of national prizes in his early years, he went on to complete his studies in Rome. He was elected an associate of the Royal Scottish Academy in 1877 and developed a highly regarded reputation. He completed several important commissions of a monumental style, many of which are listed and in the field of architectural sculpture he contributed figures to the façade of the Grade A listed Scottish National Portrait Gallery. In 1888 he had sculpted a similar figure of Hygieia as a replacement for that within St Bernard's Well, Edinburgh, also listed Category A. His later work reflected British and French contemporary developments in which realism, individuality and a highly plastic style are combined and he excelled in naturalistic modelling.

REASONS FOR DESIGNATION
This 1892 memorial statue to Dr Philip Whiteside Maclagan is designated at Grade II for the following principal reasons:

* Historic: the sculptor of this statue, D W Stevenson, was a talented and well respected figure of national renown

* Architectural: it is a well-executed commemorative statue of considerable intrinsic sculptural quality

The classical statue erected in 1892 in memory of Dr Philip Whiteside Maclagan is designated at Grade II for the following principal reasons:

* Historic: the sculptor D W Stevenson was a talented and well respected figure of national renown

* Architectural: it is a well-executed commemorative statue of considerable intrinsic sculptural quality