Railings along pavement to the front of 30-34 Peckham Road 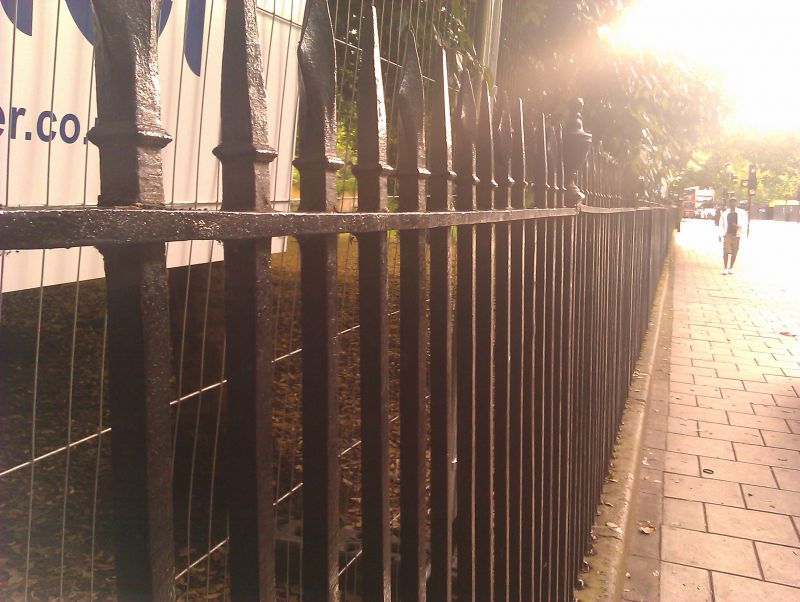 Entry Name: Railings along pavement to the front of 30-34 Peckham Road

Peckham
PECKHAM ROAD
Railings along pavement to the front of Nos. 30-34
03-SEP-10

DESCRIPTION: The railings are cast-iron and set in a low stone plinth with some areas of concrete infill. They consist of square bars with alternating diamond shaped and blunt spike shaped heads. The standards have urn finials and dog-leg braces. At the centre of the run is a pair of large cast-iron arches, roughly reaching the height of the top rail, with decorative scrolled finials above. This appears to be the remains of gates to a former entrance, now modified to form part of the run.

At the eastern and western ends are two entrances, each with cast-iron gates of a later date with matching finials. Both are flanked by rusticated stone gate piers with stone caps, and cast-iron lamps set on decorative bases above.

HISTORY: The railings run along Peckham Road, between the pavement edge and the forecourt of Nos. 30, 32 and 34 Peckham Road. Nos. 30, 32 and 34 Peckham Road, later known as Camberwell House, were originally built as three substantial houses in 1790. Nos. 30 and 32 was occupied as a school under the direction of one Mr Wanostrocht and originally named Alfred House. It was later sold to the Royal Navy and became the first Royal Naval School. Funded purely by voluntary contribution, the Navy School's purpose was to educate 'the sons of those naval and marine officers whose scanty incomes did not allow them to provide a first-rate education for their boys' (from "Camberwell" in Edward Walford's Old and New London, 1878).
When the Royal Naval School relocated in 1846, Alfred House was re-named Camberwell House and converted to a private mental asylum by one John Hayball Paul. It closed in 1955, from which time the building was occupied by Southwark Borough Council and used as offices.