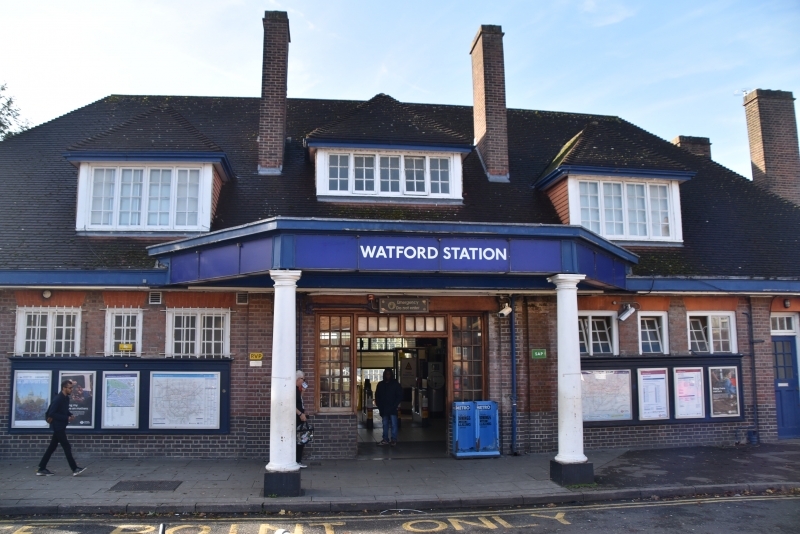 Church of England Parish: Watford St Michael and All Angels

PLAN: The building, on an embankment above track level, has central booking hall flanked by shops, railway offices and toilets. Domestic accommodation in first-floor flat above. Stairs to rear lead down to canopied island platform with waiting rooms and toilets.

EXTERIOR: A rectangular one-and-a-half-storey structure in an Arts and Crafts-influenced vernacular manner. Dominant hipped roof with tall brick stacks and three hipped dormers. Polygonal metal canopy on twin Doric columns projects in front of main entrance, which has part-glazed double doors with overlight and flanking windows. Small windows on either side with large panelled notice boards beneath. Shops in outer bays, that to right retaining its original shop-front. Rear elevation, overlooking the platform, is taller and has large sash windows and three dormers similar to those in front.

HISTORY: The Metropolitan Railway was the world's first underground line, opened in 1863 to ease surface traffic congestion and provide a passenger link between London's main northern railway termini at Paddington, Euston and Kings Cross. From the late 1860s the Metropolitan began to expand gradually through the northern suburbs and into the countryside beyond, where the company reaped large profits from the development of commuter housing. Harrow was reached in 1880 and Rickmansworth in 1885, with the line eventually extending as far as Aylesbury.

A number of branch lines diverged from the trunk route. One of the most ambitious of these, first planned in 1912 but not opened until 1925, ran from Moor Park via a series of cuttings and bridges to the major town of Watford, A suburban terminus was built by the Metropolitan's in-house architect CW Clark; the Borough Council's refusal to allow track to be laid across municipally-owned Cassiobury Park meant that the initial plan to bring trains through to the High Street had to be abandoned. The line was initially operated as a joint venture between the Metropolitan and the London and North Eastern Railway, with the former running electrified stock into Baker Street, and the latter operating steam-hauled services via the Great Central line to the Midlands and North. The LNER withdrew from the partnership within a year, however, and the line never justified the immense cost of its construction. A goods yard to the south of the site eventually closed in 1960; the station itself has seen comparatively little alteration, save for the installation of Unified Ticketing System (UTS) barriers, ticket machines and sales windows during the 1980s.

Charles Walter Clark (1885-1972) designed around 25 new and rebuilt stations for the Metropolitan Railway between 1910 and 1933, part of the renewal programme that accompanied the railway's electrification. Around five of these are already listed at Grade II. He employed a grandiose Classical style for the company's central London properties, listed examples of which including the Baker Street head offices (1913) and stations such as Praed Street/Paddington (1914) and Farringdon (1922). For out-of-town stations he developed a brick-built domestic revival manner, intended to evoke the local rural vernacular and set the tone for ensuing suburban development: as well as Watford and its neighbour and contemporary Croxley, this is seen at Stanmore and Kingsbury (both 1932) on what is now the Jubilee Line.

REASONS FOR DESIGNATION: Watford Station, Watford, is listed at Grade II for the following principal reasons:
* Architectural Interest: the most complete surviving example of this distinctive group of suburban Metropolitan Line stations, with Clark's homely, vernacular design and features such as original tiling.
* Historic Interest: the design epitomises the aesthetics of 'Metroland', an inter-war movement to the rural suburbs, named by John Betjeman, that captured large parts of the nation's architectural imagination.

Watford Station, built in 1925 to designs by the Metropolitan Railway architect Charles Walter Clark, is designated at Grade II for the following principal reasons:
* Architectural Interest: the most complete surviving example of this distinctive group of suburban Metropolitan Line stations, with Clark's homely, vernacular design and features such as original tiling.
* Historic Interest: the design epitomises the aesthetics of 'Metroland', an inter-war movement to the rural suburbs, named by John Betjeman, that captured large parts of the nation's architectural imagination.