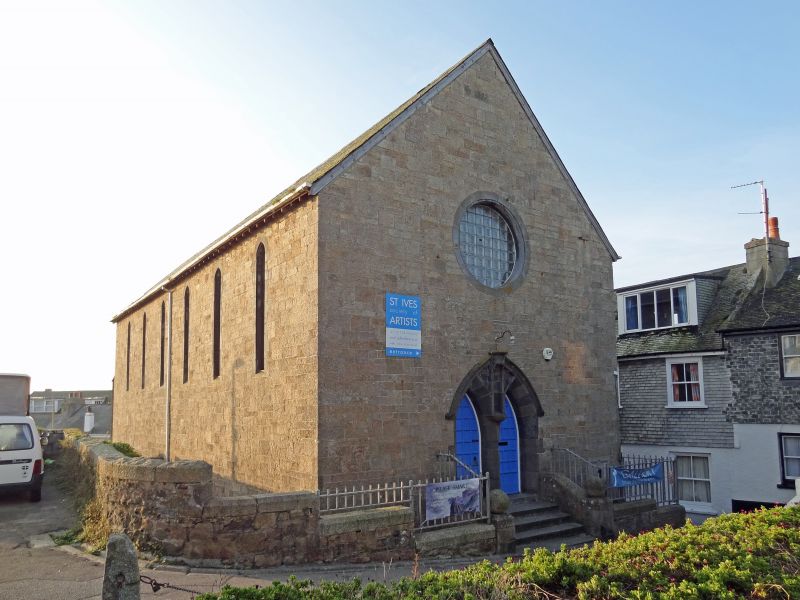 GV II
A former church, now the gallery of the St Ives Society of Artists, built in 1903-5 in Gothic style to a design by Edmund Harold Sedding (1863-1921) by Robert Toy of St Ives.

MATERIALS: Constructed from red granite, dressed and brought to course, with dressings of Polyphant greenstone, under a Delabole slate roof.

PLAN: The building is orientated north-west to south-east, with the ritual east end at the south-east end; ritual compass points are used in this description. It has a simple plan of nave and slightly narrower chancel, with a polygonal apse to the east end.

EXTERIOR: The building, a high single storey to the west, is set on steeply sloping ground, with a basement fully expressed at the east end. The main entrance is in the west end, approached by a short flight of granite steps with solid balustrades to either side, terminating in ball finials; the small forecourt is bounded by a stepped boundary wall, within which a set of granite steps leads down to the basement. The west end of the building is gabled, and has a large circular window above paired chamfered, pointed-arched doorways set in a pointed-arched surround with drip-mould, Y-tracery and a statue niche with octagonal base, moulded canopy and traceried back. The doors throughout are pointed-arched, multiple-panelled examples. To either side of the nave, six tall lancets with trefoil heads light the building; they house timber replacement windows; to the basement, there are rebated window surrounds, those to the north side blocked, those remaining fitted with glass blocks. There is an entrance doorway giving access to the basement from the shallow courtyard surrounding the building; the door is set in a pointed-arched, moulded surround. The south side has a row of six statue niches similar to those on the west doorway, set below the lancet windows and aligned with them. The polygonal chancel has buttresses with two offsets rising full-height from the foot of the basement to the eaves. The lancets retain their original leaded windows. A truncated bell-turret is set in the return between the nave and chancel on the south side, terminating in a flat roof; the belfry is articulated by a trefoil-headed lancet with louvres and drip-mould.

INTERIOR: Internally, the high main body of the church has a wagon roof with moulded ribs and purlins articulating the bay structure, and plain plaster panels between. The walls are plastered and painted white. A pointed chancel arch separates the nave from the slightly narrower chancel, which terminates in a polygonal apse; the roof, which is continuous with that of the nave, has radiating ribs articulating the ceiling. The nave windows are set within recessed arched panels. The nave floor is set with parquet blocks in blond wood; the chancel floor is set slightly higher, and is reached by a flight of steps between moulded stone balustrades. The basement, formerly the crypt, is divided into two rooms, the larger beneath the nave, and a smaller one beneath the former chancel. The main structural bays are expressed by rolled-steel joists which support the concrete floor above. A narrow winder staircase rises within the bell-turret, giving access to the floor above. The walls are plastered apart from the south wall, which has exposed pointed rubble stonework. The floors are of parquet.

SUBSIDIARY FEATURES: The church is bounded to the west end by a stepped granite wall, following the fall of the ground from north to south. The late C20 railings which top the wall are not of special interest.

HISTORY: The town of St Ives was almost wholly concerned with fishing during the C19, and the former mariners' church was constructed in 1903-5 in memory of Canon John Balmer-Jones, to provide an Anglican place of worship as an alternative to the strong Non-conformist congregations in the town. The mariners' church was designed by Edmund Harold Sedding (1863-1921). Edmund was the nephew of the well-regarded Victorian architect, and harbinger of Art of Nouveau, John Dando Sedding (1838-1891) whose practice he inherited. Like his father, the architect Edmund Sedding (1836-1868) he was something of an antiquarian and in 1909 published `Norman architecture in Cornwall: a handbook to old Cornish ecclesiastical architecture'. The church he designed for St Ives was quite small but very lofty, in a restrained Early English Gothic Revival style, and would rise above the tangle of cottages and fishing buildings below; it is visible from all strategic points in the town. The church, simply comprising nave and chancel in a polygonal apse to the east end, was to have a bell tower with a relatively elaborate crocketed spirelet, and had a number of canopied niches for statues to the exterior. The building was not completed as planned: the spirelet was never added, and the niches remained empty, but the church was opened and dedicated to St Nicholas, the patron saint of fishermen, in 1905. Though the church had been built to accommodate a congregation of 270, the opening was attended by only 100 souls, and this was an indication of the lack of interest which would follow the church. By 1929 it appears to have fallen into disuse and disrepair.

As the pilchard fishing industry in St Ives declined, tourism began to take over, and the town became popular with visitors. Artists began to frequent the town, attracted by the special qualities of the light, and the redundant buildings associated with the fishing industry were gradually taken over as artists' studios. In 1887, the first art gallery was opened by James Lanham, and in the following year, the first school of painting was set up by Julius Olsson and Louis Grier. Olsson rented a studio in the buildings in Back Road West which were later to become the Porthmeor Studios, a complex of artists' studios above working pilchard cellars (listed Grade II*). The St Ives Society of Artists was formed in 1927, with the intention of raising the standard of work in the colony, and to exhibit work which was significant in the artistic world. The Society was initially housed in Lanham's gallery, but by 1928 had taken over Julius Olsson's old studio in Back Road West, later expanding to take over an adjacent studio. The years prior to the Second World War saw a large number of notable artists join the Society, including Royal Academicians Dame Laura Knight, Sir Stanley Spencer, Sir Alfred Munnings, Sir Frank Brangwyn, Stanhope Forbes and Samuel John 'Lamorna' Birch. In 1938 Borlase Smart and Leonard Fuller set up the St Ives School of Painting in the studio complex in Back Road West. The school was an immediate success, attracting students from all parts of the United Kingdom, and abroad. In 1939, the painter Ben Nicholson moved to St Ives with his wife, the sculptor Barbara Hepworth. They were to form the nucleus of a modern art movement based in St Ives, which would achieve an international reputation within only a few years. Leonard Fuller and Borlase Smart were sympathetic to new ideas and welcomed newcomers to the colony; they invited Nicholson and Hepworth and, later, other younger artists to join the St Ives Society of Artists.

By the later 1930s, it was evident that the Society would require more space as it continued to grow; the idea of taking on the former mariners' church was first mooted but with the outbreak of war, the idea was shelved. Smeaton's Pier in St Ives was used in World War II as an embarkation point for allied troops leaving for Europe, and the church was requisitioned for use as an army field hospital in 1944. Despite this hiatus, the St Ives Society of Artists succeeded in taking over the mariners' church, which opened as the New Gallery in 1945. Borlase Smart, having increased the reputation and profile of the Society through its innovative travelling exhibitions, invited new, modern artists to join, and although these were auspicious times for the fame of the Society, there were some tensions between the more avant-garde artists and some of the more traditional painters. Their work was sidelined, and exhibited in the isolated part of the church which had been the chancel. In consequence, a group of the new artists including Peter Lanyon and Bryan Wynter decided to show their work in the crypt of the church. The following year, 1947, seventeen artists of the newly-formed 'Crypt Group' exhibited in the basement of the church, including Barbara Hepworth and Wilhelmina Barns-Graham. Their final exhibition was held in the crypt in 1948, and there followed a complete schism in the Society, over who should be included in future shows; it resulted in the resignation of a number of members, including the whole of the Crypt Group. The Crypt Group exhibitions, though short-lived, had given a first opportunity to exhibit to some of the leading modern artists of the period, whose work would become recognised internationally. The former Mariners' church remains the gallery of the St Ives Society of Artists, and the gallery and Society retain strong links with the St Ives School of Painting still based in Back Road West, which has held exhibitions in the gallery; it also shows work by the artists working in the Porthmeor Studios.

REASONS FOR DESIGNATION: The St Ives Society of Artists' Gallery, formerly the Mariners' Church in Norway Square, is designated at Grade II for the following principal reasons:
* Historic interest: the building has been, since 1945, the gallery of the St Ives Society of Artists, and has exhibited the work of internationally-significant artists based in the St Ives artists' colony since that time
* Historic association: the gallery showed work by members of the Society, including the Crypt Group, a group of modern artists including Barbara Hepworth, Bryan Wynter and Peter Lanyon, and gave many such significant figures their first opportunity to exhibit in public
* Group value: with the Porthmeor Studios and St Ives School of Painting (listed Grade II*), with which the gallery has strong cultural and historic associations, and the listed fishermen's cottages and related buildings in Norway Lane and Back Road West, for whose occupants the church had originally been built
* Architectural interest: the building was constructed in 1903-5 to a design by E H Sedding, as a place of worship for the fishing community of St Ives, in a robust Gothic style with some good detailing

The St Ives Society of Artists' Gallery, formerly the Mariners' Church in Norway Square, is designated at Grade II, for the following principal reasons:
* Historic interest: the building has been, since 1945, the gallery of the St Ives Society of Artists, and has exhibited the work of internationally-significant artists based in the St Ives artists' colony since that time
* Historic association: the gallery showed work by members of the Society, including the Crypt Group, a group of modern artists including Barbara Hepworth, Bryan Wynter and Peter Lanyon, and gave many such significant figures their first opportunity to exhibit in public
* Group value: with the Porthmeor Studios and St Ives School of Painting (listed Grade II*), with which the gallery has strong cultural and historic associations, and the listed fishermen's cottages and related buildings in Norway Lane and Back Road West, for whose occupants the church had originally been built
* Architectural interest: the building was constructed in 1903-5 to a design by E H Sedding, as a place of worship for the fishing community of St Ives, in a robust Gothic style with some good detailing