A Grade II Listed Building in Teddington, Richmond upon Thames 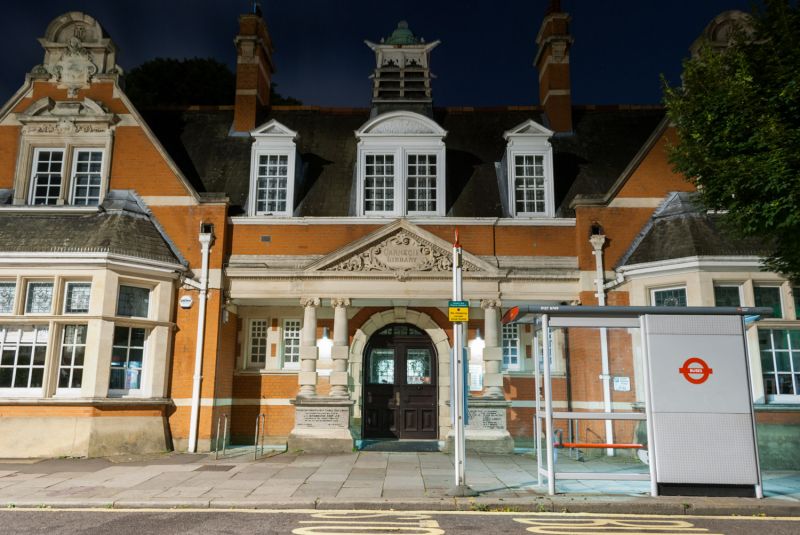 MATERIALS: the façade is built of red brick with Portland stone and gauged brick dressings, the flanks and rear are of stock brick; roofs are of slate.

PLAN: The library has a one and a half storey frontage with a symmetrical façade, the bays arranged 1:3:1. The entrance lobby opens onto the main library, through an Ionic screen. The library is single storey and top-lit. An open, three-bay screen leads to the former newspaper library, set at right angles to the street, which is both top-lit and lit by paired sashes in the south wall. French windows lead to the garden to the rear. This room formerly connected to the reference library overlooking the street. To the left of the main library, a round-arched opening gives onto a rectangular room beneath a glazed dome. This room opens onto a front room similar to the reference room opposite it. Flanking the entrance are WCs. Attached to the left is the librarian's accommodation.

EXTERIOR: the library has a symmetrical façade comprising a pedimented entrance, flanked by forward bays. The entrance is set behind a screen of paired Ionic columns with pronounced rectangular blocks, and cherubic heads carved in the capitals. The bases of the pairs of piers have inscribed granite foundation stones. The pediment is enriched with a cartouche inscribed Carnegie Library. Above the entrance, the central bay has full dormer sash windows. The central window has a segmental pediment, the smaller flanking sashes have triangular pediments. Dominating the roofline is a bell turret or fleche with a splayed copper dome, flanked by tall brick stacks. Each flanking bay is of one and a half storeys beneath an enriched shaped gable, that to the right dated 1906. Each has a canted ground-floor window bay and a broken (ie open at the apex), segmental-pedimented first floor window. The transoms of the ground floor windows stand forward from the sashes. Upper floor windows are small-paned sashes with heavy glazing bars. Some upper lights on the ground floor windows have leaded panes with armorial glass. The round-arched entrance, has a moulded stone architrave with pronounced quoins, within a gauged brick arch. Heavy panelled doors lead to a lobby lined in green glazed tiles and with a terrazzo floor with a central crest. The inner doors are of lighter panelling and have glazed upper panes with moulded aprons. Doors have original door furniture. Attached to the left is the librarian's flat, which has a first floor canted oriel window.

INTERIOR: the three-bay Ionic screen of polished stone columns on tall bases opens onto the main library which is top-lit, with a richly decorated ceiling and panelled dado. Deep curved ceiling ribs are supported on brackets, each carved with a badge, most inscribed with the name of an author. Clockwise from the left of the entrance these are: Lytton, Plato, Longfellow, Homer, Bede, Milton, Dickens and Byron. The ceiling is of flat, glazed panels enriched with green coloured glass, beneath a pitched glazed roof. An open, three-bay screen of square-based battered piers separates this room from the former newspaper library, arranged in five bays, 1:3:1. It is also top-lit, beneath a segmental, glazed roof and is similarly decorated to the main library, with a moulded, coved, frieze and cartouches inscribed with authors' names. Clockwise from the left of the entrance these are: Chaucer, Gray, Scott, Pope, Bunyan, Burns, Bacon and Shakespeare. The external south wall has paired sashes, while a glazed bay window, with upper leaded lights enriched with swags of green coloured glass, overlooks the garden. To the left of the main library, a round-arched opening gives onto a rectangular room beneath a glazed dome. The drum has enriched panels and the roof has leaded glazing, with coloured glass panels. The room opens onto a front room which, like the opposite reference room, has a lighter moulded ceiling and dado; windows have moulded shafts and leaded panes to the upper lights. The tiled WC to the right of the entrance has a Doulton wash basin and cistern.

The internal layout of the library has been altered and shelving has been replaced. A bronze memorial wall plaque to author RD Blackmore (1825-1900), who lived in Teddington, commemorates the centenary of his birth. Other fittings include a regulator clock, and a detached bronze bust of Noel Coward, who was born nearby, by Avril Vellacot.

HISTORY: Teddington Memorial Library opened in 1906 to serve the expanding suburb. 'Free libraries' were built in large numbers in the later C19, and the turn of the century, often as part of a municipal group and often in Baroque manner. In reality libraries were expensive to build and stock and benefactors such as Andrew Carnegie (1835-1919), a Scottish born iron and steel magnate, were pivotal to their success. Continuing the philanthropic library building scheme which Henry Tate had initiated, many suburban libraries were built with Carnegie funding, Twickenham library, for example, in the following year.

In 1890 most libraries would have had an entrance hall, a large reading room for newspapers, another large room for the reference library and a smaller space for the lending library which had to be linked to the book store. A scheme emerged in which a two or three storey frontage might contain a ladies' library, magazine room or children's library, with larger and often top-lit rooms behind, housing the news room, reference section and bookstore. A copy of a plan of the interior of Teddington Library, dated 1906 describes a comparable, and early, if not original, layout, with a central adult library, newspaper room to the right, and flanking the entrance, a magazine room and reference library. The library is of particular note for the inscribed plaster cartouches, which decorate the two main reading rooms, which encouraged the diligent reader and are an insight into Edwardian literary tastes. The adjoining librarian's flat is typical of libraries built from c1900.

Early photographs show the library behind a parapet wall and railings which have since been removed.

HA Cheers (1853-1914), who lived in Twickenham from 1884, was an accomplished architect who specialised in public building. East Ham Town Hall, designed with Joseph Smith, has been described as 'the supreme example of the power and confidence of the Edwardian local authority'. His work included the Guildhall, Oswestry (1893) and the Library, Kingston upon Hull (1894), both Grade II, Newnham Council Offices (East Ham Town Hall), 1901-3, (Grade II*) and East Ham Technical College of 1903-4 (Grade II).

REASONS FOR DESIGNATION:
Teddington Carnegie Library, 1906, by HA Cheers (1853-1914) is designated at Grade II for the following principal reasons:
* Architectural interest: this handsome Edwardian Baroque façade, in good quality materials, is an example of the civic pride associated with public libraries
* Internal decoration: a comparably rich interior has a series of cartouches inscribed with the names of authors which give an insight into Edwardian literary tastes
* Historic interest: A Carnegie library, funded by philanthropic industrialist Sir Andrew Carnegie (1835-1919), to serve the expanding suburb