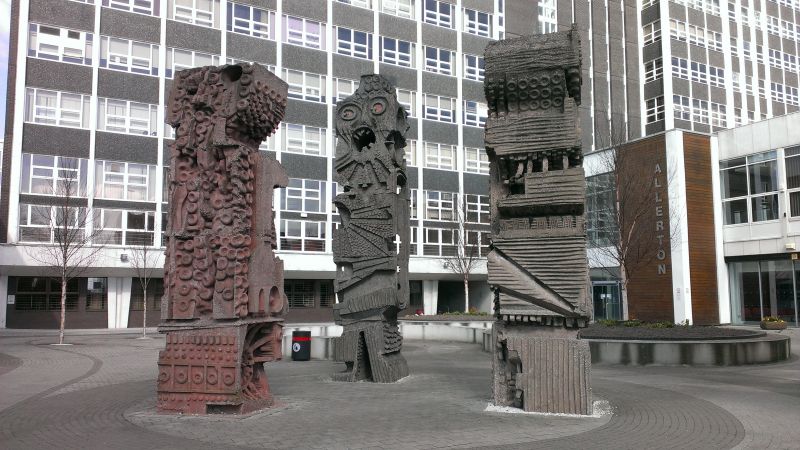 Three concrete totem sculptures. 1966 by William Mitchell for the forecourt of the contemporary Allerton Building, by Halliday Meecham for Salford Technical College now University of Salford.

PLAN: Positioned in a triangular group facing each other and arranged 'so that the morning and evening sunshine will fall on the faces of the figures'.

DESCRIPTION: three tall, stylised totemic figures. Approximately square columns of 5.6-6 metres in height each formed from four blocks stuck together. Each figure has an individual design and is a distinctive colour, described at the time of construction as sandy white, flaky black and pale terracotta. The four faces of the columns are differently detailed, some with organic forms recognisable as human features such as faces, eyes, and arms. Also textured and high relief patterns of swirls, squares, and shells, with applied mosaic detailing of small coloured tiles, reinforcing the Mayan influence.

Mapping Note: The associated mapping marks the location of the sculptures with triangles; it is not intended to define an area on the ground.

The Allerton Building opened in 1966 and originally formed part of Salford Technical College. It was designed by Manchester-based architects' practice Halliday Meecham who commissioned the London sculptor William Mitchell to produce a piece of landscape art to add interest in the forecourt of the building.

William Mitchell (b.1925) was a leading public artist of the time who had studied art at the Southern College of Art, Portsmouth, and at the Royal College of Art. He established the William Mitchell Design Consultants Group and produced sculptures, relief murals and mosaics using a wide variety of materials, often using concrete. From 1953-65 he had been employed as an artist by London County Council, along with Antony Holloway (1928-2000). Mainly due to his specialisation in the casting of concrete relief sculpture, he worked with many architects, including Sir Basil Spence and Sir Frederick Gibberd. A number of Mitchell's commissions have been listed, including a series of relief heads at Harlow Civic Centre Water Gardens (now moved), a free-standing sculpture 'Corn King and Spring Queen' in Wexham, South Buckinghamshire, a mural at the Three Tuns Public House, Bull Yard, Coventry, and a mural at the City of London Academy, Packington Street, Islington. There are also works by him included as part of the special interest of listed buildings, such as the CIS tower, Manchester, Liverpool's Roman Catholic Cathedral, the Roman Catholic Cathedral, Clifton, Bristol, the Egyptian escalator at Harrods, Knightsbridge, and the auditorium of the Curzon Cinema in Mayfair.

Mitchell designed a composition of three concrete figures with features suggestive of Mayan or Aztec culture. Each figure was constructed from four concrete blocks and was made on site using polyurethane moulds. The piece was untitled, though many names have since been suggested including Faith, Hope and Charity. The original flags on which they stood have more recently been replaced with grey pavoirs.

The three concrete totem sculptures of 1966 by William Mitchell, which stand in the courtyard of the Allerton Building, University of Salford, are recommended for designation at Grade II for the following principal reasons:
* Historic Interest: as a good representative example of the commissioning of public artwork as an integral element of the design of new higher education colleges and universities in the post-war period, here succeeding in imbuing a distinct identity and image on an otherwise relatively plain complex.
* Artist: William Mitchell was a leading public artist in the post-war period who designed many pieces of art in the public realm, working to a high artistic quality in various materials but most notably concrete, a material in which he was highly skilled, using innovative and unusual casting techniques, as seen in this sculptural group. He has a number of listed pieces to his name, both individual designs and components of larger architectural commissions by leading architects of the day
* Environment: the sculptural group provides a strong aesthetic and humane presence within the rather restrained academic complex; it has a democracy of approach and forward-looking nature which, typically for artwork of this period, does not address any issues particular to the environment in which it stands, rather leaving the observer to apply their own interpretation
* Aesthetic quality: the three stylised totemic sculptures are a bold composition and a good example of William Mitchell's distinctive tactile concrete sculpture of the mid 1960s which drew upon Central American art, sometimes referred to as his 'Aztec' style, with strong primitive forms, use of textured and high relief patterns, and mosaic details
* Intactness: though the courtyard has been repaved, the group is unaltered, standing as intended. Great care was taken in their positioning, both to illuminate and animate their stylised faces through the direct fall of morning and evening light, and to encourage the proximity of, and thus interaction with, students passing close by to exit the complex into the wider neighbourhood