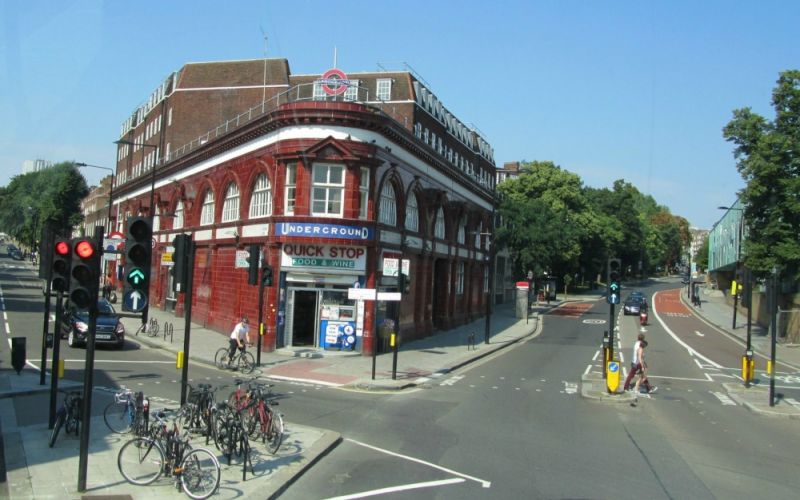 EXTERIOR: The station occupies a prominent site at the convergence of Adelaide Road and Haverstock Hill, and has two elevations meeting at an acute angle with a curved apex. 2 storeys high. It originally had an opposing entrance and exit on both elevations; those on N side now blocked. S elevation in Adelaide Road is the longest of all the Green stations and consists of 8 pilastered bays arranged 3-1-1-3 with alternating half-bays, the triple bays forming a continuous arcade, terminating in a half-bay at the W. Entrance is in the penultimate bay to the W, while the former exit further E is now a shop. The curved apex is accentuated by an overhanging upper floor with a pedimented tripartite window. The ground floor was always a shop, originally an Express Dairy, which also occupied the 3 adjacent bays on both sides of the angle; the shop front is modern. The shorter N elevation has similar treatment with 6 main bays arranged 2-1-1-2 of which the eastern single bay was an entrance. Both elevations retain original windows to some bays, while others have been been infilled with faience. Upper storey has timber Diocletian windows in keyed semi-circular arches with egg-and-dart decoration and cartouches between the springers of the arcaded bays, and a modillion cornice. Each half-bay has a deeply hooded oeil-de-boeuf.

Above the entrance, the former exit on the N side, and the shop front at the apex, are blue tile signs with white relief lettering reading UNDERGROUND, added in 1908. Frieze lettering has otherwise been removed. To the right of the entrance is a 1930s pole and roundel Underground sign.

INTERIOR: Ticket hall retains a number of features including moulded cornices, an early brass clock, six-panelled door with paterae, fluted timber wall banding and railings enclosing the top of the stair. Tiling has been replicated to the 1906 pattern. Some original mauve terrazzo flooring survives in the disused exit area to the rear of the lifts. Original tiling in dark red and cream survives in the spiral staircase and lower corridors; that to the platforms replicated in 2005, apart from the soffit banding and some remnants of directional signs.

The CCE&HR was one of three tube lines opened 1906-7 by the UERL. The world's first deep-level tube line, the City & South London Railway (C&SLR), had opened in 1890 from the City to Stockwell, and although a flurry of proposals for further routes ensued, progress was hampered by lack of capital until the Central London Railway Line (later the Central Line) opened in 1900. In 1901-2 the American transport entrepreneur, Charles Tyson Yerkes, acquired four dormant companies: the CCE&HR the Brompton & Piccadilly Circus Railway and the Great Northern & Strand Railway (GN&SR), which were merged as the GNP&BR, and the Baker Street & Waterloo Railway; the three were incorporated into the UERL. Yerkes died in 1905 before the tube lines were completed. The CCE&HR, or 'Hampstead Railway' or 'Tube', opened on 22 June 1907, running from Charing Cross to Camden Town where it diverged, terminating at Highgate (now Archway) in the north, and Golders Green in the north west, with 13 intermediate stations. In 1910 the three UERL tubes were formally merged as the London Electric Railway (LER). In 1924-6, the former CCE&HR and C&SLR lines were joined, becoming the Northern Line in 1937.

Leslie Green (1875-1908) was appointed Architect to the UERL in 1903 and designed 40 stations for the company in a distinctive Edwardian Baroque house style clad in ox-blood faience. They followed a standardised design and plan adapted to the site. Interiors comprised a ground-floor ticket hall with lifts, a spiral stair down to lower corridors, and further stairs down to the platforms which were usually parallel. The upper storey housed lift machinery and office space. Ticket halls featured deep-green tiling with a stylised acanthus leaf or pomegranate frieze, and ticket windows in aedicular surrounds; few of these features now survive. Stairs, corridors and platforms were faced in glazed tiles with directional signage, produced by various tile manufacturers, each station with its unique colour scheme. Green suffered ill health and his contract with UERL terminated at the end of 1907. He died the following year at the age of 33.

* Architectural interest: a good example of a station designed by Leslie Green to serve the CC&HR, later the Northern Line; situated at the acute angle of the road junction, it is externally the most impressive and distinctive of the surviving Green stations, and retains three early tiled Underground signs, now rare
* Interior: while altered, features of interest survive including tiling at lower levels
* Historic interest: the Yerkes group of stations designed by Leslie Green illustrate a remarkable phase in the development of the capital's transport system, with the pioneering use of a strong and consistent corporate image; the characteristic ox-blood faience façades are instantly recognisable and count among the most iconic of London building types