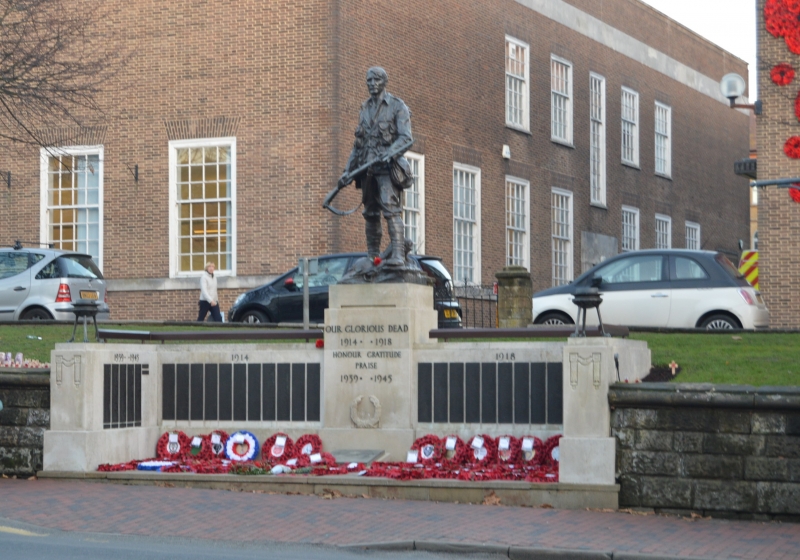 Set within a low retaining wall facing out towards Mount Pleasant, and in front of Tunbridge Wells' civic complex, which includes the town hall and the public library and museum, the memorial takes the form of a smooth-faced stone wall, set back approximately 1.5 metres from the pavement edge, with returning wings. To the centre of the wall is a raised plinth on which stands a bronze figure of a soldier, fully equipped for combat, his rifle with bayonet lowered and held in both hands across his body. The soldier's helmet is at his feet. The following inscription is spelt-out in bronze letters on the plinth: OUR GORIOUS DEAD / 1914 - 1918 / HONOUR GRATITUDE / PRAISE / 1939 - 1945. A laurel wreath is carved in relief below.

The wall is lined with bronze plaques bearing the Roll of Honour. On each of the flanking wings is a bronze lamp with a laurel garland carved beneath.

The war memorial was unveiled by Colonel Viscount Hardinge and the Guard of Honour was provided by the 4th Battalion, The Queen's Own Royal West Kent Regiment. From the roof of a house in Calverley Parade, buglers sounded the Last Post and Reveille.

The monument stands in front of Tunbridge Wells' listed civic complex, which was built in 1939. The site of the complex was previously occupied by Calverley Parade and Calverley Terrace, part of the Calverley Estate designed by the architect Decimus Burton in the early C19. The retaining wall into which the memorial is set is a remnant of this earlier scheme, and contributes to its strong setting.

* Historic interest: as a permanent testament to the sacrifice made by this community in the First and Second World Wars, it is of strong historic and cultural significance both at a local and a national level.
* Artistic interest: the bronze sculpture by Stanley Nicholson Babb is a powerful and expressive piece of work.
* Group value: although the memorial pre-dates the civic complex, these listed buildings provide a handsome and fitting setting for the memorial.