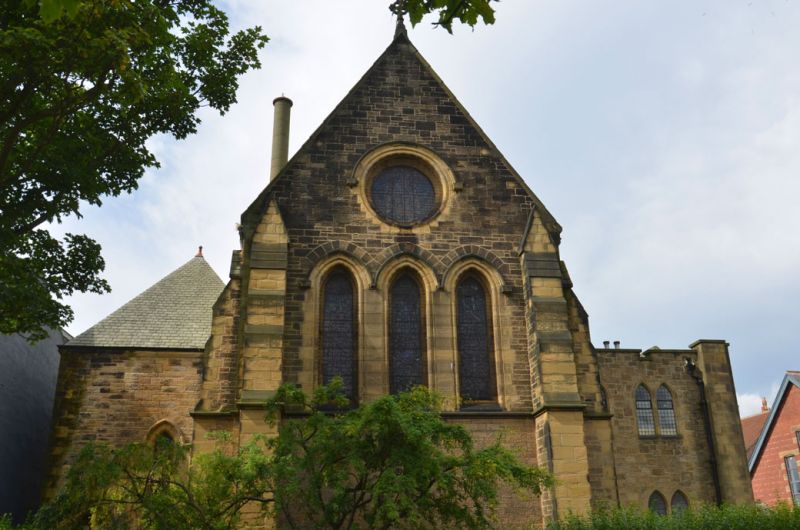 MATERIALS: the church is of squared coursed sandstone with ashlar dressings, the later vestry is of uncoursed square sandstone with ashlar corner piers. It has Westmorland slate roof coverings with red terracotta ridge tile and cast iron rainwater goods (some replaced with UPVC pipes). The windows have stained or leaded glass.

PLAN: rectangular nave with aisles and chancel; the latter has a large organ chamber attached to its south side and a vestry to its north side.

EXTERIOR: the church is designed in Early English style.

North Elevation: chancel with paired lancets and an attached two-storey, three-bay vestry with a flat roof, slightly projecting corner piers and a castellated parapet with a central, open bellcote. There is a pointed arched ground floor entrance to the right bay with paired lancets above; the left bay has paired lancets to each floor and the central bay has a single lancet to the ground floor. The five-bay nave has a clerestory of large roundels with cinquefoil tracery set within short pointed arched recesses with continuous hoodmoulds. The windows alternate with short buttresses. The aisle is pierced by four round-headed windows with continuous hoodmoulds and a sill stringcourse, alternating with short buttresses. A buttressed, pointed arched gabled entrance at the west end has moulded and columned reveals and double wooden doors with a blind vesica over.

East Elevation: similarly steeply pitched and detailed with a large oculus and triple lancet windows below. The apex is surmounted by a stone Celtic cross. The attached full height organ chamber has a pyramidal roof and a lancet with continuous hoodmould.

South Elevation: this is partly obscured but similarly styled to the north elevation

INTERIOR: the chancel has exposed red brick walls above vertical oak panelling with marble flooring and steps to the dais and intricately carved wooden alter. The stained glass of the east window, depicting various Saints, The Risen Christ and The Virgin Mary, forms a memorial to the Fallen of the First World War. It is influenced by the Baroque of Italy and Spain while incorporating contemporary fashions seen in its striking colour scheme and bold patterns. Beyond the ornate metal alter rail there are choir pews to either side in carved oak. To the right is the full height pointed arched organ chamber and organ with carved screen and decorative pipes. The ornate metal chancel screen is set on a stone base as is the richly carved oak pulpit situated immediately left of the chancel arch. Behind the pulpit there is a brass plaque recording the building of the church and on the south side of the chancel are brass war memorials listing the names of the Fallen. Set into the east wall of the south aisle is a small Lady Chapel with an oak reredos. A clergy vestry and entrance lobby with choir vestry above is attached to the north wall of the chancel and accessed through double wooden doors through the east wall of the north aisle; both vestries have fitted wooden cupboards. The nave roof is a wooden barrel vault and the aisles have large lean-to trusses to each column and timber purlins at the mid point. The nave has exposed red facing brick walls and is divided from the aisles by five pointed arches supported on alternating octagonal and circular columns and capitols: piers and arches are in ashlar sandstone. Both aisles have stained glass windows. The benches are pitch pine and the floor is tongue and groove boarding. The lobby occupying arch four of the north aisle is oak-panelled with double wooden doors with leaded upper panels. The sandstone font at the west end comprises a shaft of four attached pillars and an octofoil bowl. Toilets inserted into arch five of the same aisle and a kitchen and former Sunday school room (now a crèche) inserted within arches four and five of the north aisle are not of special interest.

A rise in the population of the parish of Tynemouth led to the creation of a new parish in 1877 and plans for a new church funded by public subscription. A site was donated by Captain Linskill of Tynemouth Lodge and the intention was to build a replica of St Andrew’s Episcopal Church in St Andrews, Fife (listed Category B) designed and built by the firm of Anderson and Brown of Edinburgh between 1867-9. In the event the design was modified to suit the site and used more English details while retaining many similarities with the Scottish church. The foundation stone was laid in September 1881 by the Rt. Hon., the Earl Percy, MP. From the beginning, the construction of the church was hampered by a shortage of funds and when it was opened in June 1884 by the Bishop of Newcastle, who also consecrated the church in September of the same year, it was incomplete and consisted only of an aisled nave. In 1878 the pulpit from St Nicholas’s Cathedral in Newcastle was presented to the church and in 1885, an organ by Messrs. Foster and Andrews of Hull from Christ Church, Sunderland and a font designed by Anderson of Edinburgh were installed.

Efforts continued to complete the building with the chancel and organ chamber completed in 1888, although a tower and spire were yet to be constructed. During the First World War, further work was undertaken including the installation of an organ screen, oak choir stalls, and part of the marble chancel floor and in 1917, an oak entrance porch was added. In memory of the Fallen, the stained glass in the east window was erected at a cost of c. £613, to the designs of Martin Travers (1886-1948). Stained glass was installed in the aisles in the early 1930s, two of those in the south aisle by Messrs. Reed, Millican & Co. of Newcastle. The Lady Chapel, and its oak reredos, was constructed in 1937 designed by the vicar Thomas Douglas. At the same time instead of the long held intention to add a tower and spire, it was proposed to construct a two-storey alternative consisting of vestries and a council chamber; the onset of the Second World War intervened and this building was constructed in 1954. In 1999, a ‘church hall’ consisting of a kitchen, a sunday school room and toilets were inserted into the rear of each aisle.

The church was designed by the renowned Scottish architect Sir Robert Rowand Anderson (1834-1921) whose biography in the Dictionary of Scottish Architects and entry in the Oxford Dictionary of National Biography summarises his achievements. One time assistant to George Gilbert Scott, Anderson set up independent practice in 1868 and is remembered for his host of schools and churches although other significant designs include Mount Stuart House, Isle of Bute, Central Station Hotel, Glasgow and the National Portrait Gallery and Museum of Antiquities, Edinburgh (all listed Category A). He was a highly respected architect who deliberately restricted his practice to Scotland, and is considered a restorer of restraint and taste; he was knighted in 1902 and awarded the RIBA Gold Award in 1917, the same year that he established the Institute of Scottish Architects and became its first president.

Church of St Augustin is listed at Grade II for the following principal reasons:

* Architect: it is a rare example of the highly regarded Scottish Architect, Sir Robert Rowand Anderson, in England.

* Architectural interest: designed as a replica of St Andrew’s Episcopalian Church in St Andrews, it is accordingly of good design and well articulated in Early English gothic, although adapted for its site and English taste.

* Materials and craftsmanship: good quality materials are used throughout the interior, which have been skilfully blended; there is a high level of craftsmanship in details such as the font and carved organ screen

* Intactness: although not finally completed until the mid C20, the church displays a high level of external and internal intactness.

* Stained glass: the memorial East window is a striking example of the work of Martin Travers, considered one of the most distinguished church furnishers and stained glass painters of the C20.