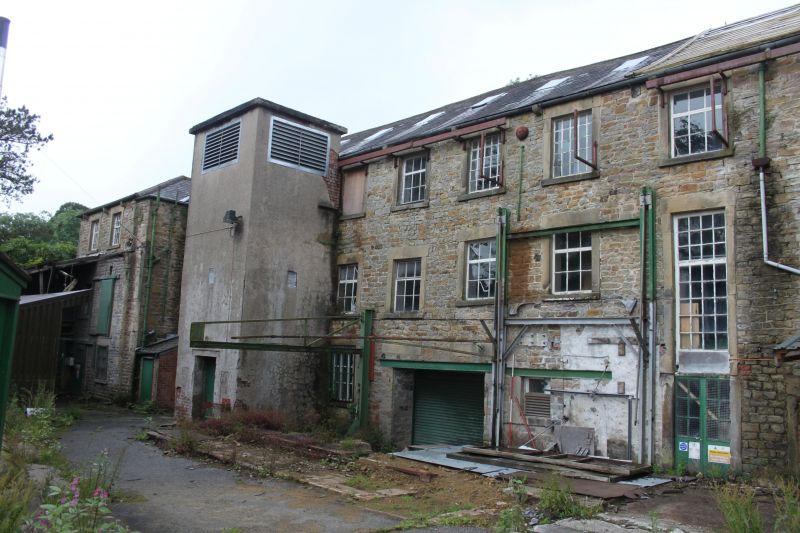 Kirk Mill is a former cotton spinning mill of 1785 with its associated mill pond's retaining walls, outflow and stone-built leat.

PLAN: The mill is linear in plan with projections to the north and south. The water management features lie to the north of the mill.

EXTERIOR: The south face has a central range of ten bays flanked by projecting wings of two bays at either end, with the wing to the west obscured on all but its upper storey by later buildings and lean-to roofs while the wing to the right is built of stone at its ground and first-floor level but brick above. A later rendered brick-built flat-roofed extension rising to just above eaves height has been added to the front of the building between the sixth and eighth bays. Two modern roller shutter doors have been inserted at ground-floor level while a modern canopy projects forward at first-floor level to the right of the wider door. Windows have glazing bars with dressed stone surrounds to the central range and west wing and dressed lintels and sills to the east wing.

The west face has two doors and windows with glazing bars and dressed stone surrounds to all floors.

The east face comprises two gables each of two storeys that, because of the slope, form the second and third floor of the mill building. The left gable is of two bays and forms the east face of the south-projecting east wing. The right gable has been extended north and has a door beneath the gable's apex above which is an upper floor warehouse door. Above this there is a blocked warehouse-type opening to a former attic level. Windows and surrounds are consistent with those elsewhere.

Roofs are pitched with lights to the former attic.

To the rear of the mill there is a large mill pond contained within a sandstone retaining wall. A stone-built outlet at the north end of the pond empties into an adjacent stream. A short sandstone bridge or leat connecting the pond and mill formerly carried water from the pond to power the waterwheel. Used water left the mill via an underground tailrace to empty into Chipping Brook some way downstream from the mill.

INTERIOR: Access via the east door from the adjacent road leads into a vestibule at first floor level off which there are storerooms and a timber staircase connecting the first and second floors. A narrow passageway passes the enclosed wheelpit, waterwheel and driving gears. The waterwheel has timber spokes of pitch pine and was breastshot, with water entering at a high level. The narrow passageway leads into the mill's wooden-floored first floor which is now occupied by chairmaking machinery. Iron and timber posts support timber ceiling beams, some of which display drive beam slots relating to the former powering of the cotton spinning machines. A wooden staircase near the north-west corner of the first floor gives access to the ground and second floors and a spiral stone staircase off the rear wall gives access to the second floor.

The ground floor has a concrete floor and retains some machinery associated with chair manufacture. Some modern steel ceiling beams and supporting posts have been inserted.

The south-east corner of the second floor has latterly been used as a staff kitchen. The remainder of this floor was used recently as a showroom. As with the first floor the second floor is of timber with iron and timber posts supporting timber ceiling beams. Although ceiling beams remain in situ the floor of a former attic level has been removed leaving the second floor open to the pitched roof.

The stone spiral staircase leads upward to a storeroom and a door formerly giving access to the attic level.

In 1785 Hugh Stirrup, Richard Salisbury, John Shakeshaft and William Barrow bought a C17 disused corn mill and built on its site a spinning mill, Kirk Mill, that was powered by an external waterwheel. This early Arkwright-type mill is one of the oldest of its kind in the country. It measured about 21m by 8m and housed 20 spinning frames with 1032 spindles and machinery for six more frames of 48 spindles.

Richard Arkwright (1732-92) invented the Water Frame in 1769, a machine using rollers to stretch cotton threads to produce a yarn stronger than that previously available. This machine was a big instrument that needed power to drive it. Its invention meant the setting up of mills or factories and if any one invention may be the prime cause of the modern factory age it was the development of the Water Frame. Where the power used was water the mills tended to be built in isolated places in the countryside such as Arkwright's mills at Cromford, (Derbys.) or this one here at Chipping, but when steam was later introduced they tended to be grouped together on the coalfields.

By 1790 the mill was in new ownership and during this decade the mill was enlarged at the west end to take extra machinery. Ownership changed on several occasions during the C19 and gas lighting was installed together with a steam engine which was used occasionally during water shortages. The Cotton Famine during the American Civil War brought an end to cotton spinning at Kirk Mill and in 1866 the building was sold together with two steam engines, 25 carding engines, 31 throstle frames and a 32ft diameter waterwheel.

The mill and many auxiliary buildings were sold to Thomas Marsland who rented it to chairmakers. In the 1880s Berry's took over the mill for chairmaking and the breast shot waterwheel was the sole means of power until 1932 when an oil-powered engine was installed to provide supplementary power. The mill was extended to provide kitchen and canteen facilities and the present waterwheel, the third known at the site and in operation until 1943, was partly removed to create a side entrance.

Kirk Mill, a former cotton spinning mill of 1785 and its associated mill pond's retaining walls, outflow and stone-built leat are designated at Grade II for the following principal reasons:
* Rarity: it is a rare surviving example in the north-west of an Arkwright-type cotton spinning mill that exhibits two phases of C18 development
* Intactness: it retains its contemporary water management system comprising the mill pond's retaining walls, outflow and leat
* Survival of original and early features: it retains many windows and doors, the wheelpit and the waterwheel and its driving gears, together with evidence of how associated drive shafts and belts powered the early machinery
* Historical: Kirk Mill was built in 1785. it is one of the oldest surviving cotton spinning mills in the north-west and thus represents one of the earliest examples of a textile factory that soon became a crucial component of the Industrial Revolution.
* Layout: the mill's development over its two hundred year history remains clearly legible.