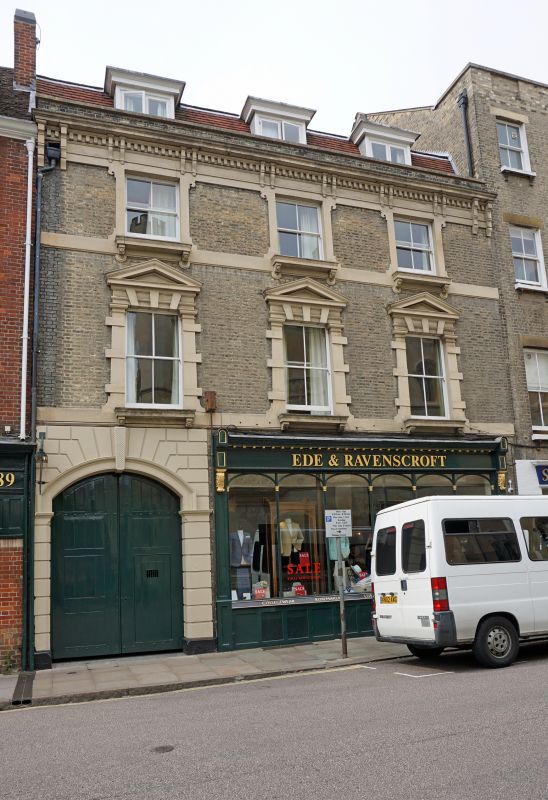 A former dwelling of the C15 and C17 attached to a mid-C19 front range, altered in the C20, now part of St Catharine's College. The front range has a late-C19 shop at the ground floor.

MATERIALS: The earlier phases are timber-framed, with rendered brickwork and terracotta tiled roofs. The mid-C19 frontage building is constructed of white brick with stone dressings.

PLAN: 'T'-shaped in plan, No. 70 Trumpington Street comprises three main elements. The mid-C19 frontage building has a shop at ground floor with student accommodation above. Attached at right angles to the rear of the C19 build are two bays of a C17 building with a mansard roof which is adjoined by a single bay of a mid-C15 timber-framed building further to the east.

EXTERIOR: The rendered C15 timber-framed building faces the courtyard garden and has a tiled, gabled roof and end stack. The west elevation has a late-C18 or early-C19 inserted chinoiserie french window at the ground floor. Above are twelve-light horizontal sliding-sash windows with a C20 glazed door to the left. The north gable end has tripartite casement windows at the first floor and there is an external stack at the south elevation. Part of the wall and floor frame of this earliest timber-framed structure, painted with foliate decoration to the infill panels, appears to survive as a fragment at the rear of the ground floor of the C19 shop. The linked C17 building is rendered and has a tiled mansard roof. Added to the south elevation is a C19 single-storey range aligned north-south. The ground and first floor have inserted C20 openings and there is a C20 dormer on the lower pitch of the roof. The north elevation has a projecting C20 window and dormer in the position of an earlier opening, evidenced by an in situ timber lintel. The mid-C19 building has a late-C19 glazed, shop front at the ground floor with an arched, carriage entrance to the left, faced with ashlar stone blocks. The shop front is divided vertically by slender colonettes into six panes with arched heads and plain glass spandrels. The fascia has the wording ‘Ede and Ravenscroft’ and has a simply moulded cornice supported on carved consoles rising from the pilasters which frame the front. The windows on the first floor have moulded stone surrounds with pediments above. Above the second floor windows is a heavy cornice to the eaves with modillion and dentil decoration. The dormer windows at the attic are probably C20 in date.

INTERIOR: On the ground floor, the walls of the principal room have overpainted, early-C17 plaster strapwork in the upper panels of contemporary, coffered panelling. The plaster has foliate and double scroll motifs. Some of the panelling has been replaced and on the south wall an early-C19 alcove has been inserted through it. The fireplace in this room has been lost. On the first floor, a complete C15 crown-post roof is exposed, with pegged jointing, cranked tie beams and upward bracing. One tie beam is chamfered and stopped at both ends. There are two rear wall posts and part of the wall plate is apparent, but there is no exposed wall framing, which is perhaps obscured beneath the interior plaster. A two panel Georgian door leads into a smaller adjoining bedroom where there are exposed jowled storey posts. A C20 opening leads to the remodelled first floor of the C17 building, where part of a bridging beam, but no other framing, is apparent and all the fixtures and fittings are of the C20. The interface between the C17 and C19 building has been remodelled in the C20. On the first, second and attic floors of the mid-C19 building, all of the fixtures and fittings are C20 in date and the plan-form has been altered to provide student accommodation. At the rear of the shop on the ground floor, a wall and floor frame, fragment of a timber framed building, painted with foliate decoration to the infill panels, remains.

St Catharine's College was founded in 1473 by Robert Woodlark for a Master and three Fellows. It was largely rebuilt in the C17 with work on the Main Court beginning in 1673; the Chapel was completed in 1704.

No. 70 Trumpington Street was built in the C15, remodelled and extended partly in the C17. The original form of these earlier structures is uncertain. It seems probable that the C17 structure replaced an earlier building, of which the C15 structure was a part, and is contemporary with the reconstruction of St Catharine's College generally and the interior remodelling of the C15 bay. In the C19, a two-storey with attic range was added to the front of the two-bay, C17 building.

* Architecture: The building comprises C15 and C17 phases with a mid-C19 front range, demonstrating the evolution of high status urban housing in one of the most important cities in England;
* Interior: The building incorporates C15 timber framing including a crown-post roof and a principal room, remodelled in the early C17, with panelling and plasterwork of that date. The fragment of C15 timber framing with decorated panels at the rear of the shop is also a feature of interest;
* Alterations: the mid-C19 range added to the front has architectural distinction in its elevational treatment and a late-C19 shop front of note, contributing to the special interest of the whole;
* Group Value: The building reflects the historical development of St Catharine's College and has group value with the Grade I listed College buildings to the north and other listed buildings in the immediate vicinity.