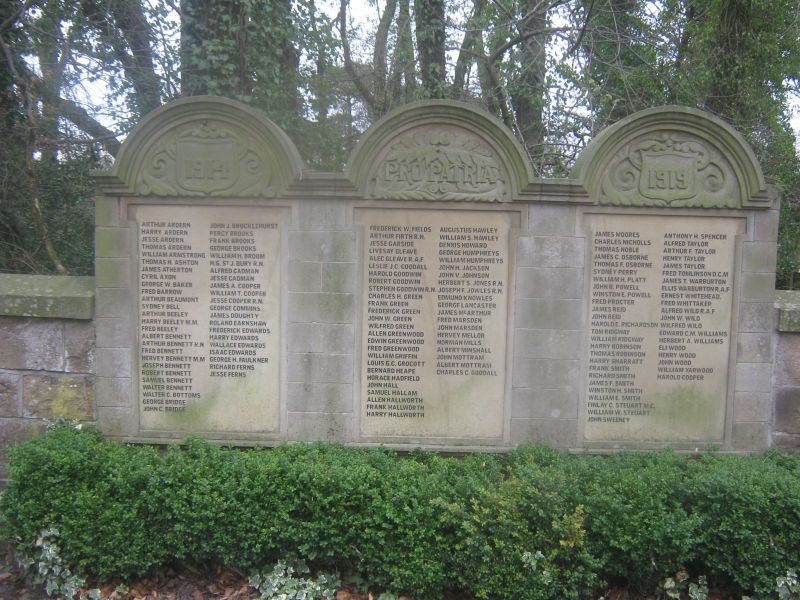 PLAN: cross on hexagonal plinth and steps in centre of small rectangular garden. Wall behind cross, on north side of garden, incorporating three panels.

DESCRIPTION: cross is modified version of Blomfield Cross of Sacrifice with tall Latin cross with a stone relief carving of a downward pointing sword. At base of cross shaft is a relief carving of the coat of arms of Cheshire with three wheat sheaves. Cross is set on a high octagonal plinth with a stepped base and two wide, shallow steps. The front face of the plinth is inscribed IN / GRATEFUL REMEMBRANCE OF / THE MEN WHO AT THE CALL OF DUTY / WENT FROM THE PARISH OF HIGH LANE / TO THE GREAT WAR OF 1914-1919 AND / FOUGHT IN DEFENCE OF LIBERTY AND RIGHT / RECORDED UPON THIS CROSS / ERECTED BY THE PARISHIONERS / IN THE YEAR OF OUR LORD 1920 / ARE THE NAMES OF 30 MEN / WHO LAID DOWN THEIR LIVES / ALSO 1939-1945 / GREATER LOVE HATH NO MAN THAN THIS / THAT A MAN LAY DOWN HIS LIFE / FOR HIS FRIENDS. The 30 names are inscribed on the two main side faces and the Second World War names are inscribed on the rear face of the plinth.

Behind the cross are three panels which project above a low coursed stone wall with chamfered stone coping. The shouldered rectangular panels are set into a coursed stone frame with a round-headed arch with moulded hood over each panel. The arch heads contain low relief carvings; to left is shield with date 1914, to right is shield with date 1919, and in the centre is carved PRO PATRIA (For One's Country), all surrounded by foliate carving. The panels are inscribed with 139 names.

The war memorial was erected in 1920 by the parishioners of High Lane to commemorate the men of their parish who fought in the Great War of 1914-19. The names of the 30 men who died were inscribed on the pedestal of the cross, whilst the 139 men who fought for their country and returned were listed on three stone panels in a wall behind the cross. The sculptor was Alfred Frith of Macclesfield. Subsequently, the four soldiers who lost their lives in the Second World War were added to the cross plinth, and also two civilians, William Davies and Ronald Morris, who lost their lives in 1946 as a result of enemy action.

The High Lane War Memorial is designated at Grade II for the following principal reasons:
* Historic Interest: as a poignant reminder of the tragic impact of world events upon an individual community, commemorating the men from the parish of High Lane who lost their lives fighting in the First and Second World Wars;
* Local Interest: the monument also unusually commemorates those men of the parish who participated in, and returned, from the First World War, being a testament of acknowledgement and gratitude by the community towards those who fought for the country's liberty, and also commemorates two civilians who lost their lives due to enemy action during the Second World War;
* Design: a well-designed and carved stone memorial based upon a Blomfield Cross of Sacrifice, standing in a remembrance garden, with three large plaques commemorating local soldiers from the First World War set into the garden wall behind the cross;
* Group Value: the war memorial stands next to the churchyard and has group value with the adjacent Church of St Thomas and Lychgate.