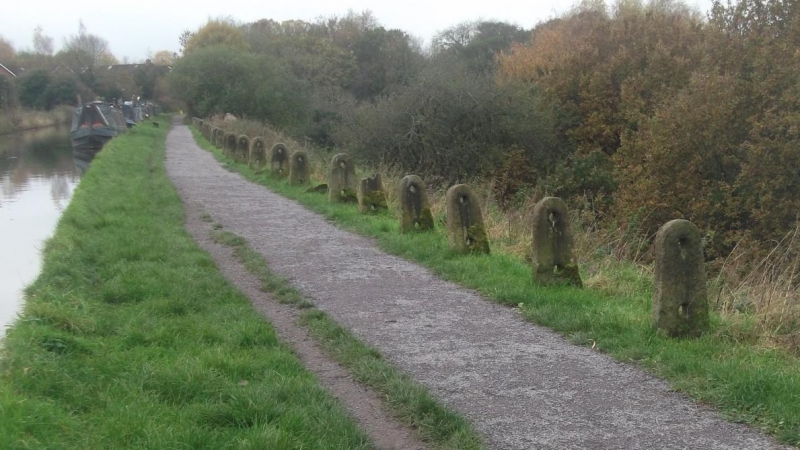 LOCATION: The fence posts are located along the outside edge of the tow path on the north-west side of the Macclesfield Canal approximately between SJ8803362509 and SJ8793762377. At these points the canal is located on a high embankment over Dane-in-Shaw Brook opposite the Dane-in-Shaw railway viaduct.

DESCRIPTION: The fence posts, of which 38 are visible, are constructed of local sandstone and are formed of roughly-hewn, tapered slabs. The posts are approximately 1-1.5 metres high and are each pierced by two railing slots. A small number of the posts are damaged at the top, but most are intact. The fence posts are evenly spaced, although some in the line are missing.

The Macclesfield Canal was approved by an Act of Parliament in April 1826 and was one of the last narrow canals to be built. The route of the canal was surveyed by Thomas Telford and the engineer was William Crosley. The canal was constructed at a cost of £320,000 and opened on 9 November 1831.

The canal fence posts south of bridge no.72 are believed to date to c1840, and originally incorporated removable wooden rails/poles that enabled spoil to be tipped down the embankment.

The Macclesfield Canal fence posts on the tow path south of bridge no.72 are listed at Grade II for the following principal reasons:

* Historic interest: they are important survivals illustrating the history and use of the Macclesfield Canal in the early-mid C19;

* Intactness: the fence posts are believed to survive in their original location and are largely intact;

* Group value: they have group value with other nearby Grade II listed structures along the canal, including bridge no.72, the Biddulph Valley Aqueduct, and a milestone at SJ 8782 6233.