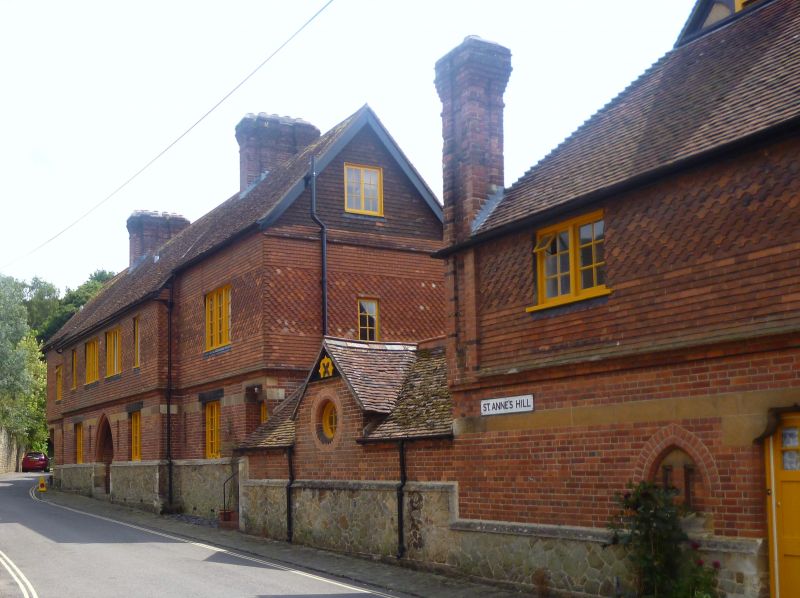 PLAN: the six two-and-a-half-storey cottages form an L-shaped group at the corner of St Anne's Hill and Edinburgh Square. The cottages are simply planned, with kitchen and living room on the ground floor and two bedrooms above. Each has a single-storey service range, originally containing scullery, coal store and WC, projecting at the rear into a small private yard; these yards in turn open onto an alleyway accessed via an archway from the square. The former Sunday school, a single-storey hall, is set at a slight angle at the eastern end of the row.

EXTERIORS: the style is a free Arts and Crafts interpretation of the local vernacular with an admixture of Gothic detail; the composition is loose and picturesque, accentuating the irregular street line with much projection and recession and strong contrasts in height and scale. The upper floor is tile-hung throughout, with alternating bands of plain and scalloped tiles. There are steep tiled roofs with scalloped barge-boards and tall ridged and corbelled stacks. Windows are small-paned timber casements, and doors have similar glazing in their upper panels; all except those on the hall are now painted in the 'Cowdray Yellow' of the estate.

The cottages are in two main blocks. Nos. 342-345, to the east on St Anne's Hill, comprise a long, roughly symmetrical rectangular block under a single pitched roof. Nos. 343 and 344 stand slightly forward in the centre, with their front doors set within a Gothic-arched recess flanked by two narrow slit windows. To the rear, tall gabled dormers light the attic space. Nos. 346 and 347 face Edinburgh Square, with twin gables projecting forward from a higher gablet roof with a big central stack. The street corner is canted at ground level, with a stylised nodding-ogee canopy supporting the upper floor; the perspective published in the Building News shows this enclosing a carved heraldic crest and a drinking fountain, but there is no evidence that this was ever executed. The doorway to No. 346, facing St Anne's Hill, has a shouldered surround with a small blind Gothic-arched 'window' to the left. The rear outshut to this house forms the connection between this and the other main block, and is given emphasis by a central cross-gable with a circular window and decorative timberwork in the apex. No. 346's doorway, facing the square, sits within a Gothic-arched recess; a larger freestanding Gothic archway to the right leads through to the alley.

St Ann's Hall (the spelling varies) stands alongside No. 342 at the rear of the group. Its gable-end faces the street and is tile-hung at the apex with a large mullion-and-transom window below; to the right is the entrance doorway, and to the left a Gothic-arched gateway leading to the side passage.

INTERIORS: those of the cottages are very simple, with four-panel doors, plain timber skirtings and stairs with square newels and stick balusters. The former school has an arch-braced roof, now concealed by a modern suspended ceiling.

These buildings comprise a group of estate cottages and a former Sunday school, the latter now a community hall. A version of the design was published in the Building News on 7 June 1878, at which point the buildings were described as being 'in course of erection'. The architect was EC Lee, and the builders Johnson & Sons of Chichester. The client is named as Jervoise Smith Esq, a member of the Smith family who owned the borough of Midhurst from 1795 until its re-acquisition by the Cowdray Estate in 1910.

Ernest Claude Lee, a.k.a. Ayton-Lee (1845-90) trained with the leading domestic architect RW Edis. He won the RIBA's Soane Medallion and Pugin Travelling Scholarship in 1869 and 1870 respectively, and later - as president of the Architectural Association in 1880-81 - established the AA's own Travelling Studentship. Much of his work was in Essex, where he built a number of churches including St Thomas, Brentwood and St Paul, Bentley. He also designed a number of schools and houses in Essex, Surrey and London. Until its destruction in WWII, his most prominent work was the Church of St Mary on Whitechapel High Street.

Nos. 342-347 St Anne's Hill and St Ann's Hall are designated at Grade II for the following principal reasons:
* Architectural interest: an unusually skilful and refined exercise in the Vernacular Revival, with imaginative detailing, strong picturesque grouping and a subtly varied palette of local materials;
* Planning interest: a tightly-planned cluster of estate cottages, unusually incorporating a Sunday school as part of the group;
* Group value: with other listed buildings on and around the old market place, including the Crown Inn, the Swan Inn, Granville House, the old town hall, the parish church, and the houses on the south side of Edinburgh Square.