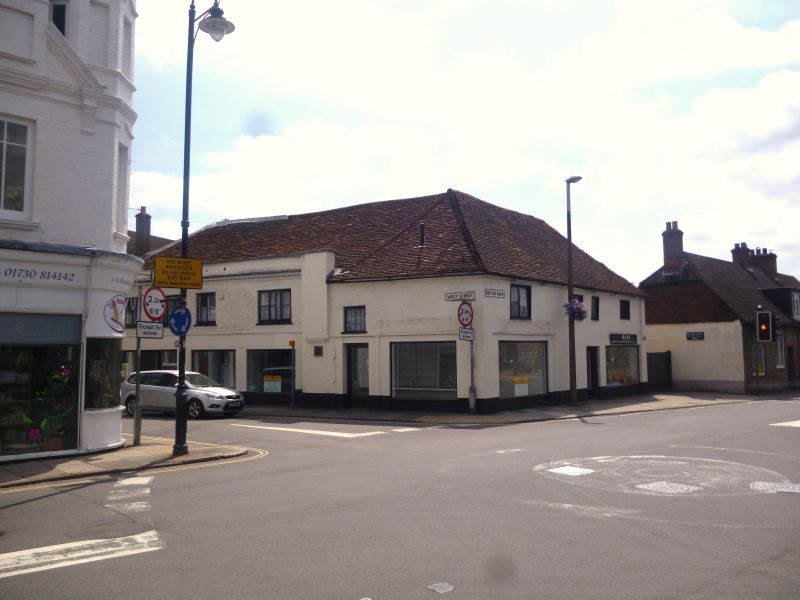 House, probably early C16, and possibly of Wealden type, facing Bepton Road. Eastern range fronting West Street, later C16 or C17 (but possibly the site of an earlier range) to which half-hipped bays were later added at the rear.

PLAN: the range facing Bepton Road may have comprised a central hall or chamber (now with an inserted floor and ceiling) flanked by two-storey wings and all under a hipped or half-hipped roof. This, coupled with evidence of a recessed central bay suggest a plan typical of a Wealden house. The northern bay may have been rebuilt.

The range facing West Street is also in two storeys, with added rear bays with half-hipped roofs. The upper floor building has been converted to flats, which have added partitions, and where the original fabric is partly covered. New stairs and a corridor have been built within the rear half-hipped bays.

EXTERIOR: Bepton Road: in two storeys and three irregular bays. The ground floor has two large late C20 shop windows and a shop entrance. The first floor has irregular timber casements. The roof is hipped to the north and half-hipped to the south where the gable wall is of coursed limestone rubble with red, brown and grey brick quoins and window openings. The quoins to the street angle are rendered. Two and three-light timber casement windows beneath reworked cambered arches, one blocked window opening under the eaves. The rear wall is tile-hung.

West Street elevation: also in two storeys, is largely replaced or cased in painted brick with a clear division between the north-south and east-west ranges. The eastern bays have a rendered parapet above a brick dentil cornice, and two and three-light timber casements. The ground floor is largely replaced and has large shop windows.

Rear: half-hipped roofs to tile hung bays above a C20 ground floor, extended in brick. To the south-east is an added two and a half storey wing, clad in weatherboarding. It is either later C19 or C20 and heavily restored.

INTERIOR: the ground floor has been reordered to provide shops and accommodation. On the first floor there has been some reworking of the timber frame and roofs, reusing and introducing new material.

Flat 1 has an exposed timber frame where a pair of jowled posts and the cut-off top plate at the outer, street face of each truss suggest a recessed central bay typical of a Wealden house. The former recessed outer wall has been removed and replaced with a wall aligned with the flanking bays and there is no surviving evidence of mortices for brackets to support the top plate. The crown post roof has plain slender shafts and braces to the collar and collar purlin, the latter hidden behind a suspended ceiling. The room to south (bedroom) has exposed close studding on the outer wall and repaired framing elsewhere.

Flat 2 : where the frame is exposed on the rear of the bedroom and bathroom wall, the rear wall of the Bepton Road range is arch-braced. There is no evidence of close studding to match the framing in Flat 1 but there is a mortice for a sliding window or shutter in the top plate of the West Street elevation, which is also stop chamfered. Butted against this building is a later timber framed building facing West Street. The rear wall of this range, now internal, forms the inner corridor wall. The roof above West Street has been repaired and some timbers replaced in softwood. Access to the roof is limited but an arch-braced collar of an open truss and pairs of coupled rafters appear to relate to an early phase of the structure. Half-hipped rear roofs have been repaired and reworked. Between the main and rear roof is a small area of un-plastered wattle partition.

Bepton Court stands to the south-east of the junction of Bepton Road and West Street, which is one of the main historic streets in Midhurst that leads to the square and medieval parish church. Midhurst is of C13 foundation and is rich in C15 and later buildings. Bepton Court appears to comprise two separate buildings which faced Bepton Road and West Street.

The principal building appears to have been an early C16 house, possibly of Wealden type, facing Bepton Road. Unlike the majority of buildings facing West Street to the east, it is not built on a narrow burgage plot typical of a medieval town centre but on a larger open site suggesting this was the limit of the densely built town at that time. Based on the structure and scantling of the timber, the house appears to be of early C16 date. The gable wall was encased in brick in the C17 or early C18. The West Street range appears to be of later C16 or C17 date. However, elements of the roof suggests that an earlier building may have been incorporated in the later building. At a later date, perhaps in the C17 or early C18, small half-hipped bays were added to the rear, southern elevation of this wing. Photographs taken in 1961 suggest an early to mid-C18 refronting, with regular first floor windows, a dentil cornice and parapet. The upper floor, parapet and dentil cornice have since been rendered and painted, obscuring some of the detail. Similar photographs also show the Bepton Road elevation with three small-paned upper floor casement windows, a tall south gable stack and a projecting shop window.

More recently a further wing was added to the south-east, very likely replacing an earlier range. The building was renovated c2000 when ground-floor shops and upper-floor flats were refurbished. While the later C20/early C21 wing is of limited architectural interest it is attached to the historic fabric and lies within the site which has the potential for archaeological interest.

* Architectural interest: upper floor and roof of a substantial late medieval building, possibly of Wealden type, with a recessed central bay with a tall slender crown-post roof and chamber with a close-studded street elevation; part of timber frame of east-west wing facing West Street, with an arch-braced roof truss, possibly of an earlier roof; re-fronted in C18;
* Plan: recessed upper floor, central bay with first-floor chamber to south, reminiscent of a Wealden plan, that is unusual in this urban setting;
* Historic interest: significant as a rural building type with its principal facade facing Bepton Road defining the possible limit of the medieval town, while the West Street facade was re-fronted in a manner typical of urban buildings in the C18.