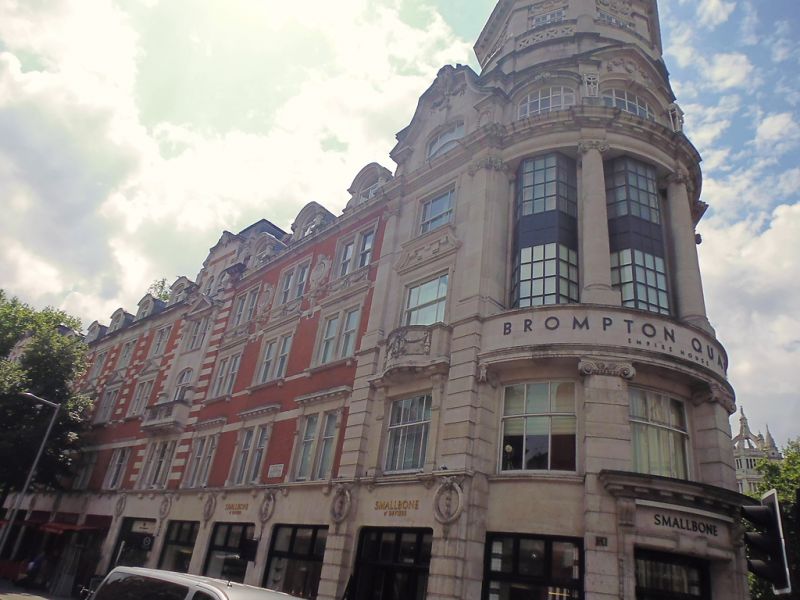 Former showroom, warehouse and offices of the Continental Tyre and Rubber Company, 1909 to 1916 (or later) by Paul Hoffmann; converted to shops and flats 1925 by Henry Branch.

PLAN
This very large building, of four-and-a-half storeys plus basement and attic, occupies a triangular 'flat-iron' site at the junction of Thurloe Place and Brompton Road. It comprises three main blocks and was built in two phases. To the first phase, completed by 1911, belong the five-bay entrance block adjoining the Rembrandt Hotel on Thurloe Place (block A) and, behind it, the long, curving eight-bay range to Brompton Road with its short return to North Terrace (block B). The second phase, built from 1915, filled the triangular gap between the two earlier parts and comprised the domed corner block with its angled return wings of three and four bays to Brompton Road and Thurloe Place respectively (block C). The left-hand part of the North Terrace range also belongs to this phase.

As originally built, block A formed the main public entrance to the complex and contained what a contemporary magazine report describes as 'a luxuriously fitted entrance and reception hall' on the ground floor, with the managing director's office and boardroom on the first floor, and further offices and a flat - designed 'for the use of any of the company's customer's in case of emergency' - on the floors above. Block B contained arrival and dispatch rooms on the ground floor, with access to 'a large covered yard for the accommodation of motor-cars and lorries' - entered from North Terrace - behind; smaller offices arranged along corridors filled the upper floors. The principal offices seem to have migrated to the first and second floors of block C when the latter was completed, with showrooms at ground level. Each block contained its own stairway and lift. The basement and attic storeys throughout were used for storage and packing. These arrangements were radically altered in the 1925 conversion, with a series of shop units installed on the ground floor and the upper floors divided up into flats.

EXTERIORS
The style is a florid Free Baroque with much sculpted decoration in Portland stone set against red brick; the overall effect seems intended to reflect that of Aston Webb's slightly earlier front range to the Victoria and Albert Museum, diagonally opposite on the north side of Thurloe Place. The various ranges are each slightly different in character, but are unified at ground level by a continuous stone 'arcade' whose dividing piers are emblazoned with wreaths in the form of winged car tyres - a motif that recurs throughout the building.

The entrance block facing Thurloe Place (block A) is a tightly-composed unit of five narrow bays, the lower two storeys and the attic faced in channelled stone and the intervening floors in red brick with stone quoins and architraves. The main entrance (which now opens into one of the shops) has an extravagant Baroque surround with pilasters and triple keystone, surmounted by a scrolled and swagged pediment, a large winged tyre/wreath and Michelangelesque reclining figures. On either side are pairs of arched windows with triple keystones; that to the far left has been made into a doorway giving access to the flats above. A balcony balustrade spans the second floor, interrupted in the centre by a canted window bay that rises through the full height of the building to form a saucer-domed cupola at roof level.

The Brompton Road range (block B) is more relaxed in its treatment, with broader bays divided on the upper floors by banded brick and stone pilasters. The slightly projecting outer bays are stone-faced with second-floor balconies and, above, shaped gables flanked by miniature obelisks. On the return to North Place is an archway giving access to the former covered yard, above which is a relief displaying the Continental insignia of a rampant horse in a winged roundel, accompanied by a scroll inscribed 'CONTINENTAL TYRE AND RUBBER COMPANY'.

The corner block (block C) forms the architectural climax of the ensemble. The curved corner section is entirely stone-faced, with two giant Ionic orders set one above the other (rusticated pilasters below, engaged columns above) supporting a heavy octagonal cupola. At ground level is a doorway with a lugged surround and projecting cornice; this once contained a revolving door and formed the main entrance to the showrooms, but is now glazed in as a shop window. Canted metal-framed bay windows protrude between the columns of the upper order. To left and right are framing bays with shaped gables and curved swag-fronted balconies. The connecting wings to Brompton Road and Thurloe Place are treated in a similar way to block B, but without the banded piers and with large tyre/wreaths set between the third-floor windows.

INTERIORS
These were comprehensively remodelled c1925, with shops at ground level and flats above. With the exception of the three main staircases, few original features now remain. The ground-floor reception room in block A has been partitioned up to form a shop and a lobby to the flats, and only fragments of its rich plasterwork survive. Behind this is the main stairway, with ornamental iron balusters and square mahogany newels topped with ball finials. The stair in block C adjoins this and has a more delicate balustrade of wrought-iron scrollwork without newels. In the rear part of block B, accessed from North Terrace, is a third, much plainer stair. The central archway in this range gives access to a covered yard with glazed pitched roofs. The upper-floor flats have panelled mahogany doors set in simple Classical architraves, presumably installed in 1925.

The Continental Caoutchouc und Gutta Percha Compagnie was established in Hanover in 1871, manufacturing a variety of rubber products including solid tyres for coaches. Production of pneumatic tyres for motor cars began in 1898, and in time Continental became one of Europe's leading manufacturers. The firm's UK subsidiary, the Continental Tyre and Rubber Company Ltd, had its first showrooms in Clerkenwell Road, but in 1909 an application was made to erect a grand new headquarters building in the more fashionable environs of South Kensington. Paul Hoffman, the architect of several large commercial and residential blocks in Kensington and the West End, provided the designs. The site, at the corner of Thurloe Place and what is now Brompton Road, was subject to a street improvement scheme by Kensington Metropolitan Borough Council, and there were protracted negotiations between the developer, the freeholder (Lady George Campbell), the Borough and the LCC as to precisely what building line should be adopted. The first phase, including the entrance block to Thurloe Place and the south range to Brompton Road, was completed by 1911. The second phase, comprising the corner block - on the site of the old Bell and Horns public house - was built from 1915; part of the site was used during the latter years of the First World War to build temporary huts for prisoners of war, suggesting that the building was not finally completed until after 1918. Continental seems to have quitted the site in 1925, at which point the building - now known as Empire House - was converted into shops and flats by the architect Henry Branch. In 1927 the rear service yard was converted into a garage for Messrs John Landon & Co.

Empire House, 220-244 Brompton Road, built for the Continental Tyre Company in 1909-16 to designs by Paul Hoffmann, is listed at Grade II for the following principal reasons:
* External architectural interest: an extremely opulent piece of Edwardian street architecture on a very prominent central London site.
* Sculptural quality: good figure sculpture over the main entrance, and further sculpted decoration on the principal elevations, all displaying tyre/wreath iconography referring directly to the building’s purpose.
* Historic interest: a grand commercial building visibly related to the motor trade, testifying to the growth of motoring in Edwardian England.
* Group value: with the Victoria and Albert Museum (whose external treatment it echoes), the Brompton Oratory and other nearby listed structures.