Milestone standing at the entrance to the depot of Mounts Bay Coaches, at NGR SW4851231161 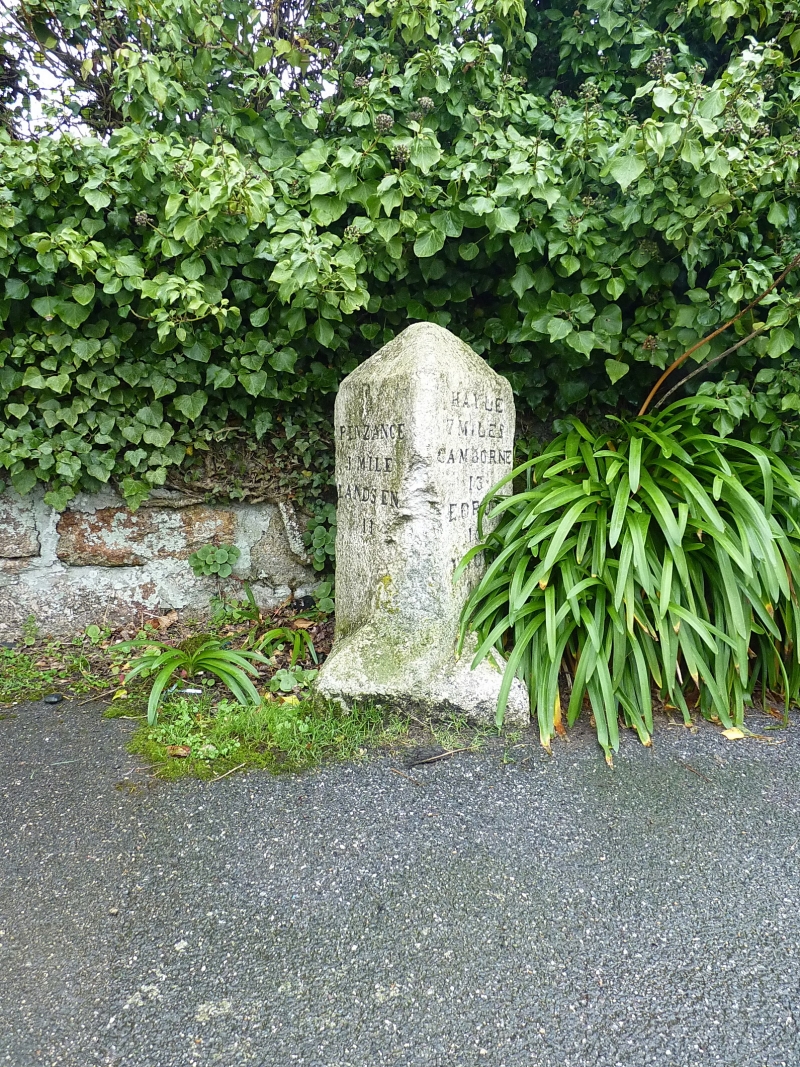 Entry Name: Milestone standing at the entrance to the depot of Mounts Bay Coaches, at NGR SW4851231161

A granite milestone standing at the entrance to the depot of Mounts Bay Coaches. The stone, which stands 0.84m high and is painted white, has a pyramidal head with a rectangular-on-plan base from which a triangular-on-plan shaft rises from large pyramidal stops. Two rectangular sides of the shaft face the road at an oblique angle and are inscribed with sans serif capital script lettering and Arabic numerals; the east face is inscribed PENZANCE / 1 MILE / LANDS END / 11 and the west face is inscribed HAYLE / 7 MILES / CAMBORNE / 13 / REDRUTH / 16 / TRURO / 25; the lettering is picked out in black paint. An Ordnance Survey benchmark has been carved on the top of the stone. The milestone is documented on the first edition Ordnance Survey map of 1880 as only being inscribed with the distances to Penzance and Lands End. This possibly suggests that the west face was inscribed in the late C19.

The Hayle Bridge Causeway Turnpike Trust was established by Act of Parliament in 1825 to construct a bridge, causeway and turnpike road across the Hayle River and Sands, from Griggs Quay in the west to Phillack in the east. It was established primarily to facilitate the transportation of copper ore from the neighbouring mines to the port at Hayle for export. In 1837 a second Act was passed to extend the turnpike road westwards to Penzance. The Griggs Quay and Penzance Turnpike was subsequently established with this milestone being one of six that were erected along its route. A third Act was passed in 1839 when the Hayle and Redruth Turnpike was established to extend the turnpike eastwards.

The milestone standing at the entrance to the depot of Mounts Bay Coaches in Penzance, at NGR SW4851231161, is listed at Grade II for the following principal reasons:
* Intactness: it is an intact milestone dating from c.1837, which remains in its original position
* Group Value: it has strong group value with the other surviving milestones along the road between Griggs Quay and Penzance, which are also listed at Grade II.
* Historical Association: it is a testament to the development of the turnpike system in Cornwall, particularly to facilitate transportation within a growing industrial landscape.