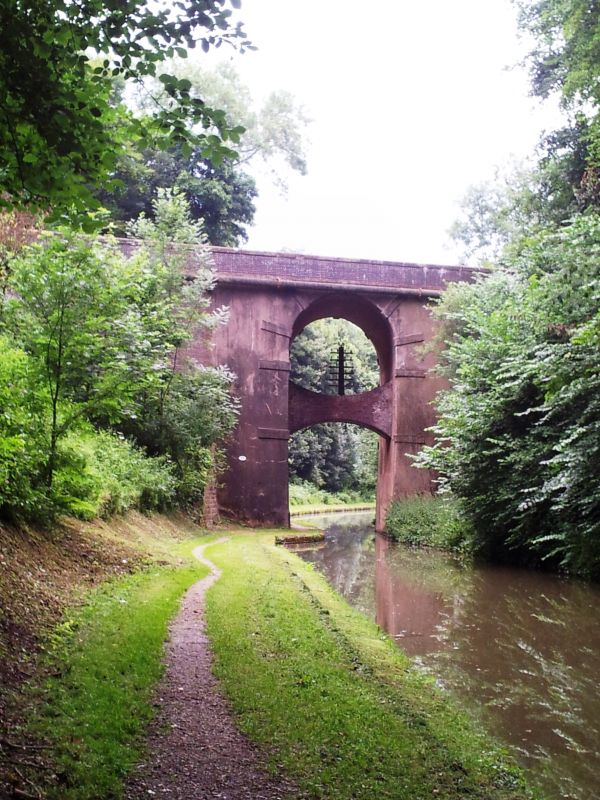 A canal bridge, erected in 1832-3 on the Birmingham and Liverpool Junction Canal, now the Shropshire Union Canal Main Line.

A canal bridge and wing walls, built 1832-3, for the Birmingham and Liverpool Junction Canal Company, by Thomas Telford, principal engineer; William Provis, consulting engineer and contractor; and Alexander Easton, resident engineer. A strainer arch was inserted into the bridge in the mid-C19 onto which a telegraph pole was placed in 1861 by the United Kingdom Telegraph Company. In the late C20 the bridge was partly cement rendered and the parapet rebuilt.
MATERIALS: The bridge is constructed from brick, now partly cement rendered, with a rebuilt parapet of blue engineering brick and stone coping. The revetment wing walls are of rock-faced rusticated sandstone.

DESCRIPTION: A single-span canal bridge carrying the A519 Newcastle-under-Lyme to Newport road over the Shropshire Union Canal Main Line. It consists of a semi-circular, horseshoe arch of around 12.2m in height, built on a slight skew. The north and south faces of the bridge have a stone band at road level from below which the spandrel walls are cement rendered, each face with exaggerated keystone and voussoir mouldings. A brick strainer arch with a segmental-arched top and bottom spans the principal arch at its half-way point and has a wooden telegraph pole affixed to its upper section. Attached to the tow path (west) side of the bridge are two iron rope fenders. The shallow road-side parapet has chamfered coping stones and terminates in square piers with chamfered stone caps. On the north and south sides of the bridge there are opposing revetment wing walls. A service pipe (not of special interest) runs across the south side of the bridge.

The Birmingham and Liverpool Junction Canal, now the Shropshire Union Canal Main Line, was established by an Act of Parliament in 1825 to link the Staffordshire and Worcestershire Canal at Autherley Junction in Wolverhampton to the Ellesmere and Chester Canal at Nantwich, thereby providing a link between the industrial West Midlands and the port at Liverpool. Built between 1827 and 1835, the 39 mile canal was the last major project to be lead by the civil engineer, Thomas Telford (1757-1834). The preliminary surveys, the necessary engineering evidence for Parliament and the designs for most of the principal structures were undertaken by William Provis (1792-1870) who, due to his heavy workload, turned down the role of the canal's resident engineer, the position being taken up by Alexander Easton (1755-1854). Povis, however, took up contracting and was subsequently awarded the contract to construct the bridge in 1829. Telford's characteristic direct-line routing resulted in the canal being built on many long embankments, and through many cuttings, some very deep. One such cutting is the Grub Street Cutting situated to the west of the village Woodseaves in Staffordshire. Running for a length of 2.7km, with a maximum depth of 15.2m, three bridges were built to span the canal, of which High Bridge (Bridge No. 39) was erected between 1832 and 1833 to carry the road from Newcastle-under-Lyme to Newport. Shortly after its construction, however, the pressure being exerted onto the bridge from the cutting walls required the insertion of a strainer arch. In 1861 the United Kingdom Electric Telegraph Company installed telegraph cables along the entire length of the canal and the strainer arch was subsequently used for the siting of a telegraph pole. The telegraph wires were replaced with telephone wires in 1870 and, although the wires have now been removed, the telegraph pole still survives in-situ. In the late C20 the parapet was rebuilt whilst the spandrel walls were cement rendered in 1961.

High Bridge (Bridge No.39) is listed at Grade II for the following principal reasons:
* Engineering interest: the bridge illustrates Thomas Telford's vision of constructing a canal that was engineered to his direct-line and level practice;
* Intactness: despite some minor repairs, it is a good example of a substantially intact canal bridge of the early-C19;
* Historic interest: in the context of both the Birmingham and Liverpool Junction Canal and as part of the national waterways system of the late C18 and early C19.