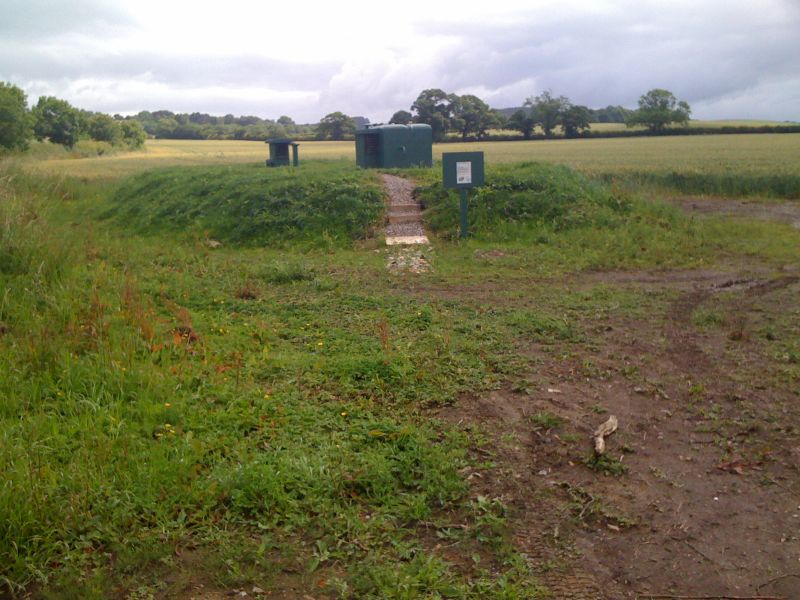 EXTERIOR
Appears as a rectangular, flat topped grass covered mound with a raised entrance hatch at the south west end and a smaller, raised air vent at the north east end. Between these two openings, protruding through the mound, are two metal pipes that were the mountings for monitoring equipment: The one closest to the hatch being for the probe for the Fixed Survey Meter (for measuring radiation); the other for the baffle plates of the Bomb Power Indicator. The mounting for the Ground Zero Indicator (a pinhole camera device for detecting the direction and altitude of nuclear explosions) is adjacent to the entrance hatch.

INTERIOR
The 4.6m deep entrance ladder-shaft has a drainage sump at its base and a hand operated pump. It gives access to a small closet for a chemical toilet and to the monitoring room which measures 4.6m by 2.3m. The floor of the monitoring room is covered with rubber (former National Coal Board conveyor belt material) and the walls and ceiling with polystyrene tiles. Original in situ fixtures include the shelving, desk and cupboard. The air intake vent retains its original mesh screen designed to filter out radioactive dust particles.

The Royal Observer Corps (ROC) was a civilian service, mainly staffed by volunteers. Its original role was to visually spot enemy aircraft, but in 1957 it became part of the newly formed United Kingdom Warning and Monitoring Organisation (UKWMO), charged with the task of reporting nuclear explosions and the monitoring of the resultant spread of radioactive fallout in the event of nuclear attack. This was facilitated by the construction of a national network of 1518 monitoring posts (1026 being in England) organised into clusters of 3-4 posts which then reported to regional Group Headquarters. In 1968 the number of maintained posts was halved and in 1991, with the end of the Cold War, the service was stood down and the posts closed.

Construction of the system of monitoring posts began in the late 1950s and was largely complete by 1965. The posts had three main tasks: to confirm that a nuclear attack had taken place and its location; to estimate its power; and to monitor the passage of radioactive fallout. They were built to a standard design to accommodate a staff of three and to be self sufficient for 21 days. The posts were buried below the ground surface and covered with an additional compacted earth mound designed to provide protection from blast and heat, and to reduce radiation penetration.

Brandsby ROC monitoring post near Zion Hill Farm was built in 1964, being opened in June. It remained operational, reporting to the Group Headquarters in Acomb, York, until September 1991 when the ROC was finally stood down. It was surveyed in 2002 by Subterranea Britannica and found to be intact, retaining much of its original equipment. In recent years it has been restored, including the repair of its covering earth mound and the collection of original equipment and other items allowing the post to be presented to visitors in its operational form. The large collection of items which are not fixtures and fittings are not included in the designation and are normally stored off site.

The former Royal Observer Corps monitoring post at Zion Hill Farm, one of a network of subterranean posts designed to monitor radioactive fallout following a nuclear attack, is designated at Grade II for the following principal reasons:
* Architectural Interest: An example of a standard design that is an architectural representation of the threat of nuclear attack during the Cold War.
* Intactness: The post is in an excellent state of preservation retaining its full complement of fixtures and fittings.
* Associated Value: In operation the post reported to the Group Headquarters in York which is preserved in the care of English Heritage.