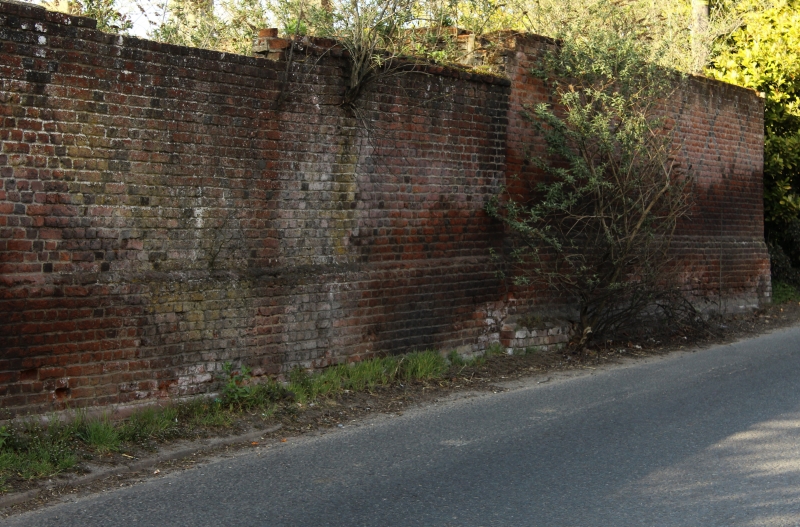 Entry Name: Walls Both Bordering the Road and Within the Site at Samsons Motorworks

Walls. c.1500. For William Barons, Bishop of London. Red brick in English bond with some burnt brick diapering. The walls rise to approx. 8 feet and both border the road and are also within the site at present occupied by Samsons Motorworks. The wall to the roadway is approximately 60 feet long and parts have diamond pattern diapering. Most has a high brick plinth. There has been some reworking to the upper courses in part and the section nearest the entrance to the site has had some careful rebuilding perhaps only to the outer face. This section is now the lower part of a late C20 workshop and its side walls project from the road gable end into the site and also have these c.1500 walls, again about 8 feet in height, as part of the walling. They extend about 16 ft on the outer wall and 14 feet on the inner wall (to a point where there is a late C20 inspection pit). These walls, which are mostly whitewashed on their inner surfaces and the outer one rendered, have some signs of recent blocking of small window openings. In line with this inner wall (broken by the inspection pit) another stretch of wall extends approx. 50 feet into the site and is the back wall of the next building. This fine piece of wall is again about 8 feet high and is of red brick with a brick plinth and some diamond pattern diapering. In the centre is a blocked Tudor-arched doorway, the whole of the brick arch surviving with the odd brick above before the weatherboarding of the C20 continuation building begins. This wall faces south west and the present back yard. All these walls survive from a long barn: see below. From the end of this wall, approx. another 50 feet north west, are the back and end walls of another workshop which forms part of the north western boundary of the site. These walls are again approx. 50 feet long and 8 feet high and the base appears again to be of c.1500, the upper part later. They survive from probably a former house, also see below.
HISTORY. This site was one of the historic manors of Hadleigh. It was owned by the Hadleighs of Hadleigh in the C14/C15, and was called Hadleigh Place, the Place and later Place Farm. Recent research has shown that it is this manor which had become the property of William Barons, Bishop of London, c.1500 and by 1505 there was further building for his will refers to 'brikestones for building his manor in Hadleigh'. The Hadleigh tithe map of 1839 delineates the site and shows that the walls to the north are those remaining from a long barn, those to the west are probably from a large house which in 1847-8 Rev. Hugh Pigot of Hadleight says was being pulled down, and also the boundary wall to Lady Lane which includes part of the walling of the former gatehouse, which was demolished in the 1930's. An early photograph in the Hadleigh Archive shows the boundary wall, the gatehouse and the barn to rear. This site is known locally as 'The Monastery'.
These walls are the surviving parts of important historic structures and the site itself is of much historical significance with the likelihood of considerable archaeological remains.
SOURCES.
Susan Andrews, pers. comm. of research contained in her newly published 'History of Hadleigh in the C16'.
The Hadleigh Society: 1839 tithe map and early photos.