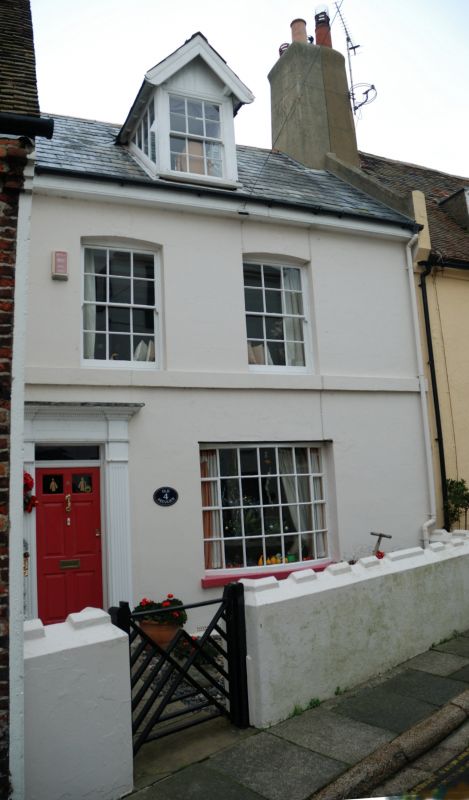 House. Front range late C17 with early C18 rear range. Refronted and mainly refenestrated in mid C19 with late C19 and C20 rear extensions. Brick, refronted in stucco with incised lines. Front slope of roof slate, rear part pegtiled with one rendered chimneystack to right side of front range and tall rendered stack to rear elevation.. Two storeys and attics; two windows to front, one to rear of earlier ranges. Plan form appears originally to have been one room on each floor with further room on each floor added by a nearly contemporary addition.
EXTERIOR: Front has platband between ground and first floors. C19 gabled dormer with six-light sash with horns. First floor has two 12-pane sashes with cambered head linings and horns. Ground floor has left side C19 doorcase with moulded cornice, pilasters, rectangular fanlight and six-panelled door and right side large later C20 Neo-Georgian style curved bay. Side elevations have gable ends with kneelers. Rear elevation has gable with one mid C19 sash with vertical glazing bar and horns to upper floors and early C19 16-pane sash to ground floor. Late C19 two storey brick kitchen and bathroom extension and further one storey later C20 kitchen extension are not of special interest.
INTERIOR: Hall has mid C19 half-glazed door with marginal glazing. Front ground floor room was probably originally used for cooking and has large brick open fireplace with wooden bressumer, chamfered with lamb's tongue stops and rectangular spice hole and spine beam with one inch chamfer with lamb's tongue stops, chamfered floor joists and wide floor boards. The thick internal wall between front and back rooms show this was originally an outside wall. The rear ground floor room in the early C18 extension was probably originally the Parlour and has a smaller curved brick fireplace wooden and a central axial beam with lambs tongue stops, exposed floor joists and wide floor boards. The staircase from ground to first floor was replaced in a different position in the late C19 and has turned balusters and moulded newel post with ball finial. The original half-winder staircase survives from first floor to attic in its original position adjoining the fireplace to the principal chamber. This room also has a brick fireplace with curved wooden bressumer and axial beam with chamfer, lambs tongue stops and plain floor joists. The rear bedroom has a smaller brick fireplace with curved bressumer but the ceiling is plastered. There is some C19 panelling at the top of the attic stairs and the roof space has lath and plaster panels.
HISTORY: A house of good quality, likely to have originally been connected with the Royal Navy rather than built as a fisherman's cottage.