Folly in the Grounds of Boughton Mount 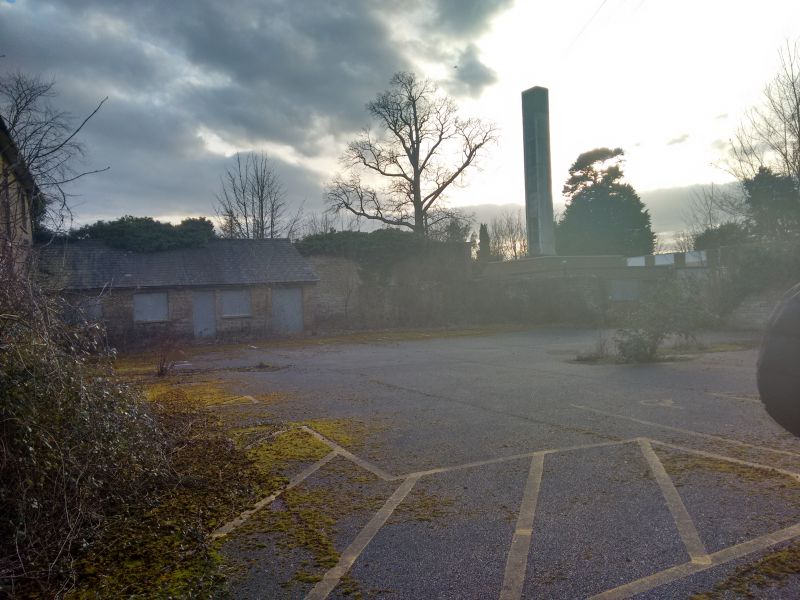 Entry Name: Folly in the Grounds of Boughton Mount

MATERIALS: it is constructed of random rubble Kentish ragstone from local quarries.

PLAN: L-shaped in plan with a higher central square tower.

EXTERIOR: the north side has a taller central section with a dogtooth cornice, a band consisting of a course of projecting stone rubble and a number of putlog holes. The east side has two pointed arched entrances which have been blocked in late C20 or early C21 brickwork. The west side has a small round-headed window opening mainly blocked in brick. The exterior was partly concealed by vegetation at the time of survey.

Volume 5 of Edward Hasted's 'The History and Topographical Survey of the County of Kent' (published in 1798) mentioned Boughton Mount, formerly called Wychden, as a seat in Boughton Monchelsea which was the property of John Alchorne of Aylesford in the reign of Queen Elizabeth. By 1798 the property was in the occupation of E. J. Foote, Esq. of the Royal Navy.

In the early C19 the estate was owned by John Braddick, who had made a fortune out of the slave trade. He was reputed to have fattened up the slaves in his cellars for sale on the London auction block. In the 1890s the estate was still owned by the Braddick family.

In 1901 the estate was bought by George Foster Clark, who had founded a Maidstone factory which manufactured custard powder. He became Mayor of Maidstone in 1916. His son Eric, an observer with the Royal Flying Corps, was killed in a plane crash on Ist January 1917. George Foster Clark declined a knighthood from Stanley Baldwin in 1925 and the family bequeathed much of their land for educational purposes, including Boughton Mount.

The main house, whether the building mentioned by Hasted or its successor on the same site, was lost in a fire shortly after the Second World War. In the 1970s a Special School and Adult Training Centre was built on the site but these buildings became disused in the first decade after the millennium.

The folly in the grounds of Boughton Mount is listed for the following principal reasons:
* Date: early C19 from map evidence;
* Architectural interest: an early C19 'Gothick' style garden building in Kentish ragstone rubble, resembling a church with a squat square tower;
* Intactness: appears substantially intact apart from bricked up entrances;
* Group value: groups with the ha-ha wall to the south;
* Historic interest: it is a surviving garden feature from Boughton Mount which was one of the principal seats of Boughton Monchelsea. Following the loss of the main house to fire after World War II it is one of the only reminders of Boughton Mount's long and interesting history and its connexion with John Braddick, a prominent local figure.