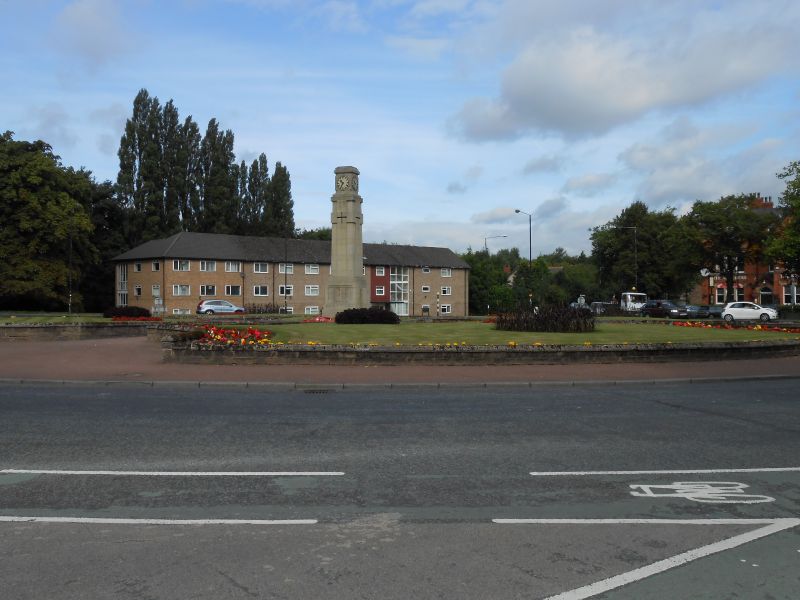 The war memorial is located on a large roundabout island to the centre of Davyhulme Circle. It consists of a tall, slender, square cenotaph with a tall base incorporating low buttresses to the north and south sides. The west face of the cenotaph's base is inscribed with the words 'ROLL OF HONOUR' and the names of 23 men (including one repeated family name) who were killed during the First World War, all set within a carved surround. Below is the inscription: 'TELL ENGLAND YE WHO PASS THIS MONUMENT,/ WE DIED FOR HER AND NOW WE REST CONTENT.'. Beneath this is a further later inscription that reads 'ALSO THOSE WHO GAVE THEIR LIVES IN THE SECOND WORLD WAR/ 1939 - 1945' and the names of 6 men killed during the Second World War. The cenotaph's shaft is carved to present a full-height cross on each face; the upper part of each cross projects further and at an angle (enabled by the shaft's taper). Each cross also contains a smaller incised, carved cross. The uppermost part of the cenotaph on all four faces has an illuminated brass clock dial glazed in opal. Below the clock dials is a carved band with relief lettering that reads in an anti-clockwise direction around the cenotaph from the west face: 'IN MEMORY OF/ THOSE WHO FELL IN/ THE GREAT WAR/ 1914 - 1918'. The east face of the cenotaph has a small timber hatch set to the centre of the shaft that provides access to the clock mechanism inside, which consists of a Graham deadbeat escapement and a nickel steel pendulum.

The Davyhulme Circle war memorial was erected in 1924 to commemorate 23 men killed during the First World War. A further 6 names were added later to commemorate those lost during the Second World War, and in 1965 the memorial was rebuilt. Every year the memorial is the focus of a remembrance parade and service attended by veterans, local organisations, the Air Training Corp, Scouts, Army Cadets and Sea Cadets.

* Historic interest: as an eloquent witness to the tragic impact of world events on this community, and the sacrifices it made in the conflicts of the C20;

* Design interest: it has a functional as well as commemorative purpose in acting as a village clock and has a simple but elegant and streamlined cenotaph design;

* Setting: the memorial's design is enhanced by its location at the centre of a large traffic island at the heart of Davyhulme surrounded by low-level landscaping that enables it to stand out as a focal point and landmark within the local area; the clock faces and carved crosses on the memorial's shaft being angled towards each oncoming road.