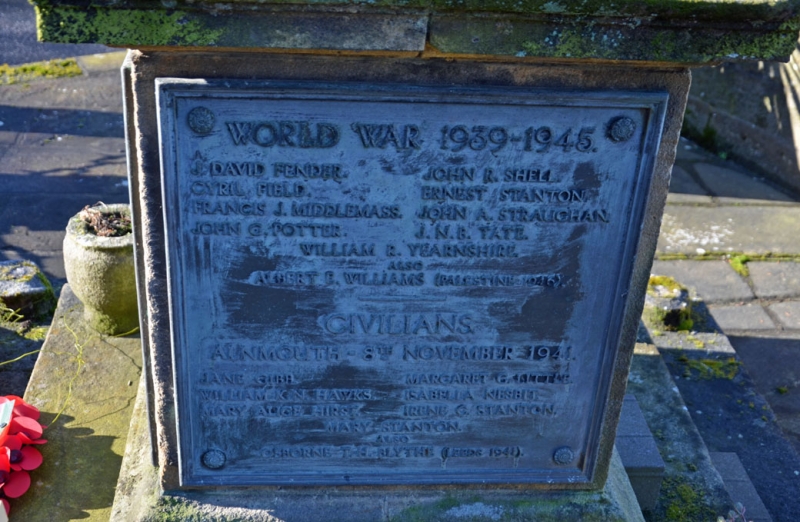 First World War Memorial with Second World War additions including civilian casualties, 1921, designed by Hicks and Charlwood and built by Carse and sons of Amble.

First World War Memorial with Second World War additions including civilian casualties, 1921, designed by Hicks and Charlwood and built by Carse and sons of Amble.

MATERIALS: sandstone memorial with an iron and glass lantern and bronze plaques.

The memorial is in the form of a gas lantern (now electric) surmounting a tapering pillar set upon a square-set pediment, the whole placed upon a three-stepped base. There is a carved wreath at the base of the pillar. The front and sides of the pedestal bear large bronze plaques; that to the front bears the main inscription and reads

Erected to the honour/ and the ever/ sacred memory of those/ who sacrificed themselves/ to achieve victory in the/ Great War 1914-1918/ and the World War 1939-1945/ See that you conquer by/ living as we conquered/ by dying.

The right side carries the 21 names of the Fallen of the First World War listed in alphabetical order by surname followed by forename. The left side carries the ten names of the Fallen of the Second World War, similarly arranged including one casualty who fell in Palestine in 1946. Below are the names of eight civilians, six women and two men, killed on the night of 8th November 1941 when a bomb was dropped on Argyll Street.

The memorial occupies part of a traffic island and stands within a raised semi-circular enclosure reached by stone steps. The enclosure is defined by a curving stone wall to the rear terminating in low stone piers with a chain fence carried on four stone bollards to the front. The interior of the enclosure has a stone-flagged base and there are several stone pots.

This List entry has been amended to add the source for War Memorials Online. This source was not used in the compilation of this List entry but is added here as a guide for further reading, 9 February 2017.

This memorial was commissioned by The Alnmouth Victory Fund and was constructed and funded by the Alnmouth Welcome Home Fund including the British Legion and public subscription at a cost of £400. It was unveiled on 24 July 1921 by Brig. Gen. B. F. Widdrington, MG, DSO of Newton Hall and was dedicated by Rev. R. W Bell of Darlington. The memorial was re-dedicated on 8 May 1949 by Rev. T Hindmarsh and unveiled by the Duchess of Northumberland; at this time the three bronze plaques were added to replace the original inscription and record of the Fallen of the First World War. Originally sited a little to the west of its present location, the memorial was re-sited to occupy part of a newly created mini-roundabout, but its form is understood to be unchanged.

In 2013 the hardstanding and surrounding bollards were re-furbished and partially replaced.

Alnmouth war memorial is listed at Grade II, for the following principal reasons:
* Historic interest: as an eloquent witness to the tragic impacts of world events on this community, and the sacrifices it has made in the conflicts of the C20;
* Design: it is an attractive, well-detailed and well-executed war memorial incorporating a former gas lantern.