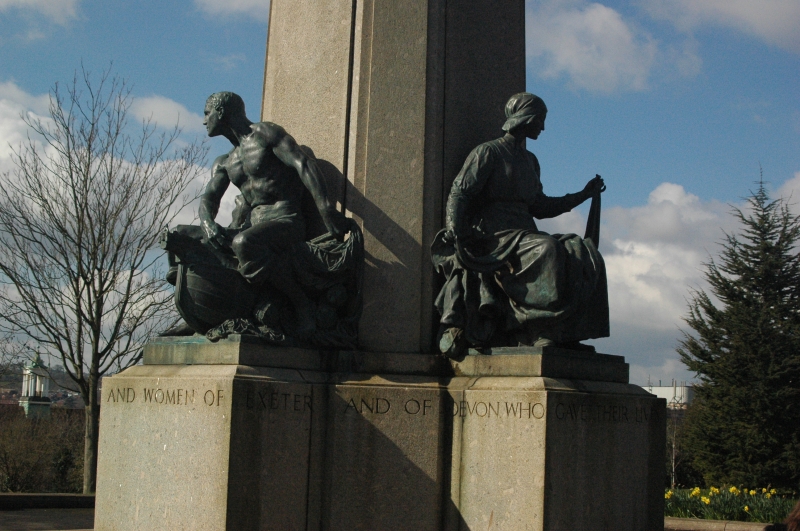 A First World War Memorial, by John Angel, commissioned in 1919 and dedicated in 1923, with a plaque added later to commemorate the Second World War.

A First World War Memorial, by John Angel, commissioned in 1919 and dedicated in 1923, with a plaque added later to commemorate the Second World War.

PLAN: the memorial stands on a square base and is enclosed by two inner and outer walls that are separated by a public footpath.

DESCRIPTION: the memorial is 9.4m high on a 6.1m high plinth. The plinth is cross shaped, with the intersections of the four arms having a chamfered finish, and is surmounted by an octagonal column. The column is topped by a 2.4m high bronze statue of NIKE, Greek goddess of Victory, who is holding up a laurel as a token of gratitude to Heaven and standing over a dragon representing the Demon of Tyranny and Wrong. The four additional figures on the plinth are THE SOLDIER at rest; THE SAILOR astride the hull of a ship with a figurehead in the form of the Exeter City Coat of Arms and motto ‘semper fidelis’; THE PRISONER OF WAR inspired by the work carried out by Lady Owen and a group of Exonians with prisoners of war in Germany; and THE VOLUNTARY AID DETACHMENT NURSE holding two bandages, and with a sheaf of corn and a shrapnel shell at her feet highlighting the work carried out by women during the First World War. At the top of the plinth is engraved: IN PROUD AND GRATEFUL MEMORY OF THE MEN AND WOMEN OF EXETER AND DEVON WHO GAVE THEIR LIVES IN THE GREAT WAR 1914 - 1919 THEIR NAME LIVETH FOR EVERMORE. The memorial includes a cavity, within which has been placed a casket bearing the names of the 970 people of Exeter who gave their lives during the First World War; these names have also been inscribed in a book which was to be kept in the city archives. A bronze plaque was added below this which reads: THIS TABLET IS DEDICATED TO THOSE WHO FELL IN THE SECOND WORLD WAR 1939 – 1945. The memorial stands on a raised square stepped base surrounded by floral beds used for seasonal planting, which are enclosed by a low stone wall with small dome-capped corner pillars. Another similar low stone wall surrounds the memorial and the public footpath around it, and includes four access points the west of which has a set of three steps.

The Exeter war memorial cost £6,000 to build. The bronze figures of the soldier, nurse and seaman were cast by the Morris Art Foundry, responsible for the justice statue above the Central Criminal Court at the Old Bailey (Grade II*). Nike and the prisoner of war were cast by A B Burton’s Thames Ditton Foundry, and casts of the statues were exhibited at The Royal Academy in 1922. The Devon granite was locally quarried and the stone for the monument erected by Messrs. Easton & Son of Northernhay Street. The dedication ceremony for the war memorial on 29 April 1923 was attended by the Bishop of Crediton Robert Trefusis and it was unveiled by the Right Honourable Admiral David Beatty.

The memorial was commissioned by Exeter City Council, and was designed and sculpted by John Angel FRBS (1881-1960), a local artist who had studied at Exeter College of Art, South London Technical School of Art and the Royal Academy of Arts, training under Sir George Frampton. He was elected to be a member of the Royal Society of Sculptors in 1919, the same year that he was commissioned to create the Exeter memorial. Angel also designed the war memorial in King Square, Bridgwater, Somerset (Grade II*), in 1924. He moved to the United States of America in 1925 where he continued to have long and successful career, primarily for his ecclesiastical craving and sculptures, as well as busts of important individuals. His work there includes most of the statuary in the Cathedral of St John the Devine, New York and carvings in Princeton University Chapel.

The memorial stands within Northernhay and Rougemont Gardens (registered Grade II), a C19 public park developed from an early C17 public walk , which includes a number of other memorials such as the Devonshire Volunteers Memorial (Grade II). It is positioned on the crest of the hill on the west side of the gardens, at the top of the walk leading down to the Northernhay Gate entrance.

The Exeter City War Memorial in Northernhay Gardens is listed at Grade II* for the following principal reasons:
* Artistic interest: the five bronze statues are of remarkable quality, set on a podium constructed of high quality shaped granite stone, and form a war memorial which is an extremely elegant and sombre commemoration to the fallen;
* Sculptor: it is the work of John Angel, an internationally-renowned sculptor, who was responsible for notable sculptures and carvings both in Britain and in the United States of America;
* Context: it stands on an elevated position within the town gardens, being placed at the top of one of the main entrances to Northernhay and Rougemount Gardens (Registered Grade II), and has become one of the principal focal points with the landscape;
* Group Value: the war memorial is one of a group of commemorative monuments, some to notable individuals and organisations, including the Devonshire Volunteer (listed Grade II); It is also just under 400m to the north of the Devon County Council War Memorial (listed Grade II*);
* Setting: the memorial stands adjacent to the C11 Rougemount Castle (a scheduled monument).