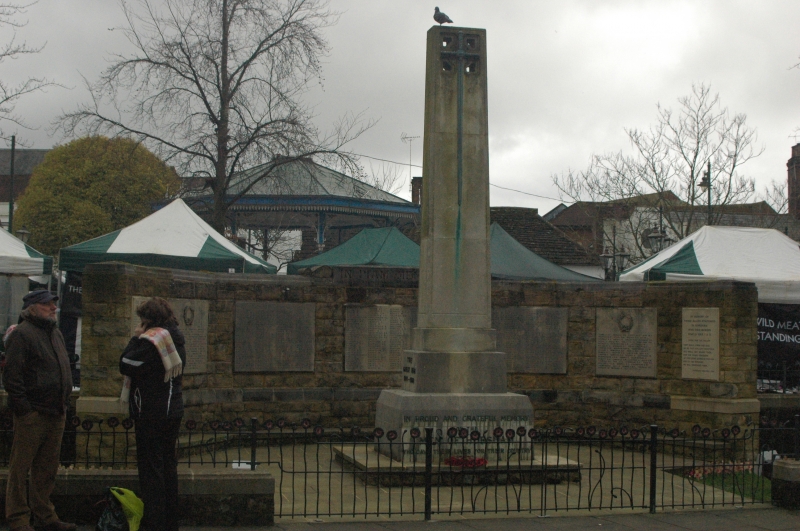 War memorial to the fallen of the First World War, designed by local architect Claude Kay and erected in 1921. Moved in the early 1990s when names of the fallen from the Second World War were added.

The memorial consists of a two-stepped base surmounted by a plinth and obelisk, with a large Runic cross incised at the top. A large bronze Crusader's sword is attached to the front west face of the obelisk pointing down. The entire assembly is 17ft high constructed from Hopton Wood stone. The lower base reads ‘IN PROUD AND GRATEFUL MEMORY OF THE MEN OF HORSHAM WHO GAVE THEIR LIVES FOR THEIR COUNTRY’. The north face contains the inscription ‘THE GREAT WAR 1914-1918’; whilst the opposite south side reads ‘THE SECOND WORLD WAR 1939-1945’.

The memorial is set within a 12m by 5m area. Behind the obelisk is a brick wall with name tablets set into it. The rest of the area around the obelisk is surrounded by a low wall with a low iron fence on top. The tops of the railings depict poppies in various stages of bloom. On the outer aspect of the rear wall there are a series of ornate metal sculptures, each showing a different theme, sculpted by Edwin Russell. A central stone block on the rear wall has carved in large letters ‘IN PIAM MEMORIAM’. All of these structures contribute to the special interest of the principal structure.

It originally had the names of 359 men, who died in the First World War inscribed on three panels around the base of the obelisk, but by 1929 the names on the panels had become worn so it was decided to inscribe the names on a separate stone wall in accordance with a plan produced by C G Atkinson.

The obelisk was moved to its present position in Carfax in the early 1990s, when the names of the soldiers, who died in the Second World War, were added. The memorial was also extended in 2010 and now includes an additional 60 names from the First World War.

Horsham War Memorial was commissioned by public subscription to commemorate the 359 local men and boys who lost their lives during the First World War.

A committee was formed on the 8 January 1919 to discuss the erection of a war memorial but the idea of a memorial to honour their dead was nothing new. It is probable that the council had had this question in mind since the end of 1914, when it was decided, with the assistance of Mr J B Morgan, who was at the time Electrical Engineer, to keep a register of all men joining the forces so that a Roll of Honour might be prepared. It was determined that a memorial in the form of an obelisk should be erected in Carfax and an appeal was launched for public subscriptions to meet the design and construction costs.

An initial design for the memorial was created by Mr Arthur Walker but because the proposed design was so expensive it was dropped and the council asked for something simpler. The chosen local architect was Claude Kay who would later team up with Lt. Col Godman to design locally the original Capitol Theatre and Drill Hall.

The unveiling was by Major General J C Young, Colonel of the County Regiment, the Royal Sussex, and dedicated by Revd Morley Headlam on 13 November 1921. It was originally situated below the bandstand in the direction of Market Square but was moved to its present position in Carfax in the early 1990s, when the names of the soldiers who died in the Second World War were added.

In 2010 the War Memorial was re-dedicated following the extension of the memorial wall with new plaques bearing 60 additional names from the First World War. There is currently (2014) an intention to add the missing names of those who died from the Second World War to the memorial.

Horsham Carfax War Memorial, unveiled in 1921, is listed at Grade II for the following principal reasons:

* Historic interest: as an eloquent witness to the tragic impact of world events on this community, and the sacrifices it has made in the conflicts of the C20;
* Design: as a simple but elegant and well-proportioned Hopton Wood stone obelisk 17ft in height with a runic design open cross at the top. A bronze Crusader's downward-facing sword is superimposed to the front;
* Context: occupying a prominent position within Horsham town centre and conservation area and with numerous listed buildings nearby, including the bandstand (listed in 1974 at Grade II) and a number of buildings within the historic centre of Carfax.