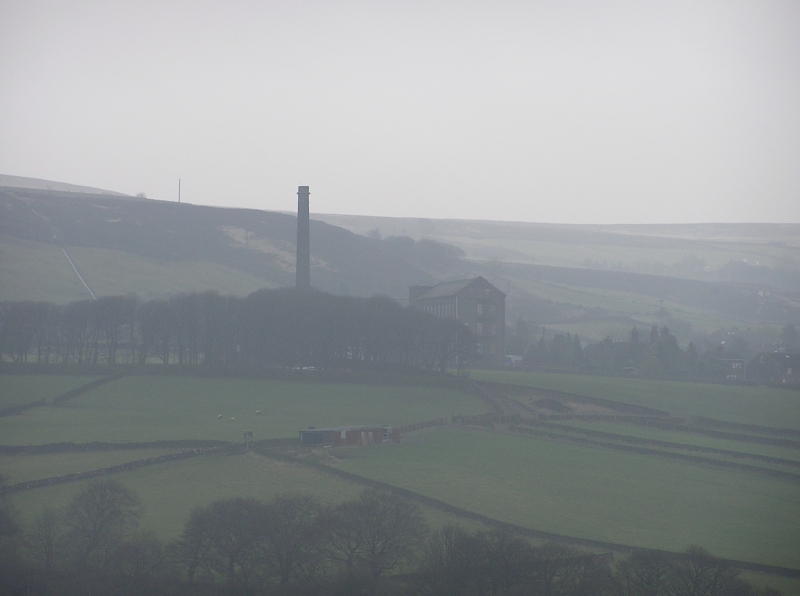 Old Town Mill is a former worsted mill of 1851 and later, with spinning mill, warehouse, boiler and engine rooms, chimney and north light sheds, constructed of stone with slate roofs and now in various uses.

MATERIALS: the mill is constructed of coursed squared gritstone with some ashlar dressings, and with slate and some corrugated metal roofs.

PLAN: the mill buildings are largely grouped around a narrow cobbled courtyard on the south-west side of Old Town Mill Lane which runs from north-west to south-east. A large two storey mill range (1851) runs south-east to north-west parallel with Old Town Mill Lane, with its gable end facing two smaller buildings across the courtyard and running back from the road. Alongside the mill building to the south-west is a stair tower which adjoins a multi-storey warehouse aligned south-west to north-east, forming the end of the courtyard. A boiler house lies on the north-west side of the mill with the chimney to the rear, and a small series of ruinous north-lights sheds is situated between the mill building and the warehouse.

EXTERIOR: 1851 mill range: the building has two storeys plus attic floor and is ten bays long by seven wide. The windows are tall with six panes and ashlar dressings. There is a sill band at first floor level and a modillion eaves cornice with kneelers and gable copings. The roof has skylights on its north-east side. At the north end of the north-east elevation is an altered ground floor vehicle entrance with a round arch window above lighting an integral engine shed. The south-east gable end has a central line of taking-in doors, with three windows to each side on the first floor and two smaller windows to each side on the attic floor. The ground floor has three windows to the right and one to the left beyond an altered, partly blocked entrance. The north-west end is continuous with the boiler house, with five attic floor windows visible above. The south-west elevation adjoins the ruinous north-lights sheds. Linking the mill range to the southern range is a pair of wrought iron gates, with 'Mitchell Brothers' across the top band and 'Old Town' across the middle, attached to stone gate piers.

Boiler house: the building has a hipped roof and is a single bay wide. The ground floor has a vehicle entrance to the north-east with a single window above. To the north-west side is a first floor entrance accessed from an external stone stair with an iron handrail, and two further windows. To the rear is the cylindrical stone chimney stack with a moulded crown and a date stone of 1890.

Warehouse: this has four storeys plus attics and is ten bays long. Many of the windows are partly blocked; all are tall and originally had six panes. The south-west gable end has a central line of taking in doors, converted to windows, and partly and wholly blocked windows to either side. The taking in doors have iron balconies on the upper three storeys. The north-east gable end also has taking in doors offset from the centre, with a hoist above. There is a line of windows to the left. The right side is hidden by the adjacent stair tower. A date stone on the wall reads 1889.

Stair tower: the stair tower has a pyramidal roof that rises above the other buildings, and a date stone over the door reading 'Old Town Mill: M.Bros: A.D. 1881'. The entrance on the south-east side is to the right, and has a double timber door with an overlight and ashlar surround. Four round arched windows with ashlar surrounds are staggered, following the line of the stair, to the third floor where three smaller round-arched windows lie in a line.

South-west range: the range is in two sections, both two storey but with the south-western part higher than the south-eastern. The taller, south-western building has three tall ground floor windows on its south-east elevation, and three smaller ones above. The north-west elevation is partly rendered and has a wide vehicle entrance with sliding doors. On the first floor is a continuous run of windows, set back from the main façade. There is a single window in each gable end and an end stack to the north-east gable. The south-eastern building has a hipped roof to the south-east and a central entrance with a window above in the south-east elevation. The south-west elevation has two windows to each floor, one of the lower ones blocked, and a doorway with one window on the ground floor and two windows above on the first floor on the north-west elevation. The lower floor of the building is constructed of massive stone blocks, possibly indicating an earlier build.

North-light sheds: the sheds are ruinous with only remnants of roofing remaining. A later breeze-block building with a corrugated metal roof is attached to their northern side, obscuring their exterior.

INTERIOR: 1851 mill range: the ground floor has a double row of cast iron columns with bolting heads for line shafting, joined at the top by a cast iron beam. There are numerous modern partitions: these are not of special interest.* The first floor has similar columns with a surviving pulley and section of drive shaft. The attic floor was not inspected. The engine house at the north-west end on the building is separated from the mill by a stone wall, with the entry of the drive shaft visible in the internal wall. A blocked archway adjoins the boiler house to the north-west.

Boiler house: the boiler house has two storeys, with the upper floor possibly a former workshop or drying house.

Warehouse: the interior shows no evidence of a power source but a steel framed winding mechanism for a hoist survives on the top floor. The roof structure has heavy cross beams but appears otherwise of light construction.

Stair tower: the tower gives access to both the two-storey mill and the warehouse. The heavily worn stone stairs run around a central lift with metal grille doors.

South west range: the taller building, in use as a workshop, is open to the first floor. The interior of the building was not inspected.

* Pursuant to s.1 (5A) of the Planning (Listed Buildings and Conservation Areas) Act 1990 (‘the Act’) it is declared that these aforementioned features (modern partitions in the 1851 mill range) are not of special architectural or historic interest.

Pursuant to s.1 (5A) of the Planning (Listed Buildings and Conservation Areas) Act 1990 (‘the Act’), the later building attached to the rear of the north light sheds is not of special interest and is not to be treated as part of the listed building for the purposes of the Act.

Athough this mill is not shown on the O.S. 1:10560 map published in 1852-4 (probably surveyed at an earlier date), there is a datestone of 1851 on the earliest block over the boiler house entrance. The site was previously open ground. The mill was extended in the 1890s for Mitchell Brothers, woollen manufacturers, and is marked as a worsted mill on the O.S. 1:2500 map published in 1894-5. There are further date stones of 1881 and 1889 on other parts. The mill was bought by the current owners in the 1950s and was still named as a mill in 2013. It is now in multiple use with some parts unused.

Old Town Mill, Hebden Bridge, a former worsted mill of 1851 and later, constructed of stone with slate roofs, is designated for the following principal reasons:

* Industrial context: Old Town Mill is a good example of a small integrated textile mill of the mid and late C19, representing part of the development of the nationally important woollen textile industry of West Yorkshire;

* Architectural interest: the earliest building on the site is well constructed with some architectural detailing, and the buildings as a whole form a coherent group, clearly reflecting their original functions despite the poor condition of some elements;

* Historic interest: the setting of the mill among surviving older buildings that appear to have been associated with an earlier, domestic phase of the textile industry, is unusual and adds to the historic interest;

* Group value: the group of listed buildings alongside the mill are functionally associated and are a rare manifestation in physical form of the historic development of the woollen industry of West Yorkshire.