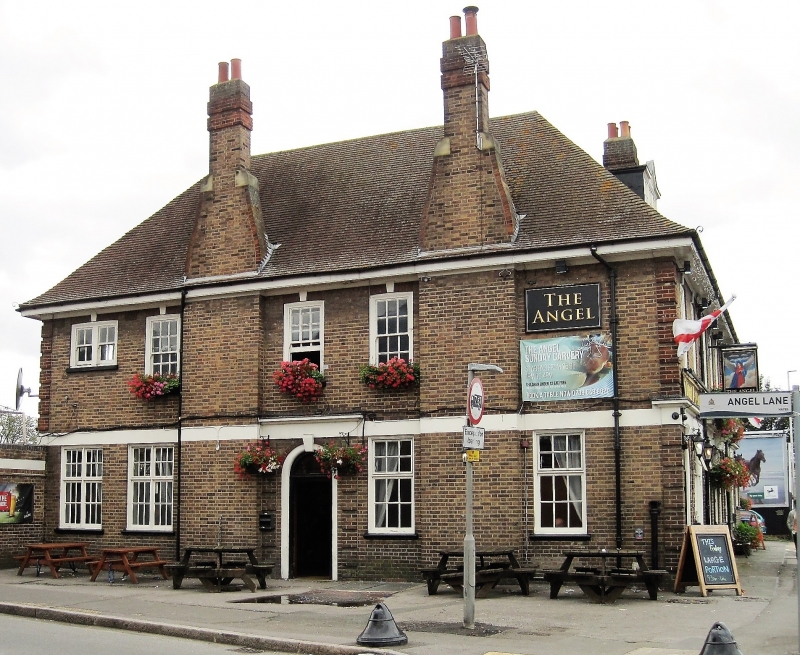 PLAN: the building is roughly square on plan and occupies a corner plot where Angel Lane meets the main Uxbridge Road. The internal arrangements are little altered. The public area on the ground floor comprises five separate rooms, each with its own entrance. These will be referred to below by their original designations, as shown on the architect's drawings. At the front (north) are the saloon bar and public bar, separated by the narrow off-sales room; behind are the meal room and luncheon room, with the manager’s office and hallway between. To the south-east is a free-standing toilet block, originally roofless and entered directly from the street, but later joined to the meal room via a short corridor. On the west side is a lean-to section comprising a bottle store, entrance porch and toilets; this originally continued to the south and east as an open verandah, but the space was absorbed into the luncheon room when the latter was extended in 1937 and c.1970. A central counter serves all five public rooms. On the first floor, above the public bar, is the so-called Masons’ Room, used for many years by the local Masonic lodge; also on this level are the former kitchen, scullery and larder. The attic floor contains domestic accommodation.

EXTERIOR: the style is an Arts and Crafts-inflected neo-Georgian. The main north elevation to the Uxbridge Road is of seven bays arranged 2-3-2. Projecting brick quoins mark the corners and frame the centrepiece. The ground floor has Crittall casement windows and three round-arched doorways; that in the centre leads to the former off-sales room and is flanked by what were once display windows. (The pub sign and bracket*, carriage lamps*, fascias* and awnings* are not original, and are not of special interest.) The first-floor windows, above a plain painted storey-band, are six-over-six-pane timber sashes with flat-arched keystone surrounds; over the central doorway is a small semicircular balcony. The steep-pitched hipped roof has boarded and sprocketed eaves, and contains two pedimented dormers flanking a square central stack. The more informal east elevation to Angel Lane is dominated by two broad chimney-breasts, which rise through the eaves into tall battered stacks. On the west side, facing the yard, is a hip-roofed lean-to containing bottle store and toilets; its right-hand portion, originally an open verandah, was rebuilt c.1970 as a flat-roofed extension* (not of special interest).

INTERIORS: apart from the extensions to the luncheon room, these are little altered. Common features include beamed ceilings – typical of Nowell Parr’s interiors – and dado panelling formed of close-set vertical studs with a crenellated top rail. The SALOON BAR retains its original glazed entrance lobby, curved counter with panelled front, and a large brick fireplace, now painted, with tilework decoration. The counter is notable in having outward-opening hatches to give access to the pipes and beer engines, a feature apparently peculiar to pubs in the London area. To the east is the OFF-SALES ROOM, a narrow compartment accessible only from the street and from behind the bar. Beyond is the PUBLIC BAR, again with its glazed entrance lobby, curved counter with hinged doors (the canopy* above is an insertion of c.1970 and is not of special interest), and fire surround – the latter of cast iron grained to imitate hardwood. The MEAL ROOM to the south has a blocked fireplace and a service hatch, also blocked, in the west wall. (The bar counter* and canopy* here are insertions of c.1970 and are not of special interest). The LUNCHEON ROOM, as noted above, has been extended southwards on two occasions to create a large function area. It has fielded dado panelling (partly original), a grained cast-iron fireplace (ditto), a canted bar counter with hinged doors, and an Art Deco coloured glass skylight (both probably of 1937).

The central SERVERY retains much of its original bar-back (including a mirrored section of 1937 facing the luncheon room), under-bar shelving and a glazed timber screen between the saloon bar and the off-sales room. The MANAGER’S OFFICE has a glazed door and a series of windows overlooking the bars, including a special cashier’s window through which cash was passed back to be placed in the safe (also still in situ). The rear CORRIDOR is connected via steps and a dumb-waiter with the cellar below and the former kitchen above.

The brick-lined CELLAR dates partly from the earlier building, and contains two beer-drops and a bottle hoist (respectively, for lowering barrels down from the street and raising crates of bottles up to the servery). The main stair, with stick balusters and square newels, leads up to the upper floors. The rooms here have simple four-panel doors in moulded timber surrounds. The MASONS’ ROOM, on the first floor, has an Art Deco ceramic fireplace as well as various items of furniture (moveable and hence not included in the listing) relating to its former Masonic use. The former KITCHEN has built-in cupboards, a drying hoist and a large sideboard. Some of the attic BEDROOMS contain fireplaces with decorative iron surrounds.

* Pursuant to s.1 (5A) of the Planning (Listed Buildings and Conservation Areas) Act 1990 (‘the Act’) it is declared that the abovementioned features (the pub sign and bracket, carriage lamps, fascias and awnings on the main elevation, the canopy in the public bar, the canopy and counter in the meal room and the c.1970 extension to the luncheon room) are not of special architectural or historic interest.

The Angel Inn once stood within the hamlet of Hayes End, which lay north-west of Hayes village alongside the Uxbridge Road. The latter formed part of the old main route from London to Oxford, and the Angel probably originated as a coaching inn. Road-widening during the early C20 - when Hayes was becoming absorbed into the outer metropolitan suburbs - removed most of the original hamlet, but the Angel survived, and was rebuilt on its original site by Fuller's brewery in 1926. The new building, designed by TH Nowell Parr, was a model of the 'improved' inter-war public house, whereby brewers sought to appeal to a more 'respectable' clientèle by providing a wider range of services including separate lounge bars and dining areas. Nowell Parr’s building was extended in 1937, with the former verandah incorporated into the luncheon room, and again c.1970, but otherwise remains much as built.

Thomas Henry Nowell Parr (1864-1933) was born in Birmingham and articled to the local firm of Dunn and Hipkiss before becoming an assistant in the Walsall Corporation Architect's Department. In 1894 he went to work for Brentford Urban District Council, for whom he designed a number of civic buildings including the public baths (1895-6) and library (1904-5). In independent practice from 1900, he is best known for his numerous west London pubs and hotels, whose quiet Arts and Crafts detailing marks a reaction against the showy opulence of the late-Victorian 'gin palace'. Examples of his work include the Old Pack Horse at Chiswick (1910), the Three Horseshoes at Southall (1914-22) and the Kent Hotel, now the Duke of Kent, at Ealing (1929).

The Angel PH at Hayes, of 1926 by TH Nowell Parr with later extensions, is listed at Grade II for the following principal reasons:

* Architectural quality: a subtly distinguished, Arts and Crafts-influenced design by one of the leading pub architects of the early/mid-C20;

* Planning interest: the compartmental plan marks the diversification and careful separation of functions typical of the 'improved' or 'reformed' public house;

* Intactness: the building is very well preserved both within and without, with the original 1920s interior - including rare features like the off-sales compartment and manager's office - surviving exceptionally well.