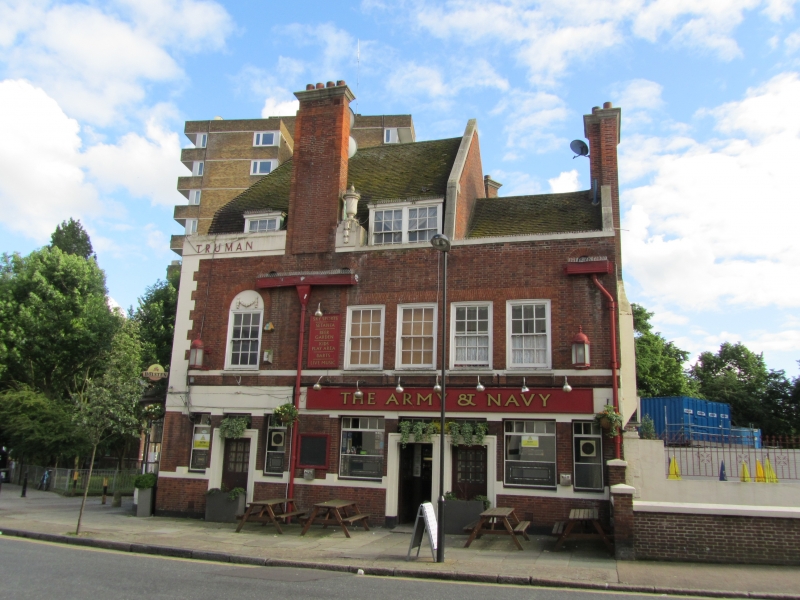 PLAN: wedge-shaped in plan, almost symmetrical, of two main storeys, attic and cellar. Internally it was probably originally divided into five different sections, a saloon bar, private bar and off sales accessed from Matthias Road, a public bar, and possibly a games room accessed from Elton Street, all served by a single servery. The room divisions were removed in the later C20 but are still apparent in the ceiling divisions.

EXTERIOR: the central corner bay is framed by stone quoins and a stepped parapet with a stone tablet bearing a relief roundel with Truman's eagle symbol and raised lettering 'THE ARMY AND NAVY'. There is a six-over-six sash window with a stone keystone on the first floor and the ground floor has a bowed multi-pane off license window. The two splayed side elevations are almost symmetrical but is a bay longer on the south-east side than the north. At first floor level, adjoining the central corner bay, each side elevation has a single sash window with an arched tympanum decorated by a carved festoon, and the parapet above has the lettering of the brewery company. Beyond are a succession of plainer six-over-six sash windows - five on the south-east and four on the north side - divided from the enriched window by substantial lead rainwater heads with decorative foliage patterns and down pipes beneath the large chimneystacks. Both elevations feature further rainwater heads and down pipes at their outer ends and two fixed iron lanterns.

The attic level extends two-thirds along each of the side elevations and includes flat roofed dormers. At the base of the chimneystacks at parapet level are sculpted stone urns with carved festoons.

At ground level on the north side are three doorways with stone surrounds, originally leading to a separate off licence, private bar and saloon bar. Windows are steel-framed with hopper openings at the top and incorporate Truman's stained and leaded glazing below.

The former saloon bar retains three-quarter height fielded panelling to the south and west walls. On the west wall is a brick fireplace with a plastered panel depicting a galleon and above an original Truman's embossed mirror. Original fixed benches are on the north and west walls. The south wall has an unusual fixed fold-out counter top next to the servery and a dumb waiter beside it. Above the entrances to the lavatories are early box light signage.

Part of the timber partition between the saloon bar and private bar survives and also part of the original screen in the later vestibule entrance along Matthias Road. The former private bar retains its original counter with fielded panelled front and a brick fireplace with curved hearth.

The former public bar has further fixed benching, simple match board panelling to the bar, a brick fireplace with a curved hearth and on the north end of the room is a set of rolling-in doors for lowering barrels down to the cellar. The south-west end has a further brick fireplace and is likely to have been a separate area, possibly a games room, judging by the break in the Vitrolite ceiling. Above the entrances to the lavatories are early box light signage.

Linking all the ground floor rooms is the central servery. The bar back is original throughout retaining Truman's distinctive inlaid lettering above the shelving and a leaded mirrored back board. The counter is original, though parts of the counter top have either been retouched or possibly replaced. A glass shelf with decorative wrought ironwork with small rose emblems is either original or of the 1950s. The small wash-up compartment on the public bar side of the servery is a rare survival of these fittings.

Inter-war 'improved or 'reformed ' pubs stemmed from a desire to cut back on the amount of drunkenness associated with conventional Victorian and Edward in public houses. Licensing magistrates and breweries combined to improve the facilities and reputation of the building type. Improved pubs were generally more spacious than their predecessors, often with restaurant facilities, function rooms and gardens, and consciously appealed to families and to a mix of incomes and classes. Central, island serveries with counters opening onto several bar areas allowed the monitoring of customers and also the efficient distribution of staff to whichever area needed service. Many, although not all of the new pubs were built as an accompaniment to new suburban development around cities, and a policy of 'fewer and better' was followed by magistrates both in town and on the outskirts. A license might be granted for a new establishment on surrender of one or more licenses for smaller urban premises. Approximately 1,000 new pubs were built in the 1920s - the vast majority of them on 'improved' lines - and almost 2,000 in the period 1935-39. Neo-Tudor and Neo-Georgian were the favoured styles, although others began to appear at the end of the period.

The Army and Navy Public House is situated on a prominent acute angled corner site at the junction of Matthias Road and Elton Street. A public house of the same name on the site is recorded in property deeds dating from 1844 and is shown on the 1870 Ordnance Survey map adjoining terraced houses on both sides, and again on subsequent editions of 1896 and 1915. By the 1936 Ordnance Survey map the current Army and Navy Public House is shown, occupying almost the same footprint as the earlier building but a terraced house which adjoined the pub on its west side had been demolished to provide a slight enlargement.

The new public house was built by the east London brewers, Truman, Hanbury, Buxton & Co Ltd probably in the early to mid 1930s and although no original plans or drawings are known to survive it is likely on stylistic grounds to have been designed by the brewery's principal architect, A E Sewell. A photograph dated March 1938 shows that the public house has survived largely unchanged externally. After the Second World War the adjoining terraced houses were demolished, a car park was added to the west of the site circa 1967 with a boundary wall and in 2005 this area was converted into a beer garden with children's play area.

The Army and Navy Public House, a Neo-Georgian style public house for Truman, Hanbury, Buxton and Co Ltd, opened by 1936 and probably designed by their house architect A E Sewell, is listed at Grade II for the following principal reasons:
* Architectural interest: a successful composition on a wedge-shaped site with an inventive use of the Neo-Georgian style, in good quality materials with good decorative features, including a prominent and unusual off sales window;
* Interiors: includes Vitrolite ceilings to the whole of the ground floor, panelling to the former saloon bar, four brick fireplaces, a number of built in settles, bar counters and bar shelving;
* Rarity: Vitrolite ceilings were only found in Truman's pubs and this is one of only three examples nationally in a national project. Other features, such as off sales windows, wash up facilities and fold up tables, only rarely survive and are found here also;
* Degree of survival: the exterior is intact apart from the cornice to the off sales window and the interior is intact apart from the bar divisions;
* Exemplar: a good example of Truman's reformed smaller-scale urban pubs built in the inter-war years for a predominantly working class clientele.