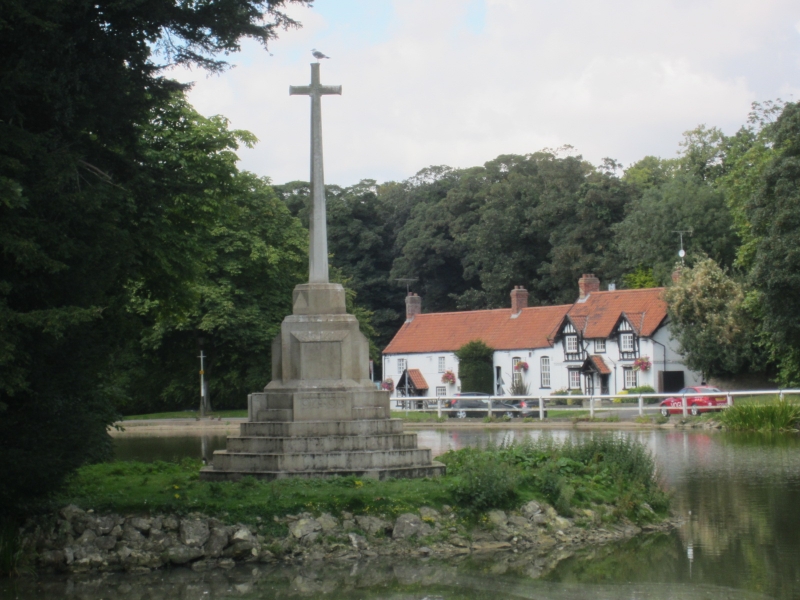 This List entry has been amended to add the source for War Memorials Online. This source was not used in the compilation of this List entry but is added here as a guide for further reading, 1 February 2017.

After the First World War £641 was raised by public subscription to construct a memorial to commemorate the seven men from the village of Bishop Burton who had lost their lives participating in the War. The memorial took the form of a war memorial designed by Messrs Temple Moore & Moore and also a tablet set within the church of All Saints (Grade II*), carved by Joseph Armitage, a carver of some note. The war memorial, built by J Peers and Sons, was placed in a prominent position on a small peninsula on the south side of the village pond, known as The Mere, where it reflected in the water and could be seen from the main road (A1079) which bounded the north side. It was unveiled and dedicated on 16 October 1922 in a ceremony attended by Lord Nunburnholme and the Archbishop of York.

Bishop Burton War Memorial of 1922 by Messrs Temple Moore & Moore is listed at Grade II for the following principal reasons:
* Historic interest: as an eloquent witness to the tragic impacts of world events on this community, and the sacrifices it made in the conflicts of the C20;
* Design: designed in sandstone ashlar by well-regarded architects’ practice Messrs Temple Moore & Moore as a dignified, tall Latin cross on a plinth and stepped base and set on a peninsula to the village pond known as The Mere where it reflected evocatively in the water;
* Group value: the war memorial has a functional group value with the contemporary tablet carved by Joseph Armitage recording the men’s names, ranks, and military units in the nearby church of All Saints (Grade II*).