The Symbol of Discovery 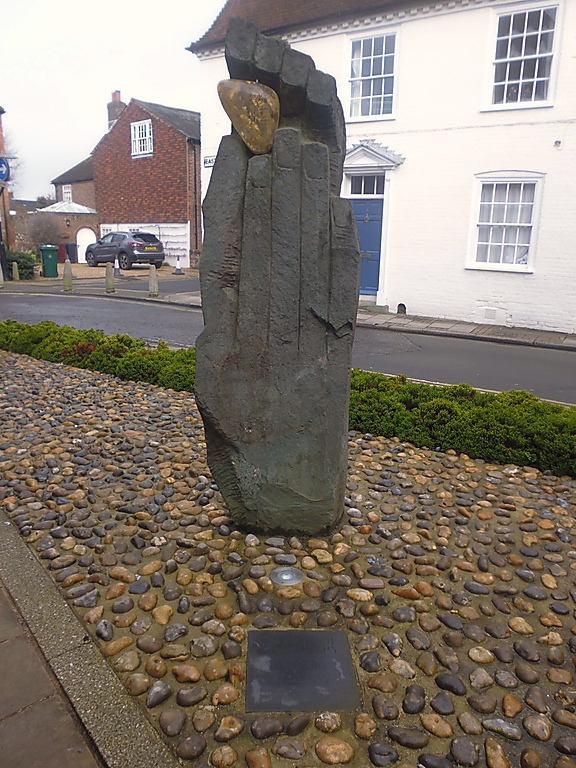 Entry Name: The Symbol of Discovery

The Symbol of Discovery, a sculpture of 1963 by the artist John Skelton.

The Symbol of Discovery, 1963 by John Skelton.

DESCRIPTION: the sculpture is formed of a single block of stone, c 2m high and is mounted directly on the ground, which is laid with cobbles, appearing to rise from them, creating a strong material relationship between the sculpture, the cobbled surface (not included in the listing) and the materials in the surrounding buildings. It depicts a pair of hands cradling a precious, man-made, jewel-like pebble. The hands emerge from rough-hewn stone, in which the fingers and finger nails are incised, following the structure of the slate. The fingers of the upper hand are crooked over the pebble and the lower upright hand supports the pebble.

An explanatory plaque set into the cobbles, made of blue slate and inscribed by Skelton reads: SYMBOL OF / DISCOVERY / WESTMORLAND SLATE / JOHN SKELTON / UNVEILED IN 1963 BY SIR CHARLES WHEELER PRA / MUSEUMS PRESENT TO THE WORLD THE PRECIOUS OFFERINGS OF THE EARTH JS.

The period after 1945 saw a shift from commemorative sculpture and architectural enrichment to the idea of public sculpture as a primarily aesthetic contribution to the public realm. Sculpture was commissioned for new housing, schools, universities and civic set pieces, with the counties of Hertfordshire, London and Leicestershire leading the way in public patronage. Thus public sculpture could be an emblem of civic renewal and social progress. By the late C20 however, patronage was more diverse and included corporate commissions and Arts Council-funded community art. The ideology of enhancing the public realm through art continued, but with divergent means and motivation.

Visual languages ranged from the abstraction of Victor Pasmore and Phillip King to the figurative approach of Elisabeth Frink and Peter Laszlo Peri, via those such as Lynn Chadwick and Barbara Hepworth who bridged the abstract/representational divide. The post-war decades are characterised by the exploitation of new – often industrial – materials and techniques including new welding and casting techniques, plastics and concrete , while kinetic sculpture and ‘ready mades’ (using found objects) demonstrate an interest in composite forms.

John Skelton (1923-1999) was born in Glasgow and trained at Coventry School of Art before a brief apprenticeship in 1940 to his uncle Eric Gill, his early work showing a close resemblance, before training with the carver Joseph Cribb. After the Second World War he joined the stoneyard studios of Percival Bridgeman of Lewes, Sussex setting up his own studio in nearby Burgess Hill in 1950. He held his first one-man exhibition at Chichester Museum in 1963, and exhibited in Britain and abroad.

Alongside commissioned work, much of it for inscriptions and memorials, he ‘divided the rest of his work between pieces "done to satisfy an interest in a particular form”, usually inspired by an individual piece of stone or wood, and those "motivated by an interest in a theme".’ (Observer, 6 Dec 1999). He also received a number of church commissions, his work showing a deep understanding of the human dimensions of Christianity. Within Chichester, works include the font for the Cathedral (1983), the sculptures 'Helping Hand of Justice' within the courtyard of Chichester Law Courts (1973) and 'Axis Mundi' at Bishop Otter College, Chichester (1990). Elsewhere, there are works in the cathedrals at Norwich, Portsmouth, Lincoln and Hereford, and at Christ Church, Coventry and secular works in Horsham, West Sussex and the Shakespeare Centre, Stratford-upon-Avon. He was made a Fellow of the Royal Society of British Sculptors in 1963 and awarded an MBE in 1989.

The Symbol of Discovery was made specifically for this site in 1963, when the space in which its stands was created as part of a restoration project for the area which saw the conversion of the adjacent, redundant buildings to a museum. It was commissioned by the architect Stanley Roth who bought the buildings. It was unveiled by the sculptor Sir Charles Wheeler to celebrate the opening of the museum and helped to place the project in the town, adding distinction to the new space, which draws inspiration from similarly scaled older squares in the city.

The sculpture reflects the concept of the nearby museum as guardian and place of discovery and learning. It is constructed round the idea of a 'fragment', the form of the work has its roots in the discovery of antique remains, representing in the Romantic period a symbol of loss. (PMSA, Sussex, 2014, 117)

The Symbol of Discovery, a sculpture of 1963 by the artist John Skelton, is listed at Grade II for the following principal reasons:

* Artistic and aesthetic interest: a powerful evocation in stone of protective hands, reminiscent of the work of Eric Gill, reflecting the concept of the nearby museum as guardian and place of discovery and learning;

* Historic interest and contribution to the public realm: commissioned to mark the opening of the new museum in 1963, placing the project in the town and adding distinction to the new public space;

* Group value: the sculpture forms the focus of the cobbled, open space, which is lined with listed buildings.