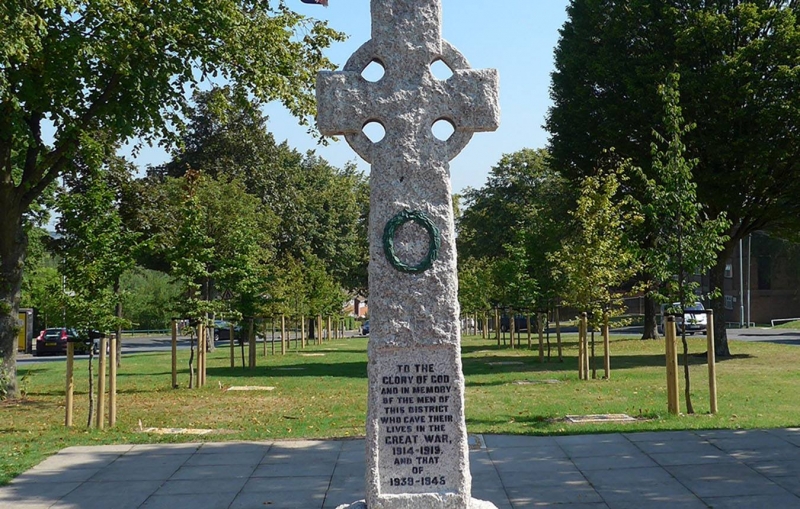 The memorial stands in a paved area to the south of the Avenue of Memory. It comprises a rough-hewn granite Celtic cross with a tall shaft set on a tapering plinth. The southern face of the shaft is decorated with a small wreath, painted green, and at its foot bears an inscription in black painted letters reading TO THE/ GLORY OF GOD/ AND IN MEMORY/ OF THE MEN OF/ THIS DISTRICT/ WHO GAVE THEIR/ LIVES IN THE/ GREAT WAR,/ 1914-1919,/ AND THAT/ OF/ 1939-1945. The southern, western and eastern faces of the plinth bear the names of the fallen in black lead letters.

This List entry has been amended to add the source for War Memorials Online. This source was not used in the compilation of this List entry but is added here as a guide for further reading, 5 October 2017.

Bartley Green War Memorial was unveiled on 11 July 1920 (erected through public donations). The memorial was dedicated by the Right Reverend JH Wakefield, Lord Bishop of Birmingham. The memorial stood originally in the churchyard on the corner of Field Lane and Genners Lane. When the church was relocated in 1964 the memorial was also moved c400m to its present location. In June 2005 the memorial cross was renovated: the paving was added. Two names were added to the memorial in 2008. Further paving was laid in 2011 and a flagpole erected in 2012.

An avenue of trees to the north of the memorial was planted in 2013, and a plaque set into the lawn in front of each sapling. This Avenue of Memory, commemorating the 19 local men who died in the First World War, was dedicated in July 2014 by Councillor John Lines, former Lord Mayor of Birmingham.

Bartley Green War Memorial, which stands on the green at the junction of Romsley Road and Field Lane, is listed at Grade II for the following principal reasons:
* Historic interest: as an eloquent witness to the tragic impact of world events on this local community, and the sacrifice it has made in the conflicts of the C20;
* Architectural interest: a simple yet dignified granite Celtic cross.