War memorial cross at the Church of All Saints, King's Heath 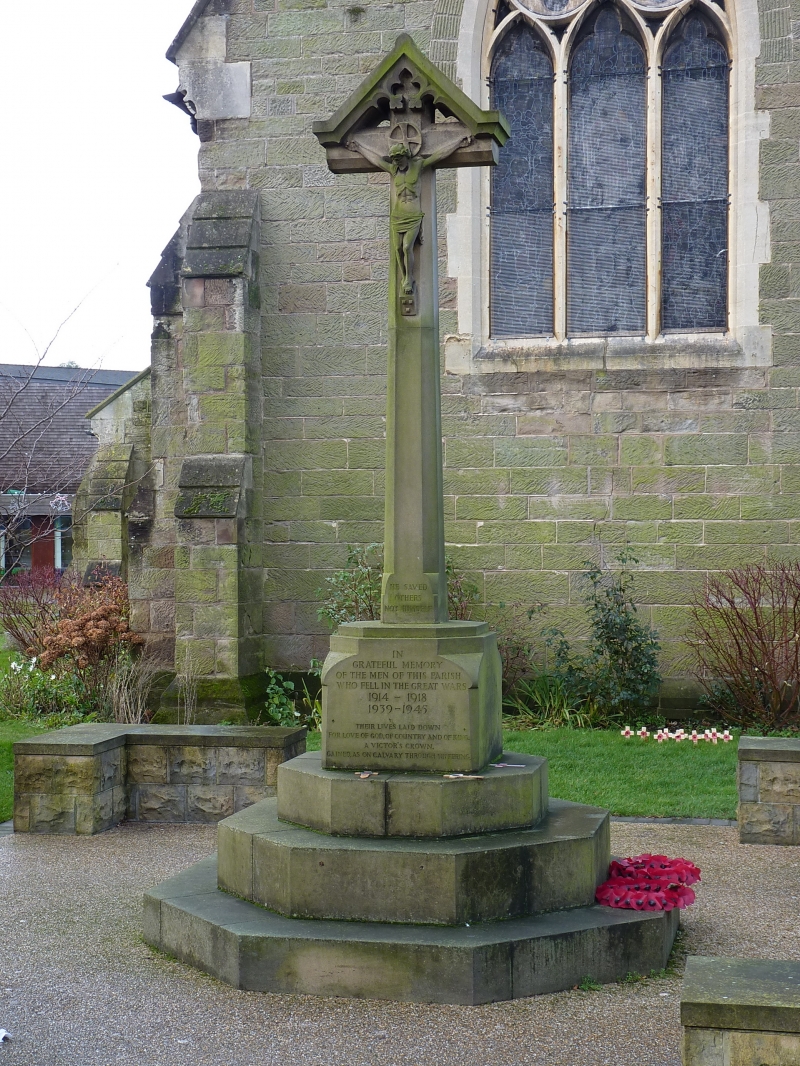 Entry Name: War memorial cross at the Church of All Saints, King's Heath

The memorial stands in the small square to the east end of the Anglican Church of All Saints (Grade II), close to the High Street. It comprises a Calvary cross in Bromsgrove sandstone with a sculpted figure of Christ crucified under a canopy, raised on an octagonal shaft. The inscription HE SAVED/ OTHERS/ NOT HIMSELF is inscribed on the front face of the foot of the cross shaft. The shaft stands on a square plinth with moulded shoulders, which stands on a base of three octagonal steps.

The front face of the plinth bears an incised inscription reading IN/ GRATEFUL MEMORY/ OF THE MEN OF THIS PARISH/ WHO FELL IN THE GREAT WARS/ 1914 - 1918/ 1939 - 1945/ THEIR LIVES LAID DOWN/ FOR LOVE OF GOD, OF COUNTRY AND OF KING,/ A VICTOR'S CROWN/ GAINED AS ON CALVARY THROUGH SUFFERING.

This List entry has been amended to add the source for War Memorials Online. This source was not used in the compilation of this List entry but is added here as a guide for further reading, 18 January 2017.

The memorial was created by Messrs J White and Sons, who were also responsible for several other war memorials in the West Midlands, including those at Pelsall, Shirley, and the Cyclists’ Obelisk at Meriden (Grade II). It was unveiled on 12 November 1921. The Second World War inscription was added in 1947. In 2011 the memorial was moved out of the churchyard and was re-erected to the east of the church in the village square, as part of a village squares project.

The war memorial at the Church of All Saints, King’s Heath, which stands in the village square, is listed at Grade II for the following principal reasons:
* Historic interest: as an eloquent witness to the tragic impact of world events on this local community, and the sacrifice it has made in the conflicts of the C20;
* Architectural interest: a simple yet eloquent Calvary cross by a noted company of monumental masons;
* Group value: with the Anglican Church of All Saints (Grade II-listed).