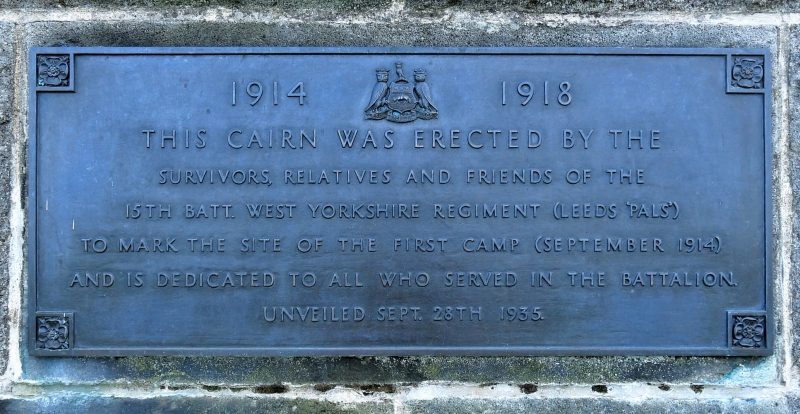 The memorial is set back on the south side of the road at Breary Banks. It comprises a tall, broad, tapered pylon of rusticated stone blocks, square on plan. A rectangular bronze plaque fixed to the front face of the memorial, decorated with the York rose to each corner and the City of Leeds coat of arms, records the inscription 1914 1918/ THIS CAIRN WAS ERECTED BY THE/ SURVIVORS, RELATIVES, AND FRIENDS OF THE/ 15TH BATT. WEST YORKSHIRE REGIMENT (LEEDS ‘PALS’)/ TO MARK THE SITE OF THE FIRST CAMP (SEPTEMBER 1914)/ AND IS DEDICATED TO ALL WHO SERVED IN THE BATTALION./ UNVEILED SEPT. 28TH 1935.

The memorial to the 15th Battalion West Yorkshire Regiment, 'the Leeds Pals', was unveiled on 28 September 1935 in commemoration of all those men who had served in the Battalion. It marks the site of the first camp in which they trained.

The recruitment of a ‘Leeds City Battalion’ was set in motion by Lt-Col J Walter Stead, a Leeds solicitor and former commanding officer of the 7th Battalion (Leeds Rifles), The Prince of Wales’ Own (West Yorkshire Regiment). In response to the example set in Liverpool, where in August 1914 over 3,000 men answered the call for friends to join up together for Kitchener’s New Army, the Leeds Pals formed the 15th Battalion of the West Yorkshire Regiment. This was one of 96 Pals and City battalions, units raised by private bodies and local authorities that provided the necessary clothing, billeting and food whilst the army provided weapons and training.

Leighton Construction Camp (Colsterdale Camp), originally established for the various intended works resulting from the 1901 Act of Parliament for the storage of water for Leeds Corporation, was put at the new Battalion’s disposal by Leeds City Council. The recruits arrived in September 1914. In the Summer of 1915 the battalion became part of 93 Brigade in the 31st Division of the Fourth Army. In December of that year the men were sent to Egypt to defend the Suez Canal as part of the Imperial Strategic Reserve. They were relieved by troops being evacuated from Gallipoli, sailing for the south of France in March 1916 to play a part in the Battle of the Somme.

In the assault on the German lines on 1 July 1916, following an intense artillery bombardment, 31st Division (in which every Battalion was formed of ‘Pals’) was to attack and take the village of Serre. The 15th Battalion, advancing at 7.30am on 1 July, was decimated by German artillery and machine gun fire. Every officer was killed or wounded, 233 other ranks were killed or died of wounds, 267 were wounded and 181 were missing. There were only 47 uninjured soldiers. The dead and wounded were brought in from No Mans’ Land for several days. The Battalion was re-formed. In December 1917 it was amalgamated with the 17th Battalion to form 15/17 Battalion, West Yorkshire Regiment.

The memorial at Colsterdale Camp, built close to the site of the camp’s chapel, was unveiled by Lt-Col Stead and dedicated by Reverend CR Chappell, padre of the Battalion from 1914 to 1918 and in 1935 Vicar of Skipton. The ceremony was attended by civic dignitaries and nearly 300 members of the Pals Association with relatives and friends. It was the twenty-first anniversary of the assembly of the Battalion at the camp.

The memorial to the 15th Battalion West Yorkshire Regiment (The Leeds Pals), which stands on Breary Banks, is listed at Grade II for the following principal reasons:
* Historic interest: as an eloquent witness to the tragic impact of world events on the City of Leeds, and the sacrifice it made in the First World War;
* Architectural interest: a rugged memorial on the high moorland;
* Historic association: the memorial marks the location of the first training camp of the c1,275 men who formed the original Leeds Pals Battalion.