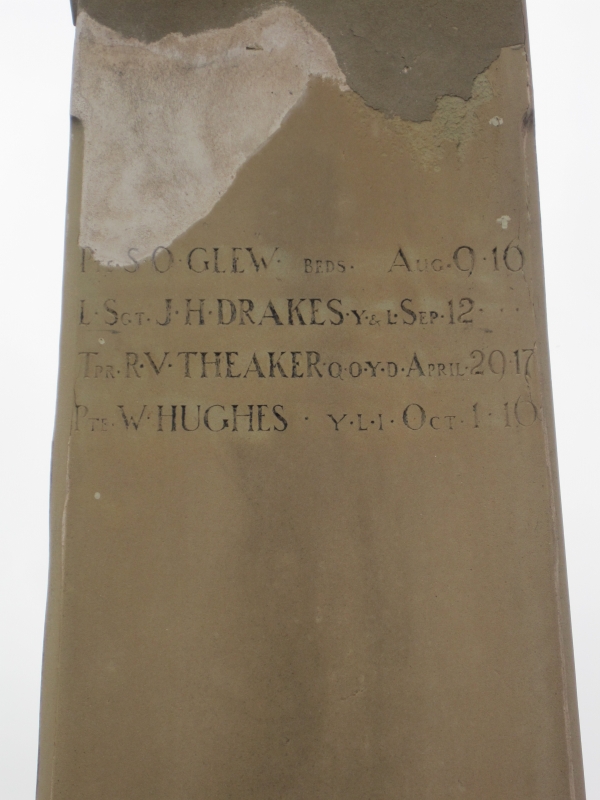 DESCRIPTION: The Men of Belton War Memorial is located on the corner of King Edward Street and High Street, Belton. The memorial consists of a carved figure of a First World War soldier with webbing and a rifle, wearing a cap and standing on a stone outcrop. The statue is rising from a square sandstone pillar with incised, painted First World War names and a limestone plinth and stepped base. The inscription on the limestone plinth reads ERECTED/ BY PUBLIC SUBSCRIPTION/ TO THE GLORIOUS MEMORY OF/ THE MEN OF BELTON/ WHO LOST THEIR LIVES IN/ THE GREAT WAR/ 1914-1918/ LEST WE FORGET/ KIPLING. There is a stone carved book mounted onto the lower step with 1939 – 1945 and the names of the fallen from the Second World War engraved into it.

The memorial stands within an area defined by spiked iron railings.

The aftermath of the First World War saw the biggest single wave of public commemoration ever with tens of thousands of memorials erected across England. One such memorial was raised at Belton as a permanent testament to the sacrifice made by the members of the local community, who lost their lives in the First and Second World Wars. The memorial was constructed by Tyas and Guest, Swinton and was unveiled in 1919. The names of the fallen from the Second World War were added at a later date.

In 2013 the memorial was conserved with the help of grant aid from War Memorials Trust.

The firm of Messrs Tyas and Guest were responsible for a number of war memorials, including the Grade II-listed monuments at Stainforth (NHLE 1192765) and Coronation Park, Conisburgh (NHLE 1286420), both of which feature similar statues of soldiers raised on tall, square, columns.

Belton War Memorial, which stands at the junction of King Edward Street and High Street, is listed at Grade II for the following principal reasons:
* Historic interest: as an eloquent witness to the tragic impact of world events on the local community, and the sacrifice it made in the conflicts of the C20;
* Architectural interest: a tall and imposing memorial incorporating the figure of a First World War soldier.