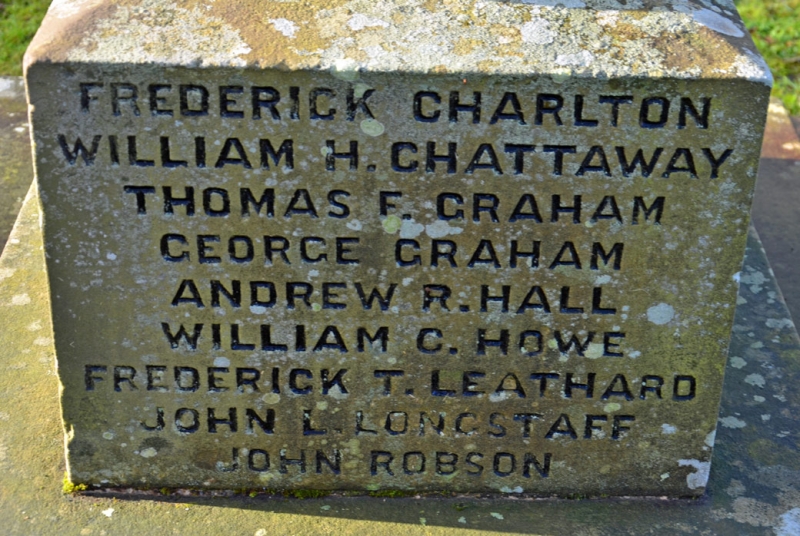 The memorial stands at the east end of the village green in an enclosed area, in close proximity to a number of Grade II-listed buildings, including the C19 drinking fountain and the Church of the Holy Trinity. It takes the form of a tall Celtic cross. The front face of the wheel-head is ornamented with interlace patterns carved in relief and a central hemispherical boss. The tapering cross shaft rises from a small pedestal, rectangular on plan, that stands on a three-stepped base.

The principal dedicatory inscription on the front face of the pedestal reads: TO THE GLORY OF GOD/ AND IN GRATEFUL REMEMBRANCE OF THE MEN/ OF THIS PARISH WHO GAVE THEIR LIVES FOR/ KING AND COUNTRY IN THE GREAT WAR/ 1914 – 1918/ (4 NAMES). The remaining names are inscribed on the two side faces of the pedestal.

The aftermath of the First World War saw the biggest single wave of public commemoration ever with tens of thousands of memorials erected across the country. This was the result of both the huge impact on communities of the loss of three quarters of a million British lives, and also the official policy of not repatriating the dead: therefore the memorials provided the main focus of the grief felt at this great loss. One such memorial was raised at Matfen as a permanent testament to the sacrifice made by the members of the local community who lost their lives in the First World War.

The memorial cross was unveiled on 1 May 1920 by Lt-Col Sir Percy Wilkinson and dedicated by the vicar, Reverend H Doudney. Made by William Cresswell of Hexham, the memorial commemorates 22 local servicemen who died in the First World War. Following the Second World War a further three names of men who died in that conflict were added.

William Creswell of Hexham, stone mason, was also responsible for the freestanding war memorial at Hexham (Grade II-listed), and for war memorials in the village hall, Langley-on-Tyne, and in St Mary’s Roman Catholic Church, Hexham.

Matfen War Memorial, which stands on the village green, is listed at Grade II for the following principal reasons:
* Historic interest: as an eloquent witness to the tragic impact of world events on this local community, and the sacrifices it has made in the conflicts of the C20;
* Architectural interest: an elegant cross decorated with carved interlace patterns, in the Celtic style;
* Groups value: with numerous Grade II-listed buildings around the village green.