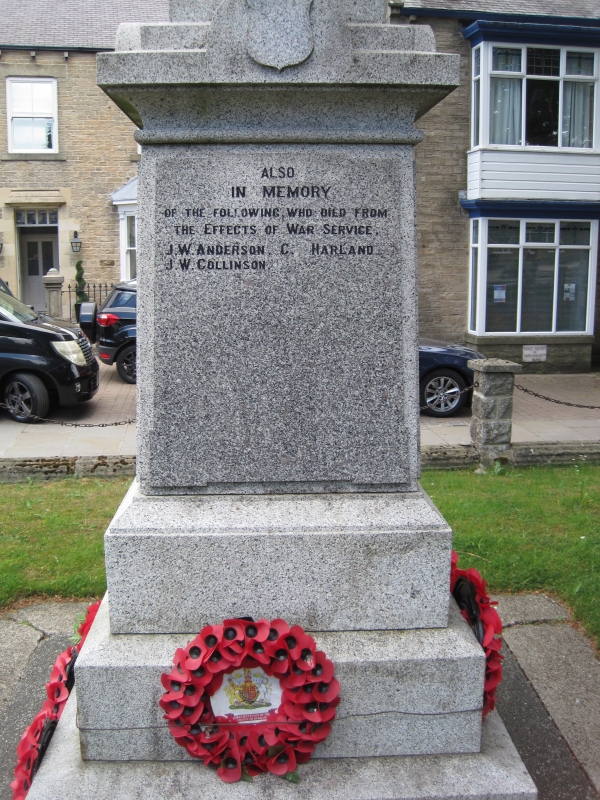 The memorial stands towards the north-western end of Horsemarket in a triangular green. It is approached by a paved path* from the road. The green is enclosed by a low stone wall with piers, from which hang spiked chains. The memorial takes the form of a tall obelisk, square on plan, which rises from the corniced cap of a pedestal. The pedestal stands on a three-stage base.

A small wreath is carved in relief to the front face of the obelisk, whilst the cornice below includes a small shield carved in low relief to each side. Each face of the pedestal bears inscriptions:

(south-east) ERECTED/ IN GRATEFUL MEMORY OF/ THE FALLEN, AND IN HONOUR/ OF THOSE WHO SERVED/ BY THE INHABITANTS OF/ MIDDLETON-IN-TEESDALE/ 1921

(south-west) ALSO/ IN MEMORY/ OF THE FOLLOWING, WHO DIED FROM/ THE EFFECTS OF WAR SERVICE./ (NAMES)

The front face of the upper stage of the base is inscribed “GREATER LOVE HATH NO MAN THAN THIS,/ THAT A MAN LAY DOWN HIS LIFE/ FOR HIS FRIENDS.”

* Pursuant to s.1 (5A) of the Planning (Listed Buildings and Conservation Areas) Act 1990 (‘the Act’) it is declared that this aforementioned feature is not of special architectural or historic interest.

The aftermath of the First World War saw the biggest single wave of public commemoration ever with tens of thousands of memorials erected across England. This was the result of both the huge impact on communities of the loss of three quarters of a million British lives, and also the official policy of not repatriating the dead: therefore the memorials provided the main focus of the grief felt at this great loss. One such memorial was raised at Middleton-in-Teesdale as a permanent testament to the sacrifice made by the members of the local community who lost their lives in the First World War.

The memorial was unveiled on 23 October 1921 by Lord Barnard, and dedicated by Reverend W Sumner. It commemorates 32 local servicemen who were killed in action during the First World War and a further three who died as a result of their war service. The monument, supplied by Dalbeattie Granite Works, cost £400 including enclosing its green on Horsemarket. Following the Second World War the names of 10 men who died in that conflict were added.

Middleton-in-Teesdale War Memorial, which stands in Horsemarket, is listed at Grade II for the following principal reasons:
* Historic interest: as an eloquent witness to the tragic impact of world events on this local community, and the sacrifice it has made in the conflicts of the C20;
* Architectural interest: an elegant obelisk in the Classical style, with a contemporary enclosure.