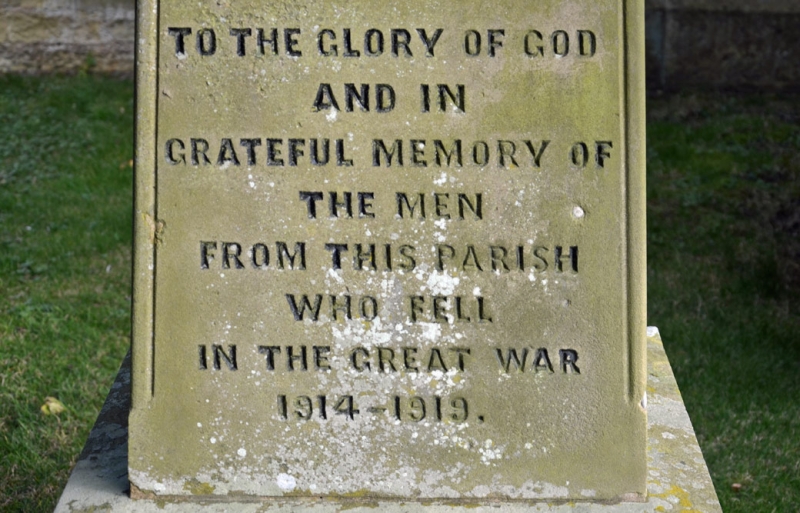 The c3m tall memorial stands in the churchyard of All Saints’ Church (not listed), to the north-west of the church tower. It takes the form of a wheel-head cross in sandstone from Denwick Quarry. The cross shaft rises from a tapering pedestal, which stands on a two-stage base.

The principal dedicatory inscription to the front face of the pedestal reads TO THE GLORY OF GOD/ AND IN/ GRATEFUL MEMORY OF/ THE MEN/ FROM THIS PARISH/ WHO FELL/ IN THE GREAT WAR/ 1914-1918. The commemorated names are listed on the front face of the upper stage of the base, below which on the lower stage is recorded THIS MONUMENT IS ERECTED BY THE/ INHABITANTS OF RENNINGTON AND DISTRICT.

The aftermath of the First World War saw the biggest single wave of public commemoration ever with tens of thousands of memorials erected across England. This was the result of both the huge impact on communities of the loss of three quarters of a million British lives, and also the official policy of not repatriating the dead: therefore the memorials provided the main focus of the grief felt at this great loss. One such memorial was raised at Rennington as a permanent testament to the sacrifice made by the members of the local community who lost their lives in the First World War.

The memorial was unveiled on 10 April 1921 by Dr G Scott Jackson CBE DSO and dedicated by Canon Mangin. It commemorates nine local servicemen who died in the First World War. The memorial was made by Messrs T Watson of Alnwick and funded by the local residents. Originally it stood at a roadside location but in c1957 it was moved c150m to the south-east to stand in the churchyard. In 2014 it was refurbished by local stone mason Bart Endean to mark the centenary of the start of the First World War.

The firm of Messrs Watson, monumental masons of Alnwick, was also responsible for war memorial crosses at Eglingham (Grade II) and South Charlton, and the war memorial tablets at Newton on the Moor and Ingram.

Rennington War Memorial, which stands in the churchyard of All Saints’ Church, is listed at Grade II for the following principal reasons:
* Historic interest: as an eloquent witness to the tragic impact of world events on this local community, and the sacrifice it has made in the First World War;
* Architectural interest: a simple yet poignant war memorial cross in a local stone type;
* Degree of survival: unusually the memorial has not been adapted for Second World War commemoration, and thus retains its original design intent.