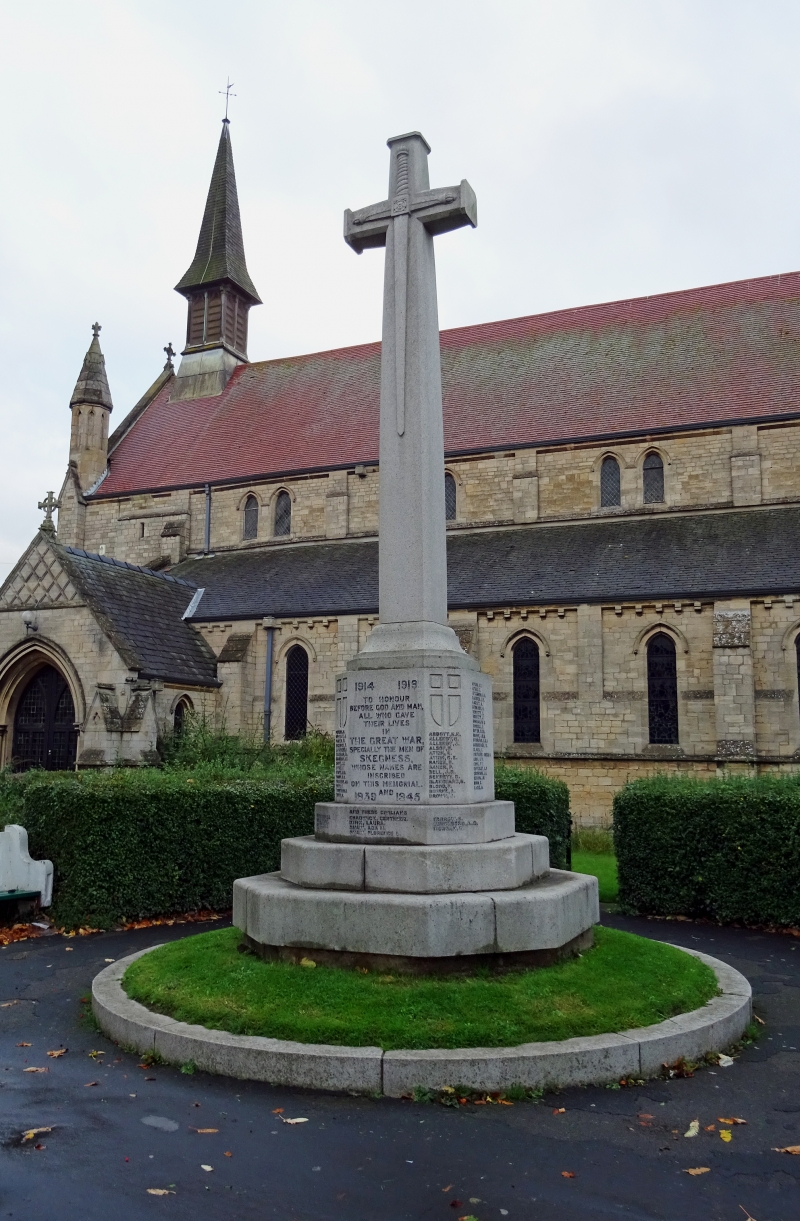 Skegness War Memorial is located on the S side of the Church of St Matthew on a small raised circular area. It consists of a stone Latin cross bearing a Sword of Sacrifice on the front face. It is set upon a tapering shaft with moulded base set upon an octagonal plinth. The plinth is set upon a three-stepped octagonal base.

The faces of the plinth bear the names of the fallen in lead lettering and carry carved shield details on alternating faces. The front face carries the inscription 1914 1919/ TO HONOUR/ BEFORE GOD AND MAN,/ ALL WHO GAVE/ THEIR LIVES/ IN/ THE GREAT WAR,/ SPECIALLY THE MEN OF/ SKEGNESS,/ WHOSE NAMES ARE/ INSCRIBED/ ON THIS MEMORIAL/ AND/ 1939 1945. Below this on the top step is the additional dedication AND THESE CIVILIANS. The names of the civilians are recorded below this dedication and on two further sides of the step.

One such memorial was unveiled at Skegness on 15 November 1923 by the Earl of Yarborough, the Lord Lieutenant of Lincolnshire, and dedicated by Bishop J Taylor Smith CB CVO DD, Chaplain-General to the Forces as a permanent testament to the sacrifice made by the members of the local community, who lost their lives in the First World War. It commemorates 71 local servicemen who fell during the First World War.

Following the Second World War, a dedication was added to commemorate the 57 fallen servicemen of that conflict and a further 11 civilians.

Skegness War Memorial is listed at Grade II for the following principal reasons:
* Historic interest: as an eloquent witness to the tragic impact of world events on this local community, and the sacrifice it has made in the conflicts of the C20;
* Architectural interest: an ornate and striking Latin cross with carved decorative details;
* Group value: with the Church of St Matthew (Grade II).