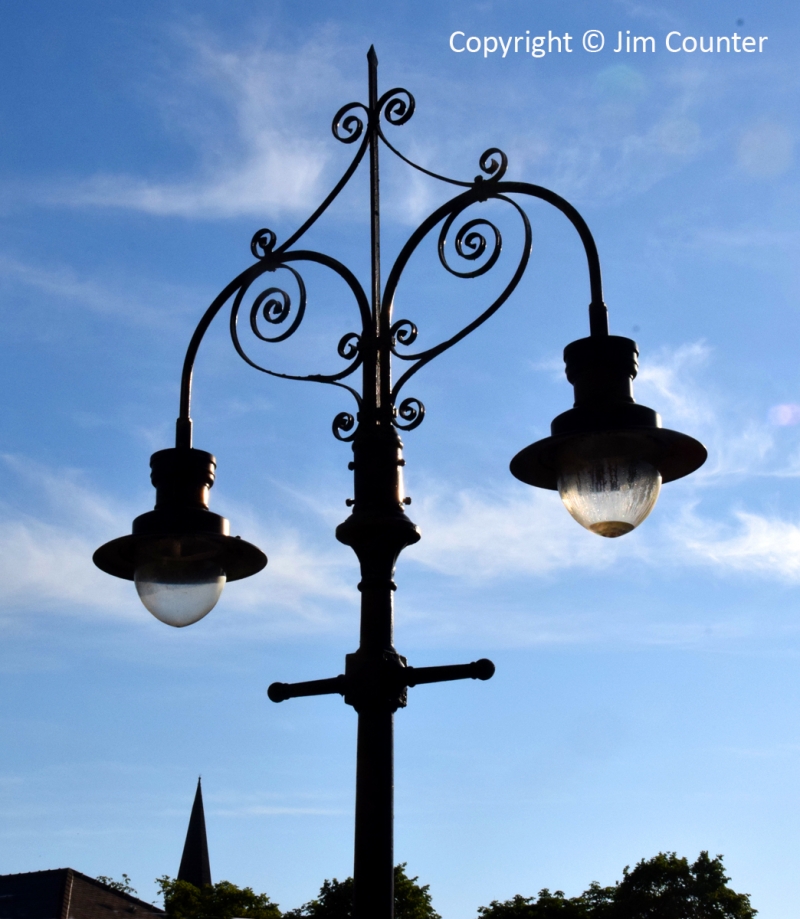 FORM: a tall, cast iron post with a cylindrical base including an access door featuring the Harrogate coat of arms. Above this there is a series of bands leading to a beaded ring from which rises a pair of acanthus leaves which clasp the flared bottom of the post. After four further bands, including a flange and a crown of palm leaves, the post is a plain circular column until it reaches a square block which supports the ball-ended ladder supports. The top of the post is bell-ended, carrying further embossed decoration. The modern supports for the replacement light fittings are attached to the post above this point, being scroll work formed from steel rather than cast or wrought iron, the pair of lanterns being based on the early C20 ‘Rochester’ design.

Harrogate’s first electric powered street lamps were installed in 1899, just two years after electricity first became available in the town. The design of these lamp posts is thought to have been based on gas lamp posts installed in Victoria Avenue in the 1860s by the Victoria Park Company, being much taller than those installed by the Harrogate Gas Company from 1848 onwards. It is not known when this particular example was installed. The lanterns, with their supporting brackets, are late C20 replacements.

The street lamp post outside 90 Station Parade is listed Grade II for the following principal reasons:

Historic interest:
* Date: as an early example of a lamp post designed for electricity, the design being specific to Harrogate and dating from 1899, one of only eight of this design thought to survive in the town;

Architectural interest:
* Design: for the interest of its elaborate decorative treatment, the design being a good example of Victorian mass-produced yet decorative street furniture, and a relatively early design intended for electricity.