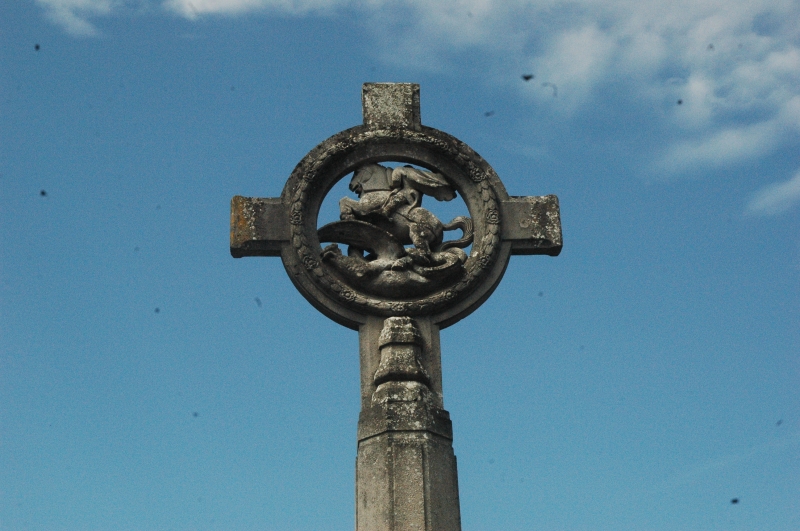 The memorial stands on the south side of Odiham High Street, facing north, and adjacent to numerous listed buildings flanking the High Street. The memorial is flanked by grass verges, and comprises a tall limestone wheel-head cross with low brick piers and detached side walls, standing on a three-stepped platform.

The circlet of the large wheel-head cross, surmounting a tapering octagonal cross shaft, includes a wreath carved in relief. The cross head is pierced, enclosing a carving of St George, mounted, in the act of killing the dragon. The cross shaft rises from a two-stage pedestal. The front face of the pedestal is ornamented with an oval wreath carved in relief, encircling a reversed broadsword with a decorated hilt. The principal dedicatory inscription, below this wreath, reads TO THE/ GLORIOUS MEMORY/ OF THE MEN & WOMEN OF THE/ PARISH OF ODIHAM WHO GAVE/ THEIR LIVES FOR THEIR KING &/ COUNTRY IN THE GREAT WAR/ 1914 - 1919/ PROUD AND GRATEFUL THEIR/ FELLOW PARISHIONERS HAVE/ HERE RECORDED THEIR NAMES.

The pedestal is flanked to east and west by two short red brick walls, coped, and terminating in stone piers. Each of these piers carries two stone panels. The eastern panels record the details (name, rank, regiment or unit) of 35 First World War casualties, whilst the western panels list 32 and two female casualties who died in 1917, one of whom was a munitions worker, the other serving in the Voluntary Aid Detachment.

A chain extending from each pier joins to the memorial extension. This extension is the same to each side, built in stone and brick, comprising detached side walls that project as far as the lowest step. The lower and upper sections of the walling are coped, and the upper sections carry north-facing stone panels. The eastern panel is inscribed 1939 – 1945/ (15 NAMES), and the western panel KILLED BY ENEMY/ ACTION IN ODIHAM/ OCT.1940/ (5 NAMES).

The aftermath of the First World War saw the biggest single wave of public commemoration ever with tens of thousands of memorials erected across England. This was the result of both the huge impact on communities of the loss of three quarters of a million British lives, and also the official policy of not repatriating the dead which meant that the memorials provided the main focus of the grief felt at this great loss. One such memorial was raised at Odiham as a permanent testament to the sacrifice made by the members of the local community who lost their lives in the First World War.

Funded by public subscription, the memorial was designed by the architect Mr P Morley-Horder, and unveiled on 3 July 1920 by Viscount Woolmer MP. Morley-Horder FRIBA (1870-1944) also designed Royston War Memorial (Hertfordshire, Grade II-listed). Odiham’s war memorial was erected in an area known as Gospel Green, where it is alleged Charles Wesley once preached.

An extension to the war memorial was added after the Second World War to record the details of the 14 men and one woman who lost their lives in that conflict, as well as the names of civilian casualties. The extension was designed by the architect CL Gill ARIBA (1880-1960) who lived close to the memorial at The White House (Grade II*).

In 1999, granite panels recording the commemorated names were applied to the memorial’s piers, overlaying the original inscriptions. Restoration work was carried out in the year 2000 as part of the Odiham Millennium Project.

Odiham War Memorial, which stands on the High Street, is listed at Grade II for the following principal reasons:

* as an eloquent witness to the tragic impact of world events on this local community, and the sacrifice it has made in the conflicts of the C20;