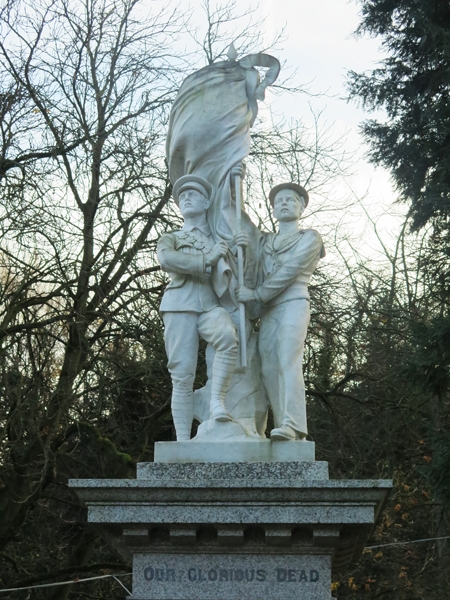 A war memorial of 1921, with a marble sculpture carved by Italian company Fedele Andreani and Fratelli, the remainder of the memorial by masons James Beresford & Sons of Belper.

DESCRIPTION: The memorial comprises a Carrara marble sculpture of a soldier and sailor standing astride a cairn and carrying a billowing Union Flag. It is placed on a pedestal composed of a granite pillar with a moulded and dentilled cornice and corner pilasters, on a granite plinth with laurel wreath in relief, itself set atop a stepped ashlar base. The whole is surrounded by a low circular kerb.

This List entry has been amended to add the source for War Memorials Online. This source was not used in the compilation of this List entry but is added here as a guide for further reading, 27 February 2018.

The concept of commemorating war dead did not develop to any great extent until towards the end of the C19. Prior to then memorials were rare and were mainly dedicated to individual officers, or sometimes regiments. The first large-scale erection of war memorials dedicated to the ordinary soldier followed the Second Boer War of 1899-1902, which was the first major war following reforms to the British Army which led to regiments being recruited from local communities and with volunteer soldiers. However, it was the aftermath of the First World War that was the great age of memorial building, both as a result of the huge impact the loss of three quarters of a million British lives had on communities and the official policy of not repatriating the dead, which meant that the memorials provided the main focus of the grief felt at this great loss.

The Matlock Bath war memorial was unveiled by Mr Frederic Arkwright and dedicated by Rev W Askwith on Sunday 1 May 1921 at a ceremony presided over by Mr J W Boden. 35 wreaths were laid around the memorial after the service. The sculpture was carved by Fedele Andreani & Fratelli and the mason for the memorial was James Beresford & Sons of Belper (the latter are named on the face of the plinth): the whole memorial cost £710. This information was recorded in The High Peak News and later on a hand-written file note held by the District Council (the note itself being many years old). The memorial was updated following the Second World War at which time the north-face inscription was replaced. It originally held 22 names and a further 10 names were added following the Second World War. The Matlock Bath design was later used by James Beresford & Sons for similar war memorials in Cannock (unveiled in May 1923) and Scunthorpe (November 1926). The war memorial is maintained by the Parish and the District Council.

The Matlock Bath war memorial in Derbyshire, unveiled in 1921, is listed at Grade II* for the following principal reasons:

* as an eloquent witness to the tragic impact of world events on this community, and the sacrifices it made in the conflicts of the C20.

* as an outstanding example of its type, with confident and highly competent use of classical architectural forms and motifs to form a well-proportioned and sophisticated composition;
* for the extremely high quality of the Carrara marble sculpture as both a visually striking and poignant work of art.