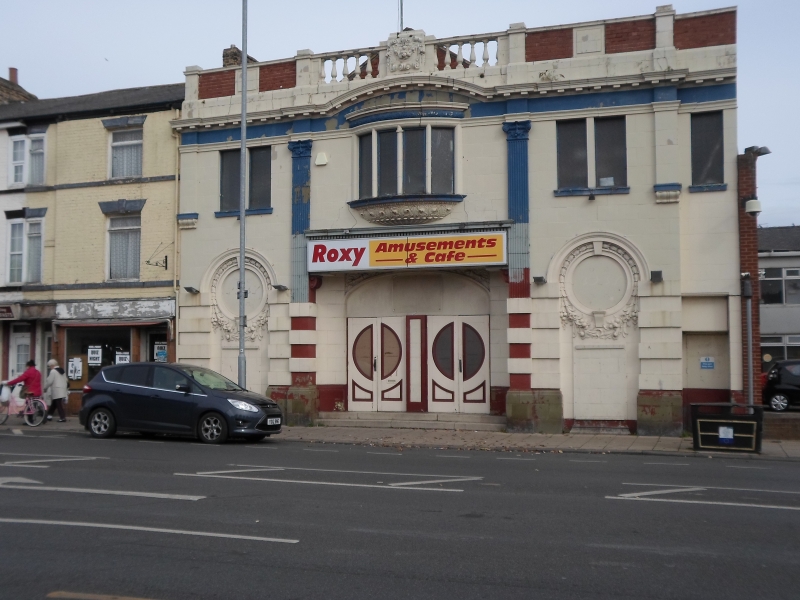 A cine-variety theatre, 1912, built on the site of a mid-C19 Temperance Hall and possibly including part of that structure, now an amusement arcade.

A cine-variety theatre, 1912, built on the site of a mid-C19 Temperance Hall, now an amusement arcade.

PLAN: the building has a sub-rectangular plan, it is aligned roughly east by north-east to west by south-west, with the front elevation located at the south-western end, facing onto Quay Road.

FRONT ELEVATION: a two-storey, three and a half bay wide Baroque-style façade, with a plain band rusticated ground floor, raised on an ashlar stone plinth. The first floor is built of painted ashlar blocks, it has a plain frieze dentil cornice and a parapet wall above that has shallow fair-faced brick wall returns. A garlanded scroll motif occupies the centre of the balustrade, and the cornice forms a segmental arch over the central bay. The central bay is flanked by over-painted, pale green faience and fluted Corinthian pilasters; the ground-floor is occupied by the main entrance, and the first floor has a central bow window, which has four obscured glass panels, a decorated foliate faience plinth, and a canopy with a pulvinated frieze. The main entrance is approached by two steps; it consists of a pair of outward opening glazed half-moon double doors with fielded panels, beneath a boarded-over fan light, set in a recessed depressed arch, with flaming torch motif spandrels. Scroll brackets to either side support the name panel above, which has a plain freeze and a dentil cornice, mounting a modern illuminated sign, which may obscure an original cinema name, or date stone. The two end bays have recessed ground-floor panels beneath moulded keyed round arches, containing blocked circular window recesses, each with a scroll bracket at the base, enclosed by garlanded swags, with a two-light window to the first-floor. The ends of the cornice are supported by plain pilasters that extend down as far as the sill level of the first-floor windows and are supported on double scroll brackets. The right-hand half bay end is occupied by a fire door with a single panel window above.

REAR and SIDE ELEVATIONS: two-storey, fair-faced brick construction. The rear north-eastern wall has a pair of blocked window positions to the first floor and a pair of fire doors to the ground-floor. The north-western side elevation is plain and partially painted, it has no openings and it abuts 256 Quay Road. The south-eastern side elevation comprises a tall secondary 5-bay, fair-faced, brick pier and panel wall, with the fifth bay obscured by 248 Quay Road.

INTERIOR:(not inspected: description from other sources)

ENTRANCE FOYER: a pair of glazed half-moon double doors lead into a rectangular-plan foyer, formerly occupied by a ticket booth and concessions stand. It has a low plain ceiling, with a pair of square columns situated to either side of the thoroughfare, leading to the glazed half-moon double auditorium door. A dog-leg stairway rises at either side of the foyer, the one on the right rising up to the first-floor circle foyer and the one on the left functioned as an exit down from the circle.

CIRCLE FOYER and CIRCLE: the circle foyer is a relatively small rectangular space at the head of the stairway; a door immediately to the right at the head of the stairs leads to a narrow L-plan foyer, which turns to span the full width of the building to the rear of the circle, while straight ahead, a door gives access to modern toilet facilities. A doorway on the left allows access into the circle, which is devoid of seating and used as a store. The three-facetted balcony front is decorated with simple moulding and is only visible from the auditorium. An exit door is situated at the north-western corner of the circle.

AUDITORIUM and FORMER STAGE: the auditorium is a large rectangular-plan space, now - 2018 - used as an amusement arcade and cafe; it was originally intended to seat 400 persons in the stalls and the circle balcony. It retains a proscenium arch; however, the screen, stage, cinema organ, and all seating have been removed, with the stalls area occupied by gaming slot machines, and the former stage area by a cafe with modern tables and bench seating. A suspended ceiling has been inserted level with the circle balcony front; therefore the ceiling is not visible from the auditorium. The wing stage right, acts as a storeroom and fire exit, while the wing stage left functions as the kitchen and fire exit. A doorway in the south-western wall of the kitchen connects to a stair lobby, rising to the former first-floor changing room, now used as an office, and gives access to two ground-floor storerooms that run parallel to the auditorium. An emergency exit set centrally in the south-eastern wall of the auditorium, gives access into the smaller storeroom, which has a doorway that opens into the fire escape lobby, leading out onto Quay Road. The four-bay auditorium ceiling can be seen from the circle: it takes the form of a segmental arch supported by reinforced concrete arch ribs, with moulded sides and fruited foliate decorative plaster work in relief on the base. The second bay of the ceiling over the circle has a decorative plaster ventilation panel. Truncated fragments of a heavily moulded plaster cornice can be seen to either side of the proscenium arch, and a modern ventilation panel has been inserted through the wall above the proscenium arch.

Built as a Temperance Hall in 1854, it was sold in 1912, when a Mr Freeman bought the building and converted it into a cinema called the Picture House; it had 400 seats in the stalls and balcony, and an elaborate decorative street frontage, leaving little evidence of its original appearance. By 1913, it was re-named the Picturedrome. Following the First World War it was owned by Mr A Lawton and it was re-named the Adelphi Picture Theatre in 1924. The first British ‘Talkie’ was released in June 1929 and given that the Adelphi was a relatively small provincial cinema, new sound equipment, which was a new technology and a major investment at the time, was installed one year later in 1930 by British Eastern Electric. The cinema was sold once more in 1933 to Frederick M Harrop and when it was re-opened, new seating had been installed with a capacity of 497 patrons. The cinema was closed in 1941 and requisitioned for storage until 1945, and it did not re-open until after 1950, when it gained yet another name: The Roxy. With the growth in television viewing and patronage starting to decline, the cinema became a bingo hall in 1961, and it is believed that the last film was screened on 30 October 1961. By 2010, the building had become the Roxy Amusements and Café.

The building is attached to a terrace of three-storey shops to the north-west; it is screened by a tall red brick wall from a garage and forecourt to the south-east, and is bounded by the yards of terraced housing in Haverlock Crescent to the rear.

The former Picture House Cinema, Quay Road, Bridlington, opened in 1912, is listed at Grade II for the following principal reasons:

* opened in 1912, it is one of the earliest surviving cine-variety houses in England;
* the hybrid cine-variety house is a rare transitional type of theatre;
* it has a striking and exuberant Edwardian Baroque façade with good quality architectural faience dressings, which reflects its status as a palace of entertainment;
* despite some later-C20 alterations, the original plan-form is largely retained, or readable;
* it retains much of the original interior decoration, including the barrel-vaulted ceiling and balcony, which maintains stylistic continuity with the exterior;
* significantly the proscenium arch remains, allowing an appreciation of the depth of the original 'framed' theatrical stage.

* it was built at a watershed moment in the transformation of popular entertainment, representing the transition from the music hall to cinema.