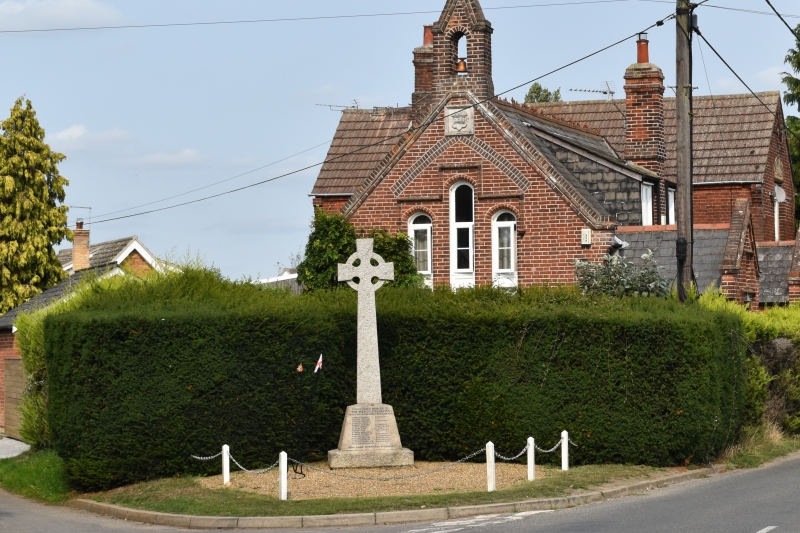 The memorial stands in a prominent position at a road junction, close to 31 and 32 Chapel Lane (Grade II- listed). It comprises a plain wheel-head cross with a tapering shaft, standing on a tapering plinth and single-stepped base. The memorial is carved from grey Cornish granite and stands approximately 2.7m tall.

The main inscription in raised leaded lettering on the front face of the plinth reads IN HONOURED MEMORY OF/ THE MEN OF THIS PARISH/ WHO FELL IN THE GREAT WAR 1914–1918/ (15 NAMES)/ THEIR NAME LIVETH FOR EVERMORE.

A further inscription in leaded lettering within a smooth recessed area to the east face of the plinth reads ALSO OF THOSE/ WHO FELL IN THE/ SECOND GREAT WAR/ 1939–1945/ (3 NAMES).

One such memorial was raised at Belstead as a permanent testament to the sacrifice made by 15 members of the local community who lost their lives in the First World War. The memorial was unveiled in November 1920 by Major Eustace Quilter. The names of three local servicemen who died during the Second World War were subsequently added to the memorial.

Belstead War Memorial, which stands at the junction of Chapel Lane and Grove Hill, is listed at Grade II for the following principal reasons:

* a simple yet poignant granite war memorial cross in the Celtic style.