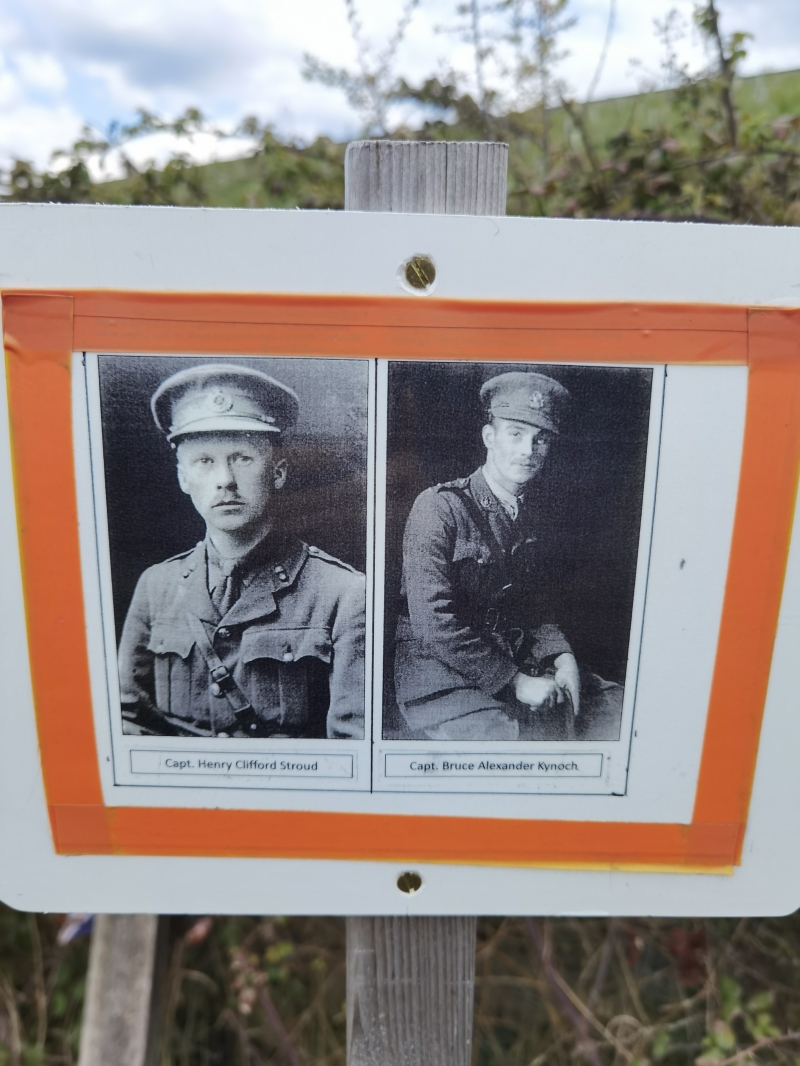 Two war memorials, erected around 1920, dedicated to two British pilots killed in service at this site during the First World War. Mid or late C20 posts and railings are excluded from the listing.

Two war memorials, erected around 1920, dedicated to two British pilots killed in service at this site during the First World War.

The memorial to Captain Henry Clifford Stroud has a rusticated granite plinth with the following inscription in low relief on its front (south) elevation THIS SPOT IS SACRED TO THE MEMORY OF / CAPT HENRY CLIFFORD STROUD, NRE AND RFC / KILLED IN ACTION AT MIDNIGHT / 7TH MARCH 1918 / FAITHFUL UNTO DEATH. A two-blade propeller is mounted on a detached metal post, which stands directly behind the plinth. Six square-plan stone markers are laid out around the plinth in a rectangular plan extending south. The memorial is bounded by six square-plan timber posts* (probably erected in the late C20), measuring approximately 3m x 1.8m, with a plain metal railing* linking the west, north and east sides. The six timber posts and railings are not of special architectural or historic interest.

The memorial to Captain Stroud stands approximately 30m west of the A130, and 170m north of Monument Bridge (both constructed between 2002 and 2003).

The memorial to Captain Alexander Bruce Kynoch has a rusticated granite plinth, and bears the following inscription in low relief on its east elevation SACRED TO THE MEMORY / OF / CAPT ALEXANDER BRUCE KYNOCK RAF / WHO WAS KILLED IN ACTION / HERE ON THE NIGHT OF / MARCH 7TH 1918 / AGED 24 YEARS. The plinth is bounded by kerb stones in a rectangular plan extending east of the plinth, measuring approximately 1.8m x 1m. The kerb stones are bounded by six reinforced-concrete posts*, linked by a low metal rail*, most likely added in the mid or late C20, and measuring approximately 2m x 1.2m. The six concrete posts and rails are not of special architectural or historic interest.

* Pursuant to s1 (5A) of the Planning (Listed Buildings and Conservation Areas) Act 1990 (‘the Act’) it is declared that these aforementioned features are not of special architectural or historic interest.

The aftermath of the First World War saw the biggest single wave of public commemoration ever with tens of thousands of memorials erected across England. This was the result of both the huge impact on communities of the loss of three quarters of a million British lives, and also the official policy of not repatriating the dead which meant that the memorials provided the main focus of the grief felt at this great loss. Two such memorials were raised at Dollyman’s Farm as a permanent testament to the sacrifices made by two British pilots killed in service at this site during the First World War.

Captain Alexander Bruce Kynoch (1894-1918) of No 37 Squadron of the Royal Flying Corps (formerly Duke of Wellington's Regiment), and Captain Henry Clifford Stroud (1893-1918) of No 61 Squadron of the RFC (formerly the Royal Engineers) set out from Stow Maries and Rochford respectively on the night of 7 March 1918 to intercept a German Gotha G V bomber heading for London. The two RFC aircraft suffered a fatal collision around midnight and crashed in adjacent fields at Rawreth. Captain Kynoch had served in Gallipoli, Egypt, and Macedonia, and was awarded the 1914 Star, the British War Medal and the Victory Medal, and was laid to rest in St Pancras and Islington Cemetery in north London. Captain Stroud served as a lieutenant on the Western Front from August 1914 to February 1915, where his legs were severely wounded, and was awarded the 1914-15 Star. He was appointed Instructor in Field Engineering and in Bombing at the Northern Bombing School at Otley, Yorkshire, and later earned his wings and captaincy in 1916. He was buried locally at St Andrew’s Church in Rochford, in a private grave, between four Commonwealth War Grave Commission's headstones.

Two memorials were erected around 1920 marking the spot where each pilot was found by William Woodburn Wilson of nearby Great Fanton Hall in North Benfleet who, accompanied by his sister Jean, was the first to arrive at the scene of the fatal crash. It is believed that Mr Wilson erected a nine-foot cross at each memorial, and each of the monuments is shown as a ‘Cross’ on the 1922 and 1939 Ordnance Survey (OS) maps. It appears these ‘crosses’ were formed of the propellers of the crashed planes, as Mr Wilson’s sister Jean referred to them as ‘propeller memorials’ in a letter published in Essex Countryside magazine in January 1960. In this letter, Ms Woodburn Wilson states: ‘When my brother sold the property he had it incorporated in the title deeds that these two small plots were not included in the sale, were still his property, and were to be forever held sacred.’ The propeller on the memorial to Stroud has reportedly suffered theft and been replaced on at least two occasions, and there is no propeller on the memorial to Kynoch.

The A130 was constructed approximately 30m west of the Stroud memorial between 2002 and 2003, with ‘Monument Bridge’ erected to carry the new road south over the Shenfield to Southend line of the Great Eastern Main Line (opened 1889). Comparison of historic OS maps (1922 and 1939) and aerial views (1999-2017) indicates that both memorials remain in their original positions.

The two war memorials at Dollyman’s Farm, erected around 1920, are listed at Grade II for the following principal reasons:

* as an eloquent witness to the tragic impact of world events on local communities, and the sacrifices made by these two British pilots who died in service during the First World War (1914-1918);

* as rare examples of memorials to British servicemen who died in training or service in Britain during the First World War.