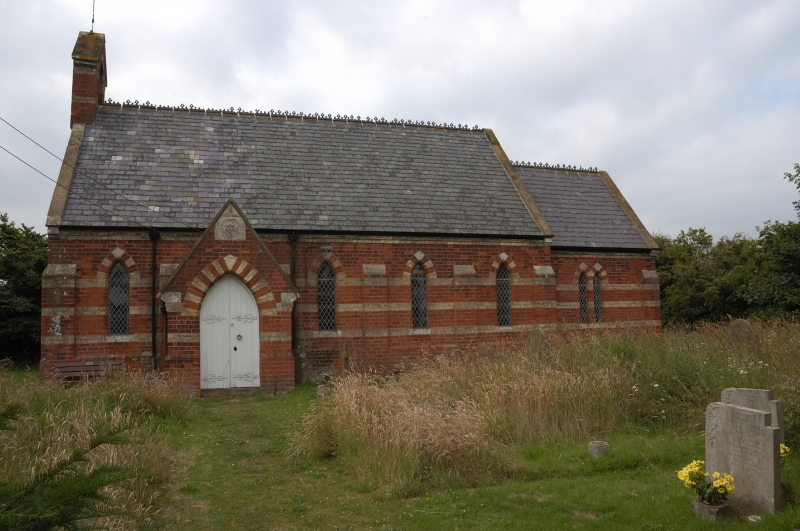 Church, now redundant and private dwelling, 1864 - 1865 to designs by William Burges. Converted to a dwelling in the early C21.

Church, now redundant and a private dwelling, 1864 - 1865 to designs by William Burges, converted to a dwelling in the early C21.

PLAN: a small church aligned east-west and standing in a small graveyard. The chancel has a north vestry and the nave has a south porch and west bellcote.

EXTERIOR: the church has a five-bay nave and a lower, single-bay chancel. It is built of red brick in Flemish bond with narrow bands of white brick and a white brick eaves cornice. The windows are pointed-arch lancets with stone sills and polychrome brick heads with stone keystones and small diamond-pane leaded glazing. There is a high plinth with a chamfered brick top and shallow buttresses with chamfered stone tops rising to define the bays. The nave and chancel roofs have stone coping and decorative ridge tiles. The south elevation faces the road. The nave has lancets to the first, third, fourth and fifth bays. The second bay has a small, gabled porch with stone coping and decorative ridge tiles to the slate roof. The gable apex has a decorative geometric carved stone. Beneath is a pointed arch doorway with a polychrome brick head and stone keystone, and double timber doors with decorative iron strap hinges. At the west end of the roof is a polychrome brick bellcote with an iron cruciform finial. The chancel has a paired-lancet window.

The east gabled wall of the chancel has a tripartite window of three pointed-arch lancets, the central lancet slightly taller, with a stone sill, polychrome brick heads with stone keystones and an overarching polychrome pointed arch set into the brickwork of the wall.

The west gabled wall of the nave has a similar tripartite lancet window with a stone sill, polychrome heads and an overarching polychrome pointed arch set into the brickwork of the wall. The gable apex is surmounted by the bellcote.

INTERIOR: the interior was not inspected.

The present Church of St Helen was preceded by a church which was certainly medieval in origin; it is known that Kilnsea had a church by the beginning of the C12. By the early C19 coastal erosion of the soft boulder clay left the church teetering on the edge of the cliff. In 1824 the chancel fell into the sea, followed over the next few years by the rest of the building, with the remaining tower falling over the edge in 1831. Services continued to be held at Kilnsea, despite the lack of a church, with a room in a farmhouse rented as a temporary measure.

In 1864 - 1865 a new church was built to replace the earlier church, initiated by John Ombler, Board of Trade superintendent of the Spurn beach and sea defence works, who had apparently been the last person baptised in the old Church of St Helen. He was instrumental in raising funds and oversaw the building of the church, subsequently becoming a church warden for 35 years until his death in 1895. The land was provided by the patron, Leonard Thompson Esq, and the Yorkshire Gazette, reporting upon the consecration of the new church by the Archbishop of York on 21 April 1865, recorded the ‘great liberality of Mr A Burges, C E of Blackheath, who having occasionally passed the place on his professional visits to Spurn Point and struck by the poverty of the place, having heard that an effort was being made for building a church, most kindly offered plans free of expense, and gave £150 towards the completion’. Alfred Burges was a marine engineer and partner in the engineering firm of Messrs Walker and Burges. His partner, James Walker, was Chief Engineer for Trinity House, the body responsible for lighthouse construction in Great Britain, who had funded the construction of the new Low Lighthouse at Spurn Point in the 1850s. The plans were drawn up by Burges’ two sons, notably his eldest son, the architect and designer William Burges. The church cost £420 and was built of red brick with white brick bands, limestone dressings from stones from the earlier church, and a Westmorland slate roof. The interior contained seating for 100 people and was recorded as having an open roof with principal rafters of best stained deal resting on corbel stones, with a floor of Staffordshire tiles. The plain medieval font from the old church was reinstalled.

The church served the parish for 130 years, although congregations were never large. The establishment of military camps at Kilnsea and Spurn in the C20 did not draw many new worshippers as the army had its own chapel. The church was declared redundant in 1993 due to falling congregations and the last service was held on 20 June 1993. Planning permission was granted for conversion to a domestic dwelling in 2000.

William Burges (1827-1881) is a renowned architect and designer of the Gothic Revival whose philosophy was strongly influenced by A W N Pugin and who was friendly with most of the leaders of the Pre-Raphaelite movement. He had a diverse, but brief, career which included various types of architecture, including ecclesiastical buildings, secular buildings including Cardiff Castle and Castell Coch, Wales, painted Gothic (or Pre-Raphaelite) furniture, stained glass, jewellery and metalwork. Burges never ran a big office and he designed relatively few churches in England, the majority of which are listed at a high grade. He died unexpectedly in 1881 aged 53.

The former Church of St Helen, Kilnsea, of 1864 - 1865 to designs by William Burges, is listed at Grade II for the following principal reasons:

* the polychrome brickwork of the exterior characterises Burges’ aesthetic appreciation of decoration to embellish and enrich his buildings.

* the church plans, and £150, were gifted by Alfred Burges, William’s father and a respected marine engineer, who was struck by the poverty of Kilnsea, which he occasionally passed through when working at Spurn Point;

* the church was built at the instigation of John Ombler, superintendent of the Spurn beach and sea defences, to replace Kilnsea’s previous church, which had collapsed into the sea.