A Grade II Listed Building in Dilwyn, County of Herefordshire 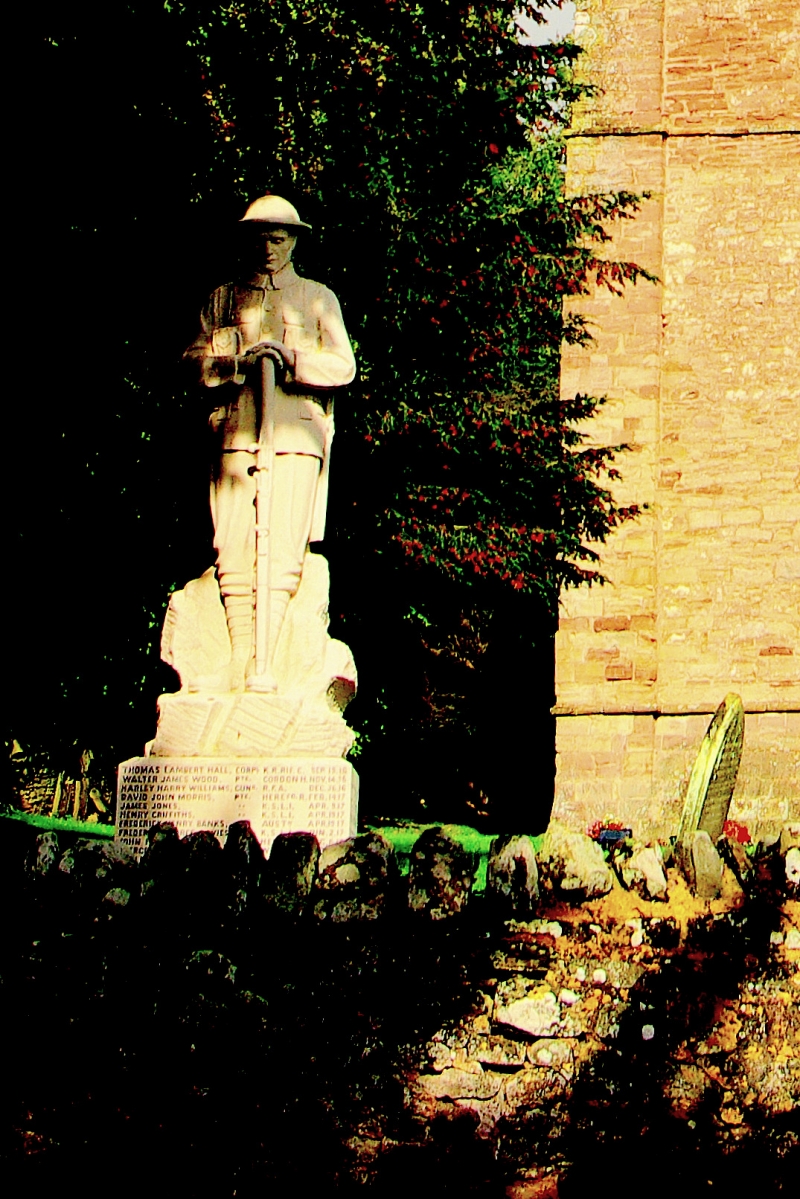 PLAN: the memorial, which stands on a square base with a concentric border, is located at the entrance to the churchyard of the Church of St Mary.

DESCRIPTION: the memorial comprises a statue of a soldier in mourning, his head bowed and hand resting on a reversed rifle. The statue is mounted on a plinth and base, and is surrounded by a low wall.

The main inscription, which is on the eastern side of the plinth, in incised and black-painted lettering, reads: ‘TO THE HONOUR AND GLORY / OF GOD, AND IN GRATEFUL / REMEMBRANCE OF THE MEN / OF THIS PARISH WHO MADE / THE SUPREME SACRIFICE / IN THE GREAT WAR, AND / WHOSE NAMES ARE WRITTEN / HERE, THIS MEMORIAL IS / ERECTED BY THEIR RELATIVES / AND FRIENDS.’ On the south face of the plinth and the base are the names of the fallen soldiers, and the dedication to those lost in the Second World War.

The aftermath of the First World War saw the biggest single wave of public commemoration ever with tens of thousands of memorials erected across England. This was the result of both the huge impact on communities of the loss of three quarters of a million British lives, and the official policy of not repatriating the dead. Memorials, therefore, provided the main focus of the grief felt at this great loss.

One such memorial was raised at Dilwyn as a permanent testament to the sacrifice made by the members of the local community in the First World War. It was designed by WG Storr Barber of Leominster, and was unveiled in 1922.

William George Storr Barber (active 1908-1920s) was a monumental mason and sculptor originally based in Leominster. There, he carved the statue of St Ethelbert (1908) for the Catholic Church, as well as restoring the Old Town Hall (1909). He seems to have moved to the capital sometime between then and the early 1920s, for his statue for Leominster’s war memorial (1922) was modelled in his London studio. He was responsible for a number of memorials in the Hereford and Worcester area, including Craven Arms and Kimbolton.

As was a common occurrence, the names of the parishioners who fell during the Second World War were subsequently added to the memorial.

Dilwyn War Memorial is listed at Grade II, for the following principal reasons:

* a well-executed and evocative example of a soldier in mourning memorial by a skilful mason.

* with the nearby Church of St Mary, listed at Grade I.