A Category B Listed Building in Clydesdale North, North Lanarkshire 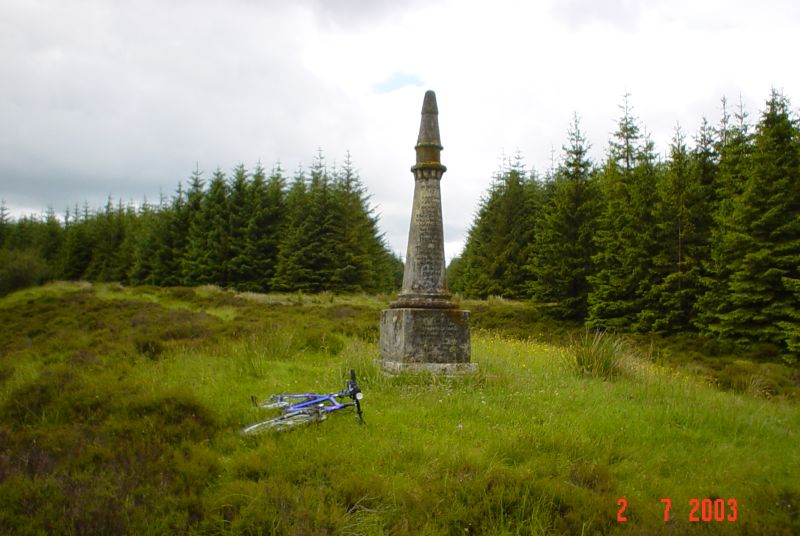 S faceshaft inscribed: IN MEMORY of CAMERON, CARGILL, RENWICK, And Their Brethren, Who worshipped, on this spot, In the time, of the last, persecution. They jeopardised, their lives, unto the death, in the high places of the field.

S face plinth inscribed: ERECTED, BY THE PROCEEDS, OF, A COLLECTION, MADE AT A SERMON, PREACHED HERE, BY THE, REV. JOHN GRAHAM, WISHAWTOUN, AUGUST 7TH 1836.

Cargill and Renwick were Covenanter martyrs who hid on Auchterhead Muir when on the run following the defeat of the Covenant army lead by James Graham of Claverhouse, Duke of Montrose. They are reputed to have worshipped at a secret chapel on the site of the monument and to have been hidden at nearby Darngavel Steading, now ruinous. Cambusnethan and the surrounding area of N. Lanarkshire have a strong historical connection with the Covenanters and was again an area of religious dissent in the 19th century leading up to the Disruption. The Covenanters or Cameronians changed their name to the Reformed Presbyterian Church in 1690 and today Wishaw is still home to one of only five RP congregations in Scotland. Sir Walter Scott's novel Old Mortality, based upon the wars of the Covenant, reports in the preface that Old Mortality was an old man Scott know in his youth who travelled around Scotland recarving the names on the headstones of the Covenant martyrs. There is some evidence that this tradition has been kept alive through to this day with freshly recarved headstones being noted in the graveyard at Cupar Old Kirk. In this light it is interesting to note that the inscription on the Darmead-Lin monument appears fresh and painted whilst the rest is under moss and lichen.